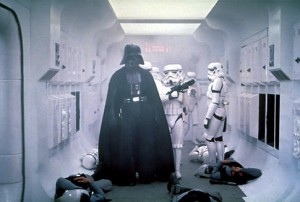 FILE–Darth Vader makes his entrance in the 1977 movie “Star Wars.” Director George Lucas did more than make history. “Star Wars” went on to become the second-highest grossing movie of all time, behind only “Titanic.” Lucas would also create a modern mythology which influenced a generation in Hollywood and two generations of fans.(AP Photo/ho)