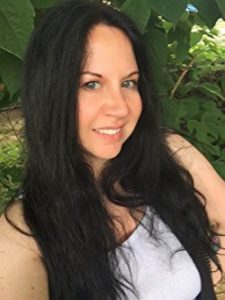 Lana Cooper doesn’t usually talk about herself in the third person, but makes an exception when writing an author bio.

In 2014, Cooper published her first novel, Bad Taste In Men, a humorous coming-of-age tale for awkward geeks who grew up in the ’90s.

Steeped in horror and humor, her short stories have appeared in several anthologies, including Test Patterns: Creature Features (2018), Enter the Apocalypse (2017), and Nocturnal Natures (2016). She is an Affiliate Member of the Horror Writers Association (HWA).

Cooper is currently working on her second full-length novel, cranking out pages at a pace somewhere between Joyce Carol Oates and George R.R. Martin.

In terms of non-fiction, Cooper has written extensively on a variety of pop culture topics for PopMatters, news stories for EDGE Media Network, and articles and reviews for female-driven horror fan site GhoulsOnFilm.

By day, Cooper eschews grunting and gesticulating wildly, instead “using her words” in her role as a Content Manager for a Philadelphia-based digital marketing firm. She has produced copy for clients spanning a wide range of industries, including mobile apps, Fortune 500 retailers, and healthcare providers.

When she’s not writing, Cooper enjoys comic books, talking to stuffed animals, and avoiding eye-contact with strangers on public transportation.