The last two years have been a real pisser, eh? Coming off another hard candy pandemic Christmas, feelings of weariness are mingled with a glimmer of cautious optimism. I’m still hopeful that 2022 has good things in store for all of us, if we’re so inclined to look for a silver lining. That said, do you know what else has a silver lining? Pickled herring!

Stay with me here.

Without belaboring the point of what a dumpster fire the past few years have been, it’s given all of us plenty of time to think. Happy memories offer a degree of solace and belief that the best days aren’t behind us. They’re also accompanied by thoughts of abandoned traditions to dust off in an attempt to lure a bit of good luck into the new year.

Desperate times call for desperate measures. And at this point, I’ll try anything if it means that 2022 is less of a Festival of Fuckery than 2020 and 2021.

I will even do something I haven’t done in nearly 16 years: eat a creamed pickled herring sandwich on rye at the stroke of midnight on New Year’s Eve.

Terrible Traditions: The Legend of the Creamed Pickled Herring Sandwich 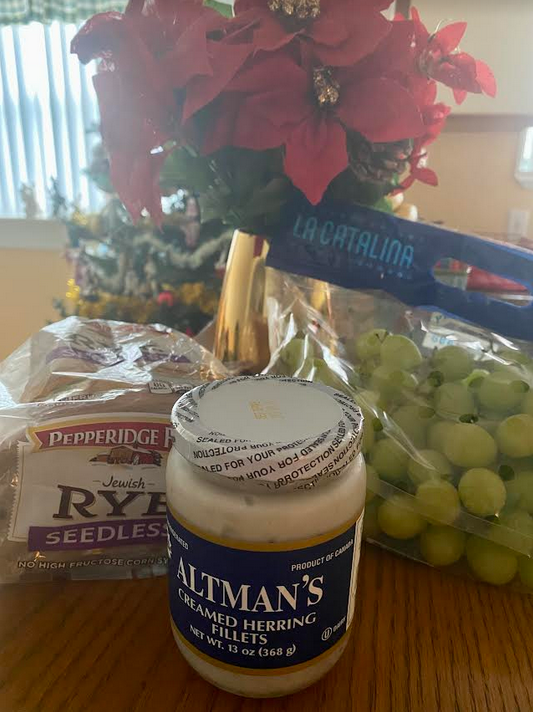 My half-assed attempt at making herring, rye bread, and a bag of green grapes look festive. Eat yer heart out, Martha Stewart! Mom would be proud!

Growing up, every New Year’s Eve, Mom would make a platter of treats to celebrate the flip of the calendar year. The snack tray was loaded with such delicacies as cheese, cold cuts, Planter’s mixed nuts, green grapes, and cordial cherries. (Get outta here with your runny Cella cherries! This is a creamy Queen Anne cordial cherries household, damnit!).

The centerpiece of this traditional spread was creamed-herring-and-rye-bread sandwiches.

Suffice to say no one was jazzed about them.

We’d gather around the TV, watching Dick Clark count down the seconds until the ball dropped. No sooner than we’d all exclaimed, “Happy New Year!”… It was on.

Mom would force everyone to take at least one bite out of the creamed-herring-and-rye-bread sandwiches for luck and shovel as many green grapes into our mouths — and they had to be green, “for money” — before the clock switched to 12:01am. We’d all look at one another — Dad, my brother and I — with hesitant glances before taking the compulsory bite of sandwich. Meanwhile, Mom chomped into hers with gusto.

Immediately afterward, we’d all frantically reach for the cordial cherries on the snack tray.

Don’t Forget to Pack Your Herring Sandwich In Your Purse!

Although Mom was unshakable in her devotion to the tradition, it was nothing compared to her own mother’s obsession with the New Year’s Eve herring sandwich. If you were not ringing in the new year under her roof, Grandma would demand you eat one wherever you were. Such was Grandma’s rabid fanaticism that, one year, she actually packed a herring sandwich in a baggie for Mom to carry in her purse to eat at midnight at a NYE party she was attending.

“You tossed it in the trash before you left for the party, right?,” I asked.

Mom looked at me aghast. “No! That would have been bad luck! I ate it at midnight.”

If I didn’t know my grandma better, I would have thought she was pulling the ultimate cock block on Mom without even being there at the party with her. Nothing screams “boner killer” like some dude going in for a New Year’s kiss when the cute blonde takes a herring sandwich out of her purse and crams it in her gob.

Not convinced that this wasn’t a ritualistic hazing hailing from the maternal side of my family, I did a bit of digging into the origins of herring sandwiches on New Year’s Eve. I’d heard plenty of folks attest to gobbling down green grapes for luck on New Year’s, but had never met anyone else subjected to herring sandwiches after the ball dropped.

As a kid, I’d accepted the concept of pickled herring on New Year’s Eve without any further explanation beyond, “You’ll eat that herring sandwich or else you’ll have bad luck all year!” However, the wonders of the internet had not yet existed. Now, decades later, I resolved to delve deeper into just where this terrible tradition had come from.

Upon doing a little digging, I’d learned that eating pickled herring at midnight is an Eastern European New Year’s tradition common throughout Poland, Scandinavia, and Germany. Given our family’s Slavic roots, I felt better knowing that this wasn’t just some crazy “back in St. Olaf” Rose Nylund-esque fever dream perpetuated by Mom and Grandma for decades.

Satisfied in the knowledge that this was a real thing —  and that there were others out there, chomping on pickled Poseidon-proffered pickings to the tune of “Auld Lang Syne” — I felt as if I’d solved an age-old mystery and that, perhaps, maybe there is some credence to the notion that consuming this mystical fish at midnight might yield blessings in the new year. 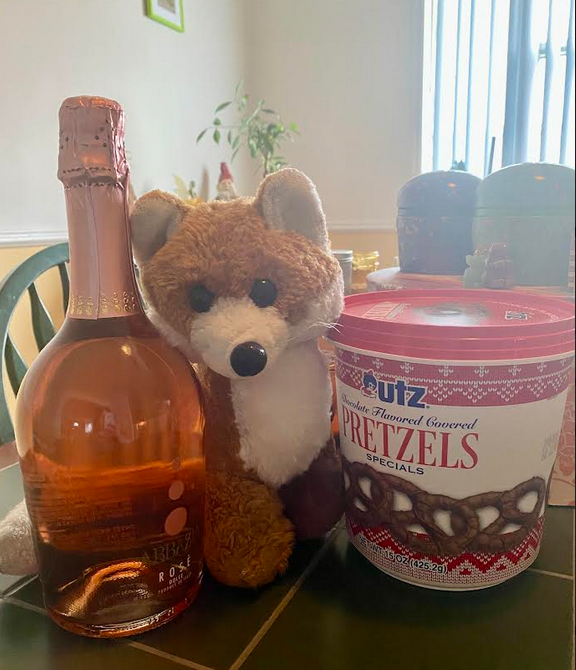 You didn’t think I was going in dry, did you? Sammy’s packin’ reinforcements with rose and chocolate pretzels for NYE!

Armed with the knowledge that this was an established practice for good luck — and maybe feeling a twinge of nostalgia — I decided that this would be the year to heed the clarion call of my ancestors and take a herring sandwich for the team. Oddly, I’m looking forward to it. In a twisted way, I’ve kinda been craving it. It’s been nearly two decades since I’ve piled one of these bad boys into my mouth. (Get your mind out of the gutter.)

As you get older, your tastes change. Perhaps my youthful palate wasn’t refined enough to enjoy the umami-by-way-of-caraway-and-cream combo? Who knows! Maybe I’ll eat the entire sandwich and go back for seconds!

Hey, I’m open to anything. However, as a precaution, I’ve still got a bottle of sparkling rosé at the ready, a snack tray filled with antipasti, raw veggies and dip, a good loaf of bread, and some chocolate covered pretzels. (Originally, I wanted to keep it old school and had a box of Queen Anne chocolate cherry cordials. However, lacking self-restraint, I’d already plowed through the entire box as a reward for making it through the holidays with the few marbles I have left intact.)

As I once did many years ago — like my mother and grandmother before me — I will eat that herring sandwich on New Year’s and then treat myself to some other delights.

Maybe you think it’s silly to put faith in superstitions. However, old traditions — even all-but-abandoned ones — can give you a sense of connection to loved ones both here and dearly departed. In a world that feels more divided and fractured than ever, connection brings comfort.

In hindsight, some of the things we don’t always want to do build character, resolve, and endurance. Not that every day should be filled with obligation. That’s just out-and-out drudgery; life is meant to be enjoyed. (Set boundaries, damnit!) However, sometimes, a herring sandwich can be a reminder that good things (like chocolate covered pretzels and wine) are just around the corner once you get past those hurdles.

At this point, I’m willing to put the lime in the coconut, leave some rum out for Jobu, and — by gum — chow down on a creamed pickled herring and rye bread sandwich in the hope that it brings all of us brighter days ahead. So, whether you’re superstitious or not, maybe you also want to try to bring some much-needed magic and good juju to the world in your own way to ring out the old and ring in the new.