With the weather getting nicer and being short on ideas, I thought I’d kick it back to the old days of reviewing fast food items — specifically, fast food items garnished with bacon. Having a hankering for something substantial-yet-salty, I decided to compare two take-away breakfast sandwiches comprised of bacon, egg, and cheese on a croissant: Dunkin’ Donuts’ Sweet Pepper Bacon Croissant and Wawa’s Bacon Egg & Cheese Croissant.

While dining indoors is still verboten, that doesn’t mean I can’t hoof it around the neighborhood for some prepared breakfast fare from chain franchises to enjoy from the confines of my couch.

I won’t launch into a lengthy exposition about my mile-long walk coming and going to procure my breakfast. (Do I fucking look like Anthony Bourdain?!) Instead, here are two reviews of two breakfast sandwiches from beloved East coast food franchises, written on separate days. (No, I didn’t slam two bacon-egg-and-cheese croissants down my gullet in one sitting. Thankyouverymuch.) Here’s how Dunkin’ and Wawa’s breakfast sandwiches stack up to one another.

In terms of presentation, Dunkin’s Sweet Pepper Bacon Croissant breakfast sandwich was well-wrapped in a white wax paper sleeve, emblazoned with cheerful hot pink and orange D’s, as per Dunkin’s branding. (I’m sure there’s a joke in there somewhere about not having seen that many D’s since the last time I looked in my lingerie drawer.) 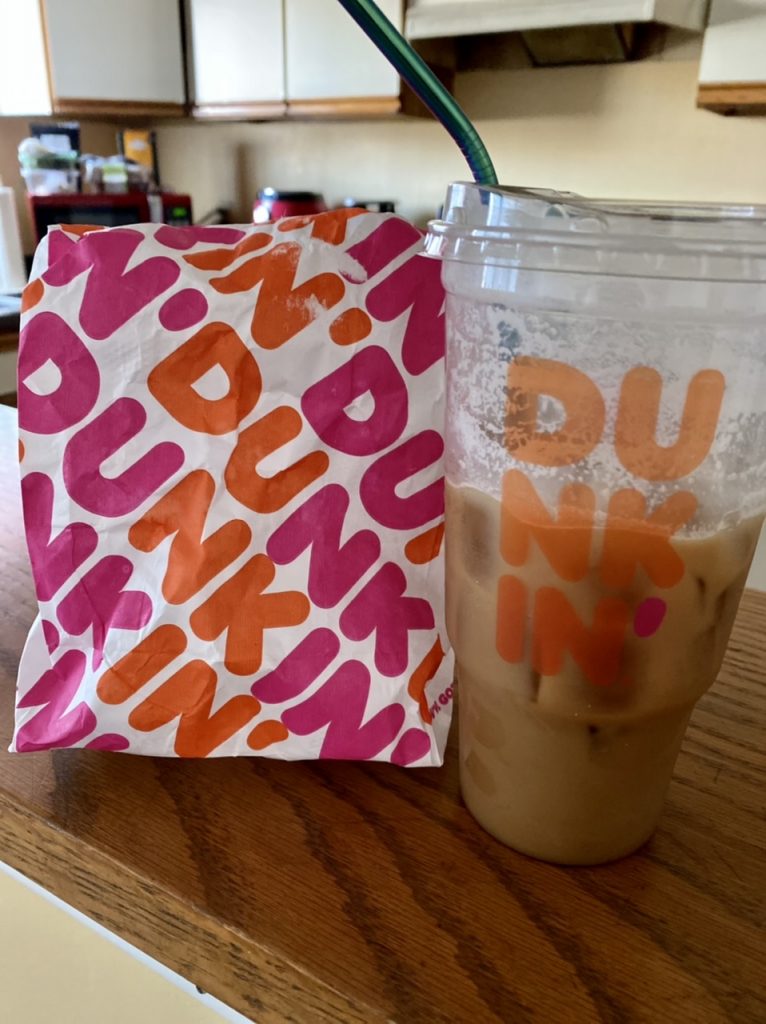 By the time I realized that I should probably take some photos to jazz up this blog post, I’d already eaten the sandwich and drank half of my Sweet Foam Cold Brew. So, here’s a photo of the empty Dunkin’ bag that I rustled out of my garbage can upon said realization along with my half-empty giant-sized cup of fancy iced coffee. Hey, I tried.

The sandwich itself was a little flatter than expected. When you have people slicing a croissant in half in order to ply it with toppings, it’s gonna get a little smooshed. Factor in that most of the promotional imagery you see for sandwiches are done with the assistance of “food fluffers,” and you should definitely temper your expectations.

Nevertheless, the sandwich didn’t slide apart on my half-mile walk home. So, it’s got that going for it. Its white cheddar cheese was only partially melted. I suppose that’s good in case you wanted to pick apart the sandwich and not lose cheese throughout the deconstruction process.  However, I personally prefer a nice, full melt.

Upon first bite, the bottom of the croissant wasn’t burnt, but had a bit of that “been in the oven too long” aftertaste. As far as croissants go, this was on the dry side and not as buttery as I hoped. The egg wasn’t a fluffy scrambled egg base, but rather a hard yolk in a field of fluffy egg white. It was good, but not the choice I might have made had I prepared the sandwich myself. But since my lazy ass wasn’t making the sandwich and someone else was doing it for me, I should shut my fucking gob and be grateful.

The cheese was definitely real cheddar. It had a pleasant sharpness too it, unlike processed American cheese that’s barely distinguishable from the plastic it’s wrapped in.

The real star of the show, however, is the sandwich’s namesake: the sweet pepper bacon. Dunkin’ layered the sandwich with four generous strips of this palatable pork product. It reminded me of the maple bacon my dad would fry up on Saturday mornings when I was a kid — a breakfast treat to be savored along with sliced strawberries in syrup and a bowl full of Rice Krispies with banana and spoonfuls of sugar while watching cartoons. In his infinite wisdom, Dad recognized that every kid needs to be hopped up on the high fructose good shit tempered with a bit of maple bacon while watching back-to-back episodes of The Smurfs to get that weekend started off right!

With my palate having undergone decades of refinement since then, I appreciated Dunkin’s stab at elevating their standard breakfast sandwich while still keeping it simple.

To wash it down, I picked up a large Dunkin’ Sweet Foam Chocolate Stout Cold Brew. The beverage had a nice cap of foam on top and some heft to it. Like throwing back a coffee-flavored Guinness. It was smooth, as a cold brew should be, but still had some of the traditional Dunkin’ bitterness to the brew. The faint hint of chocolate rounded this one out to make it a thoroughly enjoyable iced cup o’ Joe.

Overall, the Sweet Pepper Bacon Croissant had potential. The bacon was great, although I could likely eat it on its own. The cheddar was a nice addition. However, the preparation of the egg and the dry croissant with a slightly burnt aftertaste dragged this one down for me.

Since Wawa offers an assortment of breakfast sandwiches, I chose the Sizzli that most closely resembled the Dunkin’ Donuts offering I had the day before for a more accurate comparison. Wawa’s Bacon Egg & Cheese Croissant came neatly packaged in its own cardboard container. It even had its nutritional information (see below) printed on it so I knew exactly what I was in for. 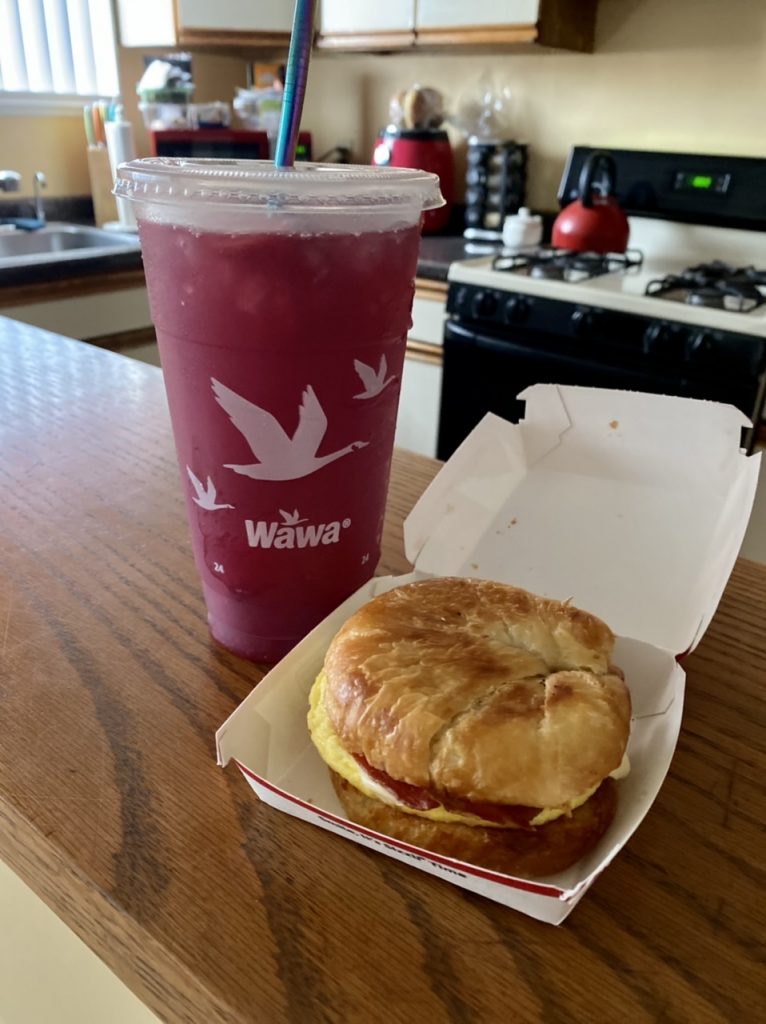 This time around, I had the foresight to snap a picture of my meal before digging in. During this inspection phase, I observed that the Sizzli survived the walk home. None of the components slid around, thanks to a slice of melted American cheese that kept it together.

This croissant was significantly fluffier. The light, fluffy disc of egg was the most prominent ingredient. While the egg had a nice texture, it could use a bit more seasoning. Hey, for the price and convenience, I’m not going to complain! However, next time I’ll hit it with a jolt of fresh black pepper to spice things up a bit.

The croissant itself was flaky, buttery, and everything a croissant should be. There was no bitterness of burnt offerings lurking near the bottom. That sucka melted in your mouth and served as a nice delivery mechanism for the bacon, egg, and cheese.

As for the bacon and cheese, they were pretty standard fare. The cheese? American. The bacon? Two salty, savory strips.

Like the egg, the bacon wasn’t packed with spice or flavor. However, it wasn’t fatty or loaded with gristle. Rather, it was a nice, meaty cut that held its own.

I opted for a cold beverage from Wawa to enjoy with my breakfast sandwich. (I also got a hot coffee to down later in the afternoon. But that’s my own caffeine problem to worry about.) On this go ’round, I chose a Strawberry Dragonfruit Refresher.  This icy treat featured caffeinated tea mixed with fresh fruit puree and juice. The addition of real strawberries to the drink made me feel like I’d made a relatively healthy choice, squeezing in some vitamin C and fresh fruit goodness to round out my breakfast.

Overall, Wawa’s bacon-egg-and-cheese croissant was well-balanced, if not a little bland. Nothing overpowering, but it was enjoyable, with no strange aftertaste or queasy feeling afterward

For a quick overview of the nutritional information of these sandwiches and how they compare — including how I felt after eating and how fast I had to poop after chowing down — read the tale of the tape below.

Price: $3.99
Calories: 650
Fat: 41 g
Protein: 23 g
Fiber: 1 g
Sodium: 850 mg
How did I feel afterward?: I had to pop a few TUMS afterwards. I felt full…. But not a good full. The sandwich lays pretty heavy.
How soon after eating & drinking did I poop?: 10 minutes
Overall: The Dunkin’ Sweet Pepper Bacon gives you a lot of sandwich for your dollar. It’s bigger than the Wawa Sizzli and comes packed with twice as much bacon and is quite flavorful. As for its downsides, the croissant had a slightly burnt taste to it and this bad boy left me with heartburn and queasiness within a few hours after eating.
Rating: C-

Price: Normal price: $2.99; At time of purchase: 2 for $4 (limited promotion)
Calories: 420
Fat: 28 g
Protein: 16 g
Fiber: 5 g
Sodium: 770 mg
How did I feel afterward?: The sandwich was satisfying and kept me full well-past breakfast and lunch without bogging me down.
How soon after eating & drinking did I poop?: 15 minutes
Overall: The Wawa Bacon Egg & Cheese Sizzli in its croissant incarnation was just the right size and a nice balance of flavors with no one ingredient overpowering the other. If you’re a fan of croissants, Wawa’s got you covered with flaky, buttery goodness. It’s a nice delivery mechanism for an otherwise bland, blank canvas of egg and cheese with bacon. Be prepared to hit it with some pepper or paprika to wring a little extra flavor out of it. Still, it’s satisfying without being too much sandwich to start the day with.
Rating: B-