Laying awake at 2am in the dark, my mind drifted to thoughts of the upcoming Spring holidays, Easter and Passover. Both involve a visitation by a mystical entity: the Easter Bunny and the Angel of Death. One brings delightful baskets of candy to good little boys and girls. The other brings, well, death — unless you’ve taken the precaution of smearing some lamb’s blood over your doorway.

Staring at the ceiling, I wondered what would happen if you combined the two: a wholesome woodland creature who isn’t so much of a death dealer, but an entity who metes out punishment to those who deserve it. And what about kids and people who can’t eat candy because they may be diabetic or just generally abstain from sugar? Where’s the Springtime fun and celebration for them?

Enter the Legend of Scattin’ Sam.

Scattin’ Sam is an adorable little fox. Unlike his next-door-neighbor, the Easter Bunny, Scattin’ Sam doesn’t hop down the bunny trail to deliver sweet treats to children who have been good all year. Instead, Scattin’ Sam waves his floofy tail and magically appears at your doorstep. He’s kind and empathetic to the fact that maybe you can’t eat candy and have probably been having a rough go of things. Scattin’ Sam wants nothing more than to cheer you up.

So, over a good cup of tea, Scattin’ Sam listens to your concerns and hears you out. He’s especially interested if there is a particular person who is vexing you — like a bully at school or work, a garbage cousin who comes over and breaks your toys, or even an ex-boyfriend or girlfriend.

Then, like a more benevolent Angel of Death, Scattin’ Sam waves his floofy tail yet again and shows up at the home of thine enemies when they’re either asleep, at school, at work, or at the grocery store.

And he takes a dump in their shoes.

Scattin’ Sam will shit in all the shoes of your enemies.

From the lowliest pair of Payless BOGO slides to their most expensive Louboutins.

Scattin’ Sam does not discriminate and will deposit hot, steaming turds in each of your enemy’s shoes.

Due to his magical nature and fiber-and-protein-rich diet, Scattin’ Sam is able to dump with righteous vengeance on your behalf. And why? Because Scattin’ Sam loves you.

Scattin’ Sam isn’t just full of poop. This fuzzy critter is also full of love. He recognizes that Spring is a time for new growth. And in order for that growth to happen, sometimes, it just needs a little bit of fertilizer.

What Happens After Scattin’ Sam Poops in the Shoes of Thine Enemies?

After Scattin’ Sam has defiled the shoes of your enemies, he wipes his fuzzy butt and his fuzzy paws. Then he magically reappears at your door. This time, he comes bearing a basket filled with sugar-free treats. Popcorn! Soft pretzels! Low-sodium potato chips (baked, not fried)! Beef, turkey, or plant-based jerky! Delicious seasonal fresh fruit! 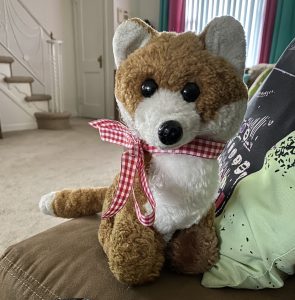 Scattin’ Sam appears on your couch, ready to share snacks with you and laugh at thine enemies.

Then, Scattin’ Sam takes out his magical crystal ball as you sit on the couch, enjoying  your tasty treats. He conjures the image of your enemy, arriving home after a hard day of being an asshole. They notice the house smells a little funky and check the bottom of their shoes to be sure they didn’t track in any dog doo from outside.

Peering into Scattin’ Sam’s magical crystal ball, you see your enemy shrug and take off their shoes. You and Scattin’ Sam sit in anticipation, shoveling buttery popcorn into your mouths as your enemy grabs their favorite pair of fuzzy slippers to unwind at the end of the day.

You watch as they slide their foot into the soft, furry confines of the footwear. You see a look of confusion and horror on their face as their toes make contact with a ripe, squishy turd. You and Scattin’ Sam cackle heartily as a look of disgust registers on the face of thine enemy as they feel a nugget of corn make its way between their toes.

Your enemy’s foot retreats from the slippers. They pick them up and sniff the shoe to confirm their worst suspicions before hurling the slipper across the room.

Frantically, your enemy runs to their bathroom, tracking doo-doo butter across the floors of their house. They sit on the edge of the tub, rinsing their feet furiously to try to rid them of the putrid odor of Scattin’ Sam’s refuse.

But It Ain’t Over Yet!

Sitting on the couch while snacking on sugar-free goodies, Scattin’ Sam leans over and tells you that the real fun is about to begin. You scratch the cuddly critter behind his ears and his tail wags with joy.

Peering into Scattin’ Sam’s magical crystal ball, you see your enemy heading toward their closet — where all their shoes live — trying to find another pair of bedroom slippers to wear around the house.

As they open the closet door, thine enemy is hit with a wall of stench. Your enemy reels backwards, recoiling in revulsion.

“Oh!” they cry, at a loss for words, choking on the terrible smell that has permeated the room.

You and Scattin’ Sam giggle as your enemy stumbles to their feet, trying to find the source of the odor.

Thine enemy pulls their shirt up over the lower half of their face, trying to find where the poopie smell is coming from. They pick up one shoe. Then another. Then another and another.

Every single shoe is filled with gobs of shit.

Runny Hershey squirts drip out of a boot when held upside down. A meaty turd thuds to the ground as it escapes from a loafer, leaving a stinky smear of brown in its wake.

Fecal matter covers the floor of thine enemy’s closet and bedroom, spattering on walls and the floor from where they hurled their shoes in frustration.

Exasperated, your enemy comes to the conclusion that all of their shoes are now micro-toilets and they can’t wear any of them. They are resigned to the fact that they must bag up all of their shoes in a garbage bag and dispose of them. As they stand up, their foot meets yet another gooey log and they’ve got a full-on mashee between their toes.

By this point, you and Scattin’ Sam are doubled over with laughter. You watch as your enemy bags up their shitty shoes, slip-sliding across the turd-strewn floor with tears streaming down their face.

One For the Road

Scattin’ Sam then turns his beady gaze on you. His eyes twinkle merrily: “And now, one for the road!”

Skiddly-deedly-doo-doo
Skriddly-driddly-poo-poo
Bring me one last pair of shoes
We’ll send them back, filled with poo!
You know what to do!
Skiddly-bee-bop shit pot!

Suddenly, the shoes your enemy was wearing when they walked back into their home appear before you and Scattin’ Sam. Following an afternoon of snacks and laughter, it’s now time to drop a deuce of your own in the shoe of your enemy before Scattin’ Sam sends the shoe back from whence it came.

Scattin’ Sam turns his head, giving you some privacy to grunt out a good one — fueled by jerky, pretzels, and fresh fruit. He shouts a few words of encouragement to give it all you got and turn that shoe into a Hot Pocket of righteous retribution. Scattin’ Sam then rolls some toilet paper your way for you to wipe and stash in the shoe itself when you’re done.

Satisfied with your work, Scattin’ Sam sends it back to your enemy’s house, just as they are wrapping up the last of their garbage bags and searching for a pair of shoes to walk those bags to the curb.

You and Scattin’ Sam sit with baited breath, ready for the coup de grace, to witness your enemy suffer one more act of humiliation.

They grab their shoes and unlace them, cramming a foot into the sneaker and feeling something warm squelch between their toes. Their pinky toe is buried in poop and they can feel warm dung seep beneath the nail of their big toe.

You watch as your enemy hurls themselves to the ground, crying and puking in abject defeat.

They don’t have even a single pair of shoes to wear to rid their home of this refuse or to go shopping for new shoes. Their mind swirls with thoughts of how they may have to explain not having a single shoe to wear to others. That, given the “No shoes, no shirt …. No dice!” mandate of many a store, they may not be permitted entry without even a modest pair of flip-flops at their disposal to leave the house.

Searching for a reason why every single one of their shoes was inexplicably shat in, your enemy sits in their shit-strewn house. Surrounded by garbage bags of caca-covered shoes, they ponder turning a new leaf.

Pleased with himself at bringing you good cheer and laying a fertile foundation for your enemy to see the error of their ways, Scattin’ Sam gives you a gentle hug and wishes you a happy year ahead. “May you always enjoy the fruits of Spring!” he says.

With a wave of his tail, Scattin’ Sam disappears, leaving you with a smile on your face and a song of Spring in your heart.

So, remember:  You never know what another person is going through, be it a medical diagnosis that prevents them from eating candy or just a rough year. Always be kind to others and act with integrity and good will. Because if you don’t, Scattin’ Sam just might pay you — and your shoes — a little visit.