These days, it’s tougher to find comedy that hits those notes. Today’s comedy either opts for complete shock value without putting laughter first, spins into overtly political humor, or plays it utterly and safe and boring. These trends and tropes make it that much harder to do something as simple as laugh.

However, a few shows and films get it right and are able to blend shocking “Oh, shit! Did they just say that!?” jokes, slyly subversive social commentary, take some risks by either embracing the avant garde  or the gloriously silly, and sometimes give you a warm-and-fuzzy case of The Feels.

Unbreakable Kimmy Schmidt was one of those shows. The Netflix series wrapped up its fourth and final season, having unleashed the second half of its final act on January 25, 2019. While the first half of the season was uneven, the second half was a welcome return to form.

The show’s final season saw Kimmy and her pals tackle more recent hot button issues like the #MeToo movement, white privilege, and true crime documentaries, as well as callbacks to ongoing story lines that focus on gentrification and post-traumatic stress disorder (PTSD). These episodes did so in a smart-yet-zany way that made serious social issues easier to understand without being preachy or self-righteous.

The show focuses on the title character — a sweet Midwestern girl who makes a run at life in New York City after she’s rescued from the underground bunker of the psychotic cult leader who kidnapped her.

Despite having endured rape, trauma, gaslighting, and emotional abuse while in the bunker, Kimmy (Ellie Kemper) retains her sense of self throughout the 15-year ordeal. Flashbacks peppered throughout the series show her as a chipper leader, boosting the spirits of the other three women who had been kidnapped by Reverend Richard Wayne Gary Wayne (Jon Hamm). Kimmy often took it upon herself to stand up to him and diffuse some of the abuse that could have potentially befallen the other women.

Kimmy winds up in New York by pure happenstance. Slated to appear on a NYC talk show with the other “mole women,” Kimmy makes the snap decision to  leave Indiana and her past behind and make a fresh start in The Big Apple.

She finds herself in one of the few parts of Brooklyn that hasn’t been gentrified and becomes roommates with flamboyantly gay aspiring actor Titus Andromedon (Titus Burgess) — himself a refugee from the Midwest who dreams of making it in the big city. She bonds with the kind-but-self-absorbed Titus who needs a roommate and subsequently finds a whacky mother figure in their eccentric landlady, Lillian Kaushstupper (Carol Kane), whose hobbies include meddling, ogling men, dabbling in drug dealing (just a little!) and fighting gentrification.

Kimmy also bonds with her first employer, trophy wife Jacqueline White-Voorhees (Jane Krakowski) — who is even more self-absorbed than Titus and who hires Kimmy to play nanny to her son and stepdaughter.

This trio becomes Kimmy’s unlikely support system as she navigates New York City and attempts to live a “normal” life. Although Kimmy is somewhat naive and childlike, she’s far from stupid. As the show progresses, her confidence grows and the viewer goes on a journey with Kimmy and her friends-that-become-family as they help reacquaint her with the ways of the world.

A Lighthearted Approach to PTSD

As Kimmy tries to lead a normal life and readapt to the changed world around her, her PTSD rears its head at inopportune times: at restaurants when someone yells “surprise,” while dating a veteran who also suffers from the disorder, and in having to testify at the trial of The Reverend and the trial’s ensuing media blitz.

Unbreakable Kimmy Schmidt handles the issue in a surprisingly lighthearted way that doesn’t make light of the condition. PTSD is never used as either a joke or a punchline in the show. Instead, Kimmy shines a light on the fact that nearly anything can become a trigger and that, in many cases, those affected don’t always want to talk about it — at least in a direct manner.

While Kimmy touches on the title character’s PTSD as a recurring theme, it’s by no means a primary focus of the show. Rather, it pops up every so often as part of a storyline. Just like how real people deal with PTSD: It’s not who they are, but it’s just something they deal with on a recurring (albeit regular) basis.

While much of Kimmy’s life as a “mole woman” who survived the bunker colors who she is as a person, it’s by no means her defining trait. Her own strength of character and kindness define her, despite having spent years in captivity.

In one of the show’s Season 4 episodes titled “Sliding Van Doors” (a homage to the 1998 Gwyneth Paltrow cheeseball vehicle, Sliding Doors), Unbreakable Kimmy Schmidt conjures a 53-minute “what if” alternate universe where Kimmy never got into The Reverend’s van. It’s an oddly bleak scenario that has Kimmy, Titus, Jacqueline, Mikey (Titus’s boyfriend / ex-boyfriend), and Lillian living their worst lives.

Near the end of the episode, Titus asks Kimmy if she ever wonders how her life might have been different if she’d never gotten in the van?

Her immediate response (and Ellie Kemper’s performance) conveys the feelings individuals who deal with deep trauma struggle with:

No. There’s no point. I’ve been through a lot of terrible stuff that I wish had never happened. But I still have to believe that this is where I’m meant to be. Because if I didn’t, I’d go crazy.

It’s good advice for anyone: Dwelling on the past can make you crazy — especially if your past itself was pretty nuts. What matters is that you survived. You’re here. And that what you do next with your life has meaning. 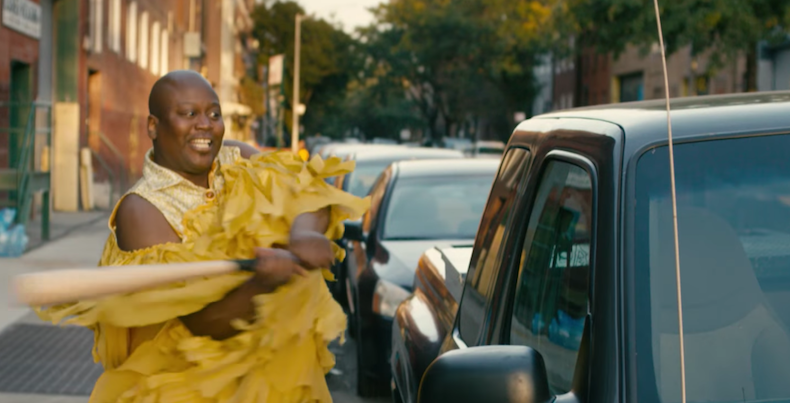 The show’s recurring theme is making lemons into lemonade — not to be confused with “Lemonade-ing” as a verb. (Thank you, Titus.) In true Kimmy fashion, she doesn’t use her experiences to write a sad, sordid, serious “tell-all” book about her time in the bunker. Rather, she leverages her imagination and her past to write a children’s book that teaches young boys about the importance of being kind to girls and becoming good men.

While Kimmy doesn’t talk about her past in a direct way, it’s acknowledged that the characters in the book are based on people from her own life: her absentee roller-coaster riding mother, The Reverend, Titus, Jaqueline, and others. She takes the sad parts of her past and transforms them into something colorful and fun that can help people. While it’s probably a creative catharsis, Kimmy takes joy in knowing she can play a role in making sure what happened to her doesn’t happen to others.

Avoiding spoilers, the final words of the series are spoken by a young boy who gives his favorite author a hug as he tells her, Kimmy’s books “make me feel safe.”

While this feels like a riff on J.K. Rowling’s Harry Potter series, the spirit remains the same: people who have endured suffering aren’t defined by their pain. They use their inner strength and who they are at their core to overcome and do good things.

The Importance of Being Earnest (in Comedy)

In a world where bad things happen every day, it sure was nice to have Kimmy Schmidt and her friends offer an optimistic look at life (and occasional musical numbers) during their four-season run. While the show is over, there’s still plenty of room for new comedies to broach sensitive social issues and get us thinking — and talking — about the struggles of everyday people.

As a genre, comedy  has the potential to be a lot more human than drama. While no one likes to be preached at, everyone likes to laugh. Laughter can diffuse tense situations. And sometimes, finding humor in the things that scare you or make you uncomfortable makes them feel a little less overwhelming. Does humor solve problems and make them disappear like magic? No. But it lessens the intimidation factor and allows us to find common ground to begin talking about things. By being able to find the funny in even the worst situations, it opens the door to communication, opens the eyes of others to new perspectives, and opens humans to healing.