It’s a novel idea, but Hallmark should really consider a line of greeting cards devoted to the impending apocalypse. No one knows how it will happen or when it will hit, but the apocalypse is an experience that is both deeply personal and something shared with others.

While you might not find “Apocalypse Greetings” nestled between “For a Special Nephew” or “Congratulations!” cards at your local Walgreen’s or Rite Aid, but you can find several other creative end-of-the-world musings from the minds of 32 authors in the anthology, Enter the Apocalypse, edited by Tom Gondolfi. I’m honored to have had my story, “Death, Inc.”, included alongside other warped tales from some extremely talented writers. (And I’m not blowing smoke up anyone’s ass! These folks are the genuine article!)

One such tale is Katrina Nicholson’s complex, character-driven account of the end of days by way of bioterrorism. She contributed the following guest post, musing on the multiple avenues the apocalypse can take by circling back to a favorite childhood reading staple: Choose Your Own Adventure! Katrina totally gets the idea of the apocalypse being something very personal … and finds the fun in it, too!

Katrina Nicholson has a degree in history, a diploma in writing for film and television, and a horrifying obsession with infectious diseases. Her story for Enter the Apocalypse is called “Nightmare Factory.” She lives in Nova Scotia, but you can visit her online at www.katrinanicholson.com.

Robert MacLeod, his wide, staring eyes filled with red blood, lay on his back in the entryway where he’d died. Sheets of mottled purple-black skin had sloughed off into the congealing pools of tar-like blood on the stone floor.

Choose Your Own Apocalypse

If books, TV, movies, and the short stories from Enter the Apocalypse are to be believed, the world is constantly hovering on the brink of disaster. But how will it all come about? How do we want it to come about? I mean, there are so many options: nuclear war, pandemic, alien invasion, asteroid impacts… how will we ever choose? Have no fear. This handy guide will help you narrow down your options.

It starts with a careless slip by a bioweapons scientist. Or maybe a hapless villager gets bitten by a bat. Or perhaps a disease-riddled corpse melts out of the permafrost. Whatever the trigger, the result is the same. No resistance, no vaccine, no cure.
PRO: Someone always turns out to be immune. Maybe it will be me!
CON: Have to watch a lot of people’s faces melt off. Gross.

A computer glitch. An insane dictator gets his/her hands on the launch codes. Somebody calls somebody else’s bluff in the great game of Mutually Assured Destruction. However it happens, craters and mushroom clouds abound!

PRO:Preppers finally get to use those bunkers they dug in their backyards.
CON:Free cancer. No pushing – there’s plenty to go around.

You’re walking past the graveyard one day and… uh oh… is that a hand? That’s definitely a hand. And a head. Lots of them. Oh crap. Time to lock yourself in the mall with a bunch of strangers who have conveniently conflicting personalities.
PRO:Most of us have seen the movie. WE GOT THIS.
CON:Elderly relatives constantly turning into bad guys behind your back.

Previously only seen by drunk farmers, aliens decide to increase their name recognition with a giant saucer and some laser weapons. Say goodbye to your home planet and hello to the new hyperspace bypass.
PRO:Look guys, we’re not alone in the universe!
CON:Only a handful of astronauts survive, and I’m not an astronaut.

Look up. Waaaay up. See that bright spot? That’s not a star. That’s an asteroid. It’s coming this way, and there’s nothing you can do about it! Do you wish you hadn’t looked up after all?
PRO:Dust cloud takes care of global warming problem.
CON:Your bones admired 65 million years later by mole-descended schoolchildren on museum field trip.

KABLOOEY! Without warning the top of a mountain suddenly detonates in a nuclear-sized shower of lava and rocks that smites the surrounding area like the hand of god. Ash and dust block the sun for years.
PRO:Cool fireworks.
CON:Your choices are burn now or freeze later.

Genetically engineered malaria-immune supermosquitoes somehow pass on genetic alterations when eaten. Every species on the planet becomes a half-mutant of their primary food source.
PRO: ’80s children pleasantly reminded of The Wuzzles cartoon.
CON:Life as a pineapple/human hybrid is not nearly as fun as trendy home décor would have you believe.

Artificial Intelligence is meant to usher in a new era of laziness for humans. We connect it to the internet. Rookie mistake. ALL HAIL GOOGLEOR.
PRO:It might be nice to have no responsibilities.
CON:My slow-ass computer probably remembers all the stuff I’ve screamed at it over the years. 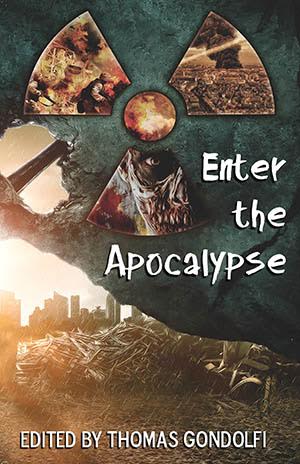 So, there you have it. Submit your votes by buying a copy of the anthology and having nightmares about your favorite story. Happy mass extinction!

To check out more from the minds behind Enter the Apocalypse, visit Tanstaafl Press on Facebook for updates on upcoming releases and more from emerging authors.