I have a love / hate relationship with SEPTA. Anyone who knows me can attest to my feelings, owing to my near-daily Facebook posts documenting my commute to and from work on a regular basis, or in-person rants.

I love SEPTA for its convenience (most times) and potential for people watching (all the time). I hate it for its unpredictability (sometimes), myriad smells and collection of rude patrons (off-and-on), and for those times every few years when transportation is suspended due to a strike. Yet, if you’re one of the thousands who take SEPTA daily, you come to accept — or even chuckle at — these things the same way you do that relative who passes gas at the Thanksgiving dinner table before asking you when you’re getting married.

One of many Facebook posts recounting my daily SEPTA commutes.

Philly has been my adopted hometown for over 20 years. During that time, I’ve become a grizzled young vet of the city’s public transportation system and am well-acquainted with what’s good and bad about it. Yet, an article published this week on Philly.com titled “I Rode the El from End to End for the First Time” completely overlooked nearly everything a person could glean from an authentic SEPTA-riding experience, even if seen through the eyes of a total n00b.

The premise of the article is simple: the author — a man with three kids, a dog, and a job as a writer for a city publication — chronicles what it’s like to get on SEPTA’s Market-Frankford Blue Line and ride it from end to end. It’s loaded with flowery language that smacks of a desperate attempt at sounding like Jack Kerouac-by-way-of-Thoreau. More attention was paid to sights outside the window, noting which parts of the line pass through areas heavy with (gasp!) graffiti as opposed to those that have been lovingly gentrified with murals and trees. It focuses more on floofy prose than capturing a feel for what it’s really like to ride public transportation. The writer approached his article and the trip itself with an “Ooh! How quaint!” novelty of someone just passing through, doing more to accentuate a division of class within the city than acknowledge our common ground.

SEPTA: Finding the Fun and Common Ground on the City’s Blue Line

Riding SEPTA every day, you see the best and worst of humanity. I liken it to my very first job, flipping burgers for a fast food chain at the age of 16. While I served hard time behind the broiler at Burger King, I worked alongside many different types of people:

While the lifers of Group 2 had a lot more at stake than any of my other coworkers, it was the teens and seniors at different ends of the life experience spectrum that found they had a lot more in common than first glances would indicate. For both groups, the job was disposable; the teens had an entire lifetime ahead of them and the seniors were approaching the end of their lives. There’s a certain sense of zero fucks given when you don’t have much to lose. Moreover, the teens and seniors bonded in mutual loathing of management and shared quite a few laughs at their expense. (Again… Because “zero fucks given.”)

And that’s what it’s like to ride SEPTA. At any given moment, you’ve got people from all walks of life sharing the same space and riding next to each other. You’ve got students heading to school, people spanning the age range from Millennials to Baby Boomers commuting to their jobs, older folks running errands or heading to doctor appointments.

You also encounter some of the worst people the city has to offer (culled from my rants on Facebook): 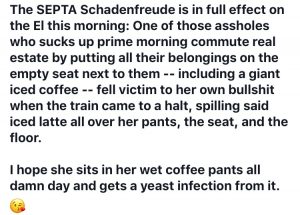 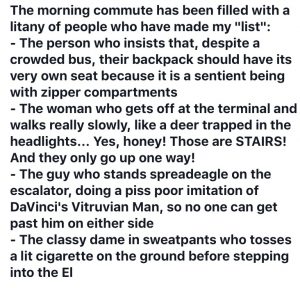 Yes, these are the people who shrug off the written and unwritten code of public transportation etiquette. In addition to SEPTA’s “Dude It’s Rude” ad campaign, which involves posters on buses and trains serving as a makeshift Miss Manners for riders, there is an unspoken code among patrons: 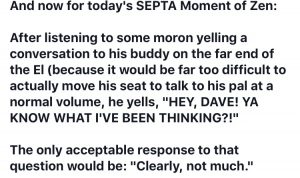 In addition to all-around rude folks, there are the panhandlers, drunks, and derelicts who wobble onto the El at any given moment to liven things up. Shortly after the 1st and 15th of every month, you’ll see the “nodders” and the “dippers” who have just squandered most of their paycheck getting high and falling asleep on some hapless patron’s shoulder or defying gravity contorted in a bizarre half-sitting / half-standing position in the middle of the car.

There are also the panhandling regulars on the El. Some are truly down-on-their-luck while others wear brand new sneakers and carry fresh-looking Jansport backpacks that betray their status as in need of a helping hand.

While these aren’t the bulk of SEPTA riders, they’re a good reason why many patrons choose to avoid eye contact or pretend to listen to their headphones, bobbing their head in time with non-existent music so they can appear occupied while staying aware of their surroundings.

Yes, Virginia. There Really Are Nice People on SEPTA.

On the flipside, you also see a lot of what’s good about Philadelphia on SEPTA. You’ll see small, yet meaningful acts of kindness in the form of riders who will hold the doors for people running to get on the El before they slam shut. Or you’ll see shades of altruism in those folks whose long day is worn plainly on their faces, yet give up their seat for an older or disabled person.

You don’t always have to say more to these souls than “thank you.” They recognize one of their own, whether that person is wearing a hoodie or carrying a briefcase. If you ride SEPTA on the regular, you know what it’s like to wait for a train or to want to get home and relax after a long day. That long day may be different or longer for each person, but it’s a long day nonetheless.

And let’s not forget the entrepreneurs of SEPTA, those hardy few trying to make an honest buck or get a little notoriety:

As for the latter group, I’ve seen some really talented individuals pass through the El. It’s not all bad. Sometimes, it’s a pleasant surprise to hear a damn good a cappella version of Gnarls Barkley’s “Crazy” when you’re heading home:

If you take a certain route often enough, you get familiar with the drivers, many of whom are genuinely nice people. (There are a few douche canoes, but I suppose I’d be a bit ornery too if I had to put up with what they do for 40+ hours every week.)

By the same (SEPTA) token, you see familiar faces every day. At some point, you might even strike up a conversation with some of your fellow riders and even become bus buddies. That’s not always the case, but it’s still comforting to know they’re there, going about their daily routine on the El, the same as you.

There’s an unspoken code among SEPTA riders: “We’re all in this together. May as well make the best of it.” Doesn’t matter if you get off the El at Bridge & Pratt in the Northeast or at 69th Street in Upper Darby. Everyone’s just trying to live and get someplace.

There’s a lot to love about this city. There’s also a lot to complain about in this city, too. (Philadelphians love to complain. Really. We do. We talk shit about our sports teams and we love to bitch about politics, corruption, cheeseteaks, and anything else you can think of.) Yet, that’s what makes SEPTA and the El such an intrinsic part of Philly: SEPTA gives you the means to get to all of the different parts of the city and see not just buildings and eateries and shopping centers — but the people who make this city what it is, for better or worse. And therein lies its charm.