Let’s cut to the chase: Suicide Squad was not bad at all.  After enduring the cinematic abortion known as Batman vs. Superman, I went into the theatre with a healthy dose of skepticism, prepared to see some of my favorite characters get shafted. I came out of the theatre pleasantly surprised.

Not without its flaws, Suicide Squad was entertaining, fun, and remained true to its characters — the way a summer blockbuster comic book movie should be.

Suicide Squad‘s strong suit was its casting. If you’re a fan of the comics and know and love these characters, you’ll likely be pleased with who they chose to play them. However, the plot was choppy and didn’t flow as well as it should have given how spot-on the characters felt. 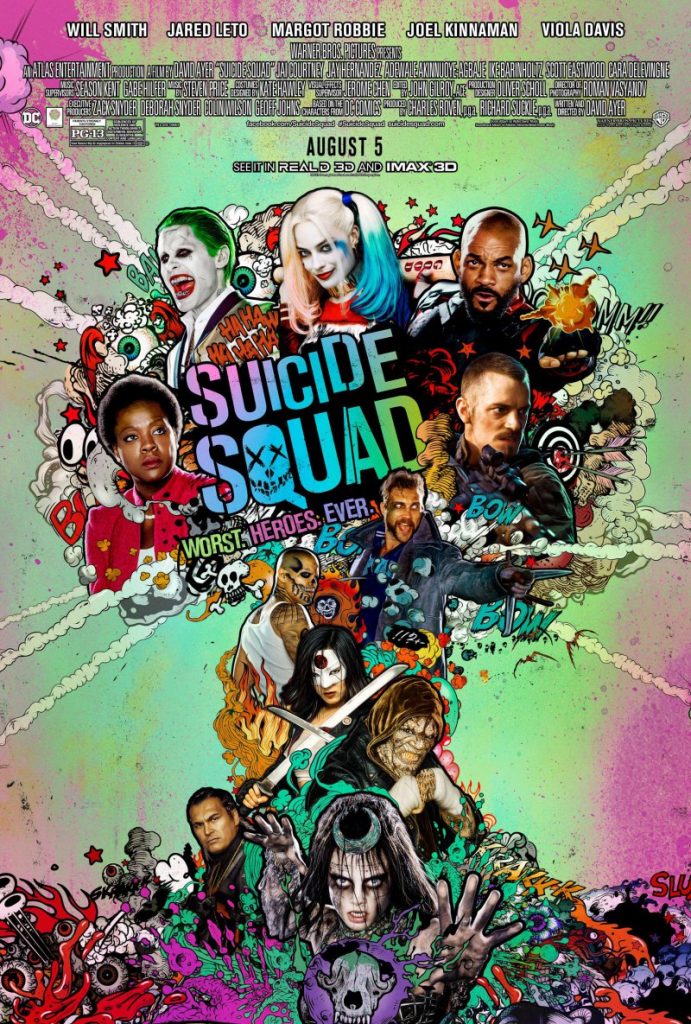 If you thought C.C.H. Pounder should have been Amanda Waller, you’ll eat your words when Viola Davis is onscreen as the ruthless mastermind behind the Suicide Squad. She’s calm and collected throughout, but even at her most relaxed — enjoying a five-star business meal while her tablemates sweat it out — you know she’s capable of icing everyone in the room.

Will Smith is solid as Deadshot and makes the assassin-for-hire a very human character. Deadshot loves his daughter and hates Ben Affleck’s Batman almost as much as a lot of comic book fans do (high five!), which gives him redemption points out the wazoo, as far as I’m concerned. Deadshot is clearly the “leader” of the Suicide Squad — the voice of reason and not without a sense of ethics and love for his daughter, despite his dubious career choice.

The clear standout is Margot Robbie as Harley Quinn. She steals every scene she’s in, and if you’re one of those disturbed little girls who wanted to be Harley Quinn when she grew up (*raises hand*), she’s everything you’d hoped a living, breathing, silver screen version of The Joker’s moll would be. Robbie plays her as a mix of childlike and saucy, bonkers with flickers of sanity — with clear motivations throughout. Her New Yawk accent, baseball bat, and mallet make her feel like Paul Dini’s cartoon creation magically came to life.

Yet, not all of the characters get as robust and humanizing a backstory as others. Jay Hernandez does a good job emoting as the tortured Diablo under a ton of makeup and has the most tragic tale of the Suicide Squad lot. And while Adewale Akinnuoye-Agbaje‘s Killer Croc and Jai Courtney’s Capatain Boomerang are entertaining characters, they don’t get much of a humanizing backstory apart from a fondness for BET and pink unicorns, respectively.

And this is where Suicide Squad takes a hard turn. The plot is fragmented and doesn’t do all of its characters justice. You get bits of backstory. You get the gist that this crackerjack team of incarcerated villains have been brought together to defend Gotham against metahumans in exchange for time knocked off their sentences. But you don’t get much more than that. Harley Quinn is an intriguing character, but you don’t see exactly what turned a smart psychologist into The Joker’s very own lethal Galatea gone off her Gabitril. Her motivations for freedom are clear (to get back with her Puddin’), but little is know what’s waiting for Boomerang or Diablo once they get out of the high-security hoosegow.

The one bit of casting that flops harder than Tommen Baratheon out an open window is Cara Delevingne as Enchantress. As a 6,000-year-old witch who inhabits the body of archaeologist June Moone, Enchantress should feel a bit more formidable than she comes across. There isn’t much to the role of Dr. June Moone, who, as the paramour of Joel Kinnaman’s Rick Flag, is more of a plot device than fleshed-out character. There’s nothing really remarkable about her (which has more to do with how she’s written than the fault of the actress) to make you see why Flag is so willing to risk his life to save her.

While the writing can be blamed for the lack of depth to June Moone, it’s Delvingne’s underdeveloped acting chops that make Enchantress a terrible villain. She’s twitchy and spastic, gyrating like a novice stripper at an Inhibited Dance Party. After the character goes full-blown evil after resurrecting her brother — a character listed only as “The Incubus,” Delevingne lipsynchs her dialogue to a modulated recording that’s three octaves deeper. This special effect is not very special and takes viewers out of the moment.

Worse yet, you get zero backstory about Enchantress and her brother apart from they used to be gods and that they want to destroy the world. And even then, they don’t feel like a threat.

But what about the greatest villain of all? The Joker? Well….

Brace Yourself: The Joker Gets 5 Minutes of Screen Time

For all the press, late night talk show appearances, and clips of Jared Leto as The Joker used to promote Suicide Squad, fans see him onscreen for a total of five minutes. Okay, okay. Maybe 15 minutes of cumulative screen time.

“You mean I’m only in it for five minutes?”

It’s that lack of screen time that makes it hard to tell how good Leto’s interpretation of The Joker really is. On the spectrum of film versions of The Joker, Leto’s leans more towards Jack Nicholson’s kooky crime kingpin than Heath Ledger’s unbalanced anarchist. Leto dials the psychopath factor way up and — green hair, white skin, and facial tattoos notwithstanding — you immediately know the boy’s not playing with a full deck. (Pardon the pun.) Nicholson’s Joker may have been able to play it straight when he had to, but Leto’s Clown Prince of Crime is turnt up all the time.

His relationship with Harley Quinn is an interesting one and fairly true to the comics. It’s a mixture of sweetness and Stockholm Syndrome with Joker leaving Harley for dead in some situations, yet battling desperately to get her back in others. The duo have good chemistry when they actually do share the screen, but that screen time is limited.

If you were looking to praise or pan Jared Leto’s performance, you really won’t have too much to go on, unless he has a bigger role in the rumored Harley Quinn solo flick.

Letting the Music Do the Talking

Suicide Squad made good use of music to introduce characters and heighten the action. While some critics took issue with the soundtrack choices being too literal, I appreciated that DC tore a page out of the Guardians of the Galaxy handbook and added familiar songs to give viewers added insight.

Amanda Waller’s theme is the Rolling Stones’ Sympathy for the Devil, heralding that these “bad guys” are going to make a Faustian pact with her any minute now. Eminem’s “Without Me” provides the backdrop for the Suicide Squad suiting up. And the classic, “You Don’t Own Me,” plays in the background when we’re first introduced to Harley Quinn in her cell.

When you’re pressed for time and can’t fit detailed origin stories into a film without turning it into a 3-hour epic, sometimes you need to rely on recognizable song choices to speed up the characterization process. Not every movie benefits from an original score or needs to use tepid indie rock suited for the closing moments of a CW teen drama to play in the background. Get out of here with that shit.

The Verdict for Suicide Squad?

Overall, Suicide Squad deserves a solid B-minus — far more enjoyable than Batman vs. Superman. It’s a fun film that was made with comic book fans in mind. Marvel still handles humor in its films better than DC has to-date, but considering Suicide Squad was DC’s first stab at more lighthearted fare, I’ll cut them some slack.

The casting and characterization is very good, but the film suffers from scattered plot and villains who aren’t particularly threatening. I wouldn’t be mad at DC if they did spin-off films for a lot of the characters or if they popped up in future installments. Like the Suicide Squad themselves, DC had some redemption to do and managed to pull it off to some degree.