There is no Game of Thrones character more reviled than Ramsay Bolton — the mad dog formerly known as Ramsay Snow, legitimized bastard son of all-around duplicitous douche Roose Bolton. Rivaled in fan hatred by only Joffrey Baratheon, Ramsay has made Joffrey look like a rank amateur in terms of acts of cruelty.

On Game of Thrones and in George R.R. Martin’s A Song of Ice and Fire series, fan favorite characters are usually put through the ringer — but let’s face it, that adversity makes them all the more interesting. And if anyone has put more characters through the ringer in such a short time (besides the saga’s author himself), it’s Ramsay Bolton. From castration to rape to creative ways to welcome a new baby brother, Ramsay has the market cornered on tormenting others.

Given how good, noble characters die horrifying deaths, it’s time to grease the wheels of justice and show just how much Game of Thrones fans deeply treasure Ramsay Bolton. You know, because we wouldn’t want anything bad to happen to that heartwarming little scamp, right? So, here goes nothing.

You just might be the most precious thing in all of Westeros. You’re always thinking of others. Like that time when Theon Greyjoy was really sad about his poor life decisions, you helped him get over that by giving him a cute new nickname (Reek) and a new purpose (serving you). And when you chopped off his weiner, you did him a huge favor. I mean, Theon was squandering his potential with all that womanizing. You did him a solid by helping him remove that distraction and refocus his energies. So awesome!

We all know how much you cared about your equally spunky companion, Myranda. So, it must have been a real blow when you had to take one for the team and marry Sansa to lay claim as Warden of the North. I’m a big believer in true love and that one had to sting. But even though you really weren’t into Sansa, that was so sweet of you to have Theon/Reek apologize to her for killing (or thinking he killed) her two little brothers. Again, Ramsay: You’re always thinking of others.

And you’re even thinking of others when you’re NOT thinking of others. Like when you shanked your dad after he found out he’d just become a proud papa again, and then when you offed your stepmom and baby brother? You were actually an instrument of Karma. Think about it: Your dad (Roose Bolton) teamed up with your stepmom’s pappy (Walder Frey) to kill off Rob Stark, his wife and their unborn child, AND Rob’s mother Catlyn. When you shivved Daddy Bolton, you actually completed a karmic circle by taking out the man who orchestrated the Starks’ deaths, and taking out his wife and infant son — which evens the score for Rob’s wife and child. Gosh, Ramsay! Could you be more perfect without even trying?! 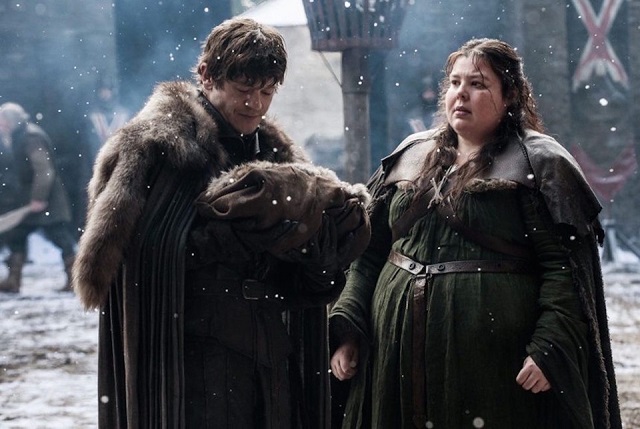 But, sweet Snow Bunny, the thing that is most endearing about you is your love of animals. Especially your beloved pet pooches that you’re always playing with in the kennels. It was adorable how you and Myranda used to romp and play with them, taking them on fun hunting expeditions and playing “Hide and Seek” with random peasants. And when poor, sweet Myranda died? Despite your obviously broken heart, the first thing you thought of was making sure your dear doggies had some fresh chow to snack on. So thoughtful AND eco-conscious! Waste not, want not, amirite? Ditto for giving them some variance in their diet with Stepmommy Dearest Fat Walda and your little brother. You always make sure they have healthy lean fare, so I’m positive it was a tasty treat for them to have something a little more meaty and tender. Ramsay, you are positively a shoo-in for PETA’s Man of the Year!

People may say you’re a bastard, Ramsay, but I just won’t hear of it. You’re just a fun-loving little snow bunny with adorably pinchable cheeks and an impish smile — especially when you’re flaying others alive. You’re a full-on mensch and the most lovable lad in all of Westeros. Here’s hoping you’re around for many, many more seasons to come to delight us all with your whacky hijinx!

I’m calling it now: If he bites it by the end of this season, I’ll have considered this love letter to Ramsay Bolton as having done my part. Thank me later.