Philadelphia has its share of colorful characters who have a penchant for disturbing, yet hilarious antics. We can proudly lay claim to being the home of the Swiss Cheese Pervert and now we can look to nearby Bryn Mawr for our latest noteworthy miscreant: the guy who took a dump in his local library.  According to a cadre of librarians from around the country quoted by Philly.com, the log-leaving Ludington Library patron wasn’t the first to drop a deuce among the stacks — and he likely won’t be the last.

Having worked in a library for four years, I can attest to this. Actually, poop was one of the tamer things I’d encountered during my tenure as a Stacks Assistant (i.e., someone who puts the books back where they belong, tracks down mis-shelved tomes, and helps patrons find what they’re looking for).

Make no mistake about it, I loved working in a library. To this day, I can expound upon the merits of why the Library of Congress method of cataloging is far superior to that of the Dewey Decimal System. And yes, many of those Library of Congress codes have burned themselves into my brain thanks to the large amounts of time I spent snickering at books on human sexuality in the HQ portion of the stacks, or all those times I sat my ass down on the floor of the PN section reading far too much about films and television when I should have been re-shelving books. (I’d like to take this time to apologize to my supervisor, one of the best bosses I ever had the privilege of working for. Sorry, dude!)

Libraries usually conjure images of withered spinsters shushing rowdy patrons who raise their voices above a whisper. Personally, I’d never seen that happen. But what I did see a lot of were patrons who would scatter their books across a table along with a veritable buffet. We’re not talking snacks and shit like a bag of trail mix. No. We’re talkin’ greasy fare like cheesesteaks and cartons of Lo Mein.

Depending on the day, the sloppiness of the snack, and how mad with power I may have been within the meager rights my position afforded me, I would confront the patron. Sometimes (like Tina Turner on “Proud Mary”), I’d do it nice… and eaaaasy, politely asking the patron to put their food away. Other times… I’d do it (pause for Tina-like effect)… rough. All that depended on a.) how greasy the food was and the potential it had to besmirch books from the collection, b.) how loud this fucker was chewing and disturbing the Simon & Garfunkel-esque sounds of silence and c.) how hungry / hangry I was at that moment. 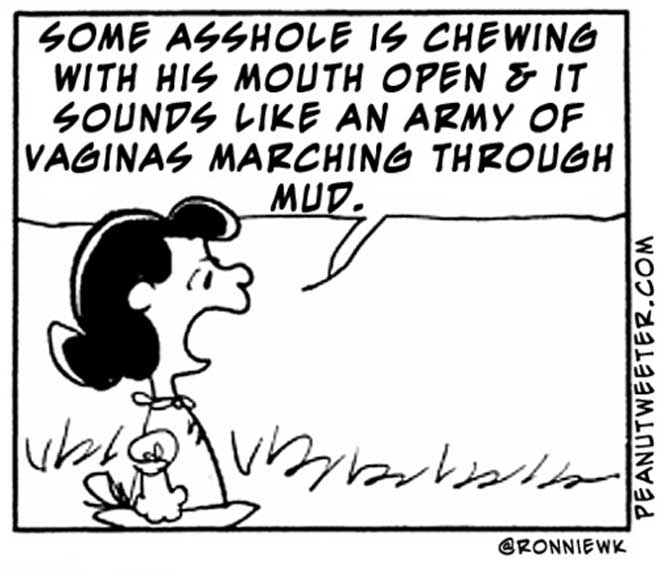 Getting to shame patrons for eating in the library — or finding someone else who had the authority to actually throw them out — was always a treat.

If you worked at a university library during Finals Week, it was guaranteed you would see your share of weirdness — chief of which were Adderall-addled co-eds cramming for tests. These students would camp out in the library with various books, blankets, and edibles. (Finals Week was one of the few times where food in the library was overlooked and patrons got a free pass.) 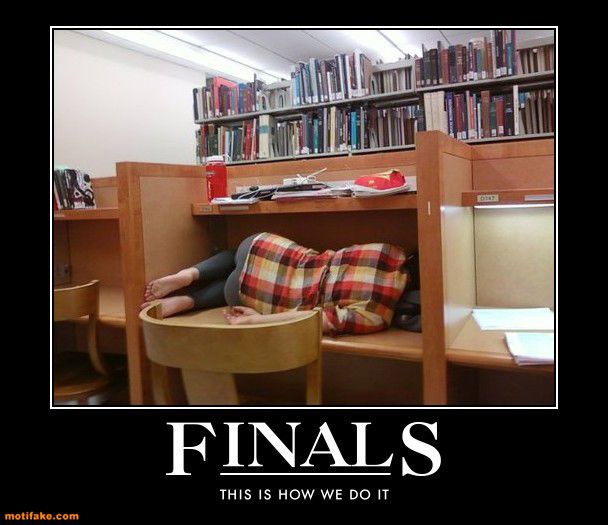 During Finals Week, if you had an early shift at the library, it wasn’t surprising to find students curled up on top of a table, wrapped up in blankets after a night of studying. In the days before cell phones with built-in alarms, some students got really creative and brought their own alarm clocks, plugging them into the wall and crashing on top of the study tables after pulling an all-nighter. As chock full of “WTF moments” as finals were, those moments were still some of the tamer things you’d see after working in a library for some time.

It’s safe to say I’d seen more sex and semen in the library than I did poop in the four years I spent among the stacks. I don’t know what it is, but apparently, musty old books are like Spanish Fly. Seriously. A lot of people have sex in the library. A lot. Once, I’d heard a couple having a very loud “afternoon delight” in one of the stairwells. Another time, I saw what I’d assumed were two patrons doing some garden variety canoodling that bordered on a lap dance. When I got closer, I realized that the two were actually engaged in gland-to-gland combat. While you can kick someone out of the library for chowing down on a Cheesy Gordita Crunchwrap, it’s a whole lot harder to boot someone for eating someone else’s Cheesy Gordita (if they’re not into that whole hygiene thing).

And while in flagrante delicto in the darker corners of the library was more popular than you’d think, the grad student study carrels probably saw the most action. These things were the No-Tell Motels of the library world.

Typically, grad students working on their thesis would rent them out for a semester to hoard all the books on their area of study in these carrels. (Fun library fact: While most library patrons are allowed to take out books for a two-week loan, grad students are able to take out books for a minimum of 30 days, or sometimes an entire semester.) When books showed up in the system as returned but were still missing from their rightful spot on the shelves, I would sometimes be sent into the study carrels on a “search and rescue” mission.

A lot of times, these missing books were still in the possession of grad students and locked away in these rooms. Sometimes I’d find the books. Other times, I’d find evidence that people had been fucking. It might not have been the grad students, but some would occasionally get careless and leave the doors to the carrels unlocked.  These carrels were like a homing beacon to frisky college students in need of a safe place to shag when their dorms were otherwise occupied by roommates getting their own freak on.

This one goes hand-in-sticky-hand with the aforementioned sex in the library, but occasionally, you’d find a used rubber somewhere in the trash or hanging off the side of one of the bookshelves. Really. That happened. One morning, I came in early and started reshelving a cart full of books. And then I saw “it.” “It” being a used jimmy hat filled with goo dangling from one of the shelves in the American history section. (Because, quite frankly, doesn’t George Washington crossing the Delaware get everyone all hot n’ bothered?) 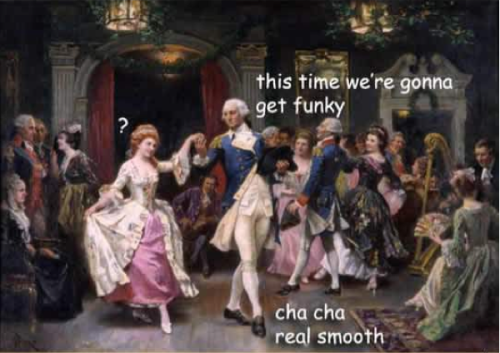 In my lifetime, I’ve been involved in more than my share of awkward conversations. However, let me tell you that there really is no good way to tell your boss that a particularly intimate item is suspended from one of the shelves.

“Is there anything on the books themselves?” he asked.

“Any patrons see it?”

After showing him the section where the sausage stocking was still hung from the bookcase with care, my supervisor surveyed the situation: “I got this.”

And with that, he whipped out a tissue from his pocket and calmly walked past the offending item, snapped it up in the Kleenex, and chucked it in the garbage can with one swift movement like it was a routine procedure.

If ever there was a visual for grace under fire, that would be it.

I could only infer that it wasn’t the first time my boss had encountered something of that nature. I’ve since looked to that incident as a metaphor for handling really uncomfortable situations: Be prepared as best you can. Then throw the scum bag in the trash and nonchalantly keep walking.

That Voodoo That You Do So Well

I’d seen a lot of strange things in the library, but the hands-down strangest was seeing what looked like some bizarre voodoo mini-altar that someone set up in one of the far corners of the library — back near the TN section with the books on mining engineering where no one ever goes. (Not even mining engineering students.)

One day, my ass was dragging and I wanted a quiet place to park my 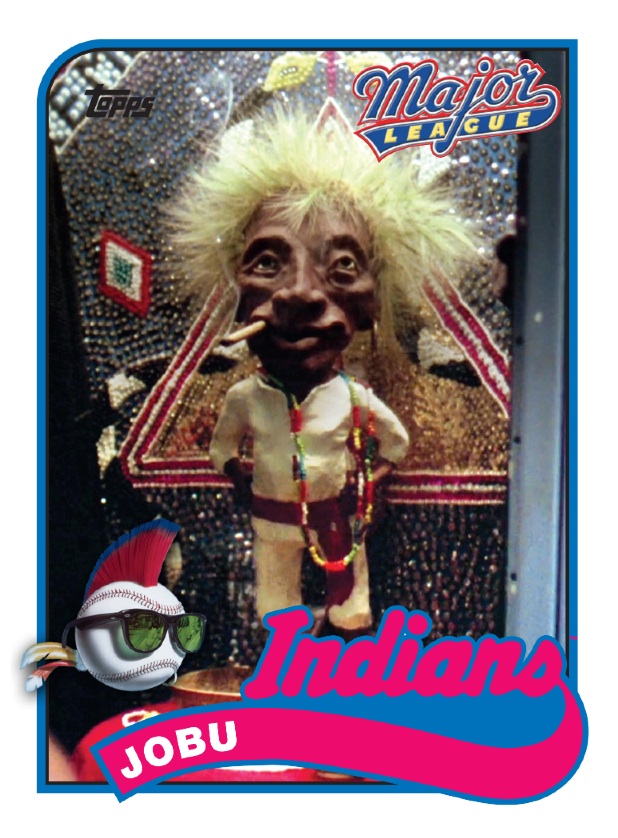 cart, read, and lay my Discman on a stable surface so the damn thing would stop skipping. I hauled it on over to the library equivalent of No Man’s Land and plopped down on a stool near a section of empty shelves.

Splayed out in front of me was a collection of playing cards with the faces cut out and replaced with actual photos. Making things even eerier was the fact that there were a few long strands of hair taped to the cards.

On top of that big, bucket of creepy, there were artfully arranged shards from a broken mirror scattered around the cards.

What. The. Fuck. All I wanted was a quiet place to read and instead I got someone’s fucking tribute to Jobu.

Suffice to say, that totally killed my vibe and my ass went straight back to re-shelving books.

In the future, I never went back to that spot unless it was absolutely necessary. Even when several of us were tasked with shifting collections and had to head back there, I always felt a chill go up my spine. Maybe it was an excess of air conditioning or someone stole Jobu’s rum and cheesed him off, but that part of the library continued to creep me out for years to come.

I don’t know what it is about dusty tomes of borrowed books, but when they’re gathered in one space, it tends to bring out a little bit of the weird in all of us. And I find that just as comforting as curling up in a chair and reading a good book. So, here’s to all the librarians, stacks assistants, stacks supervisors, and even the patrons who poop, penetrate, or practice arcane arts between the shelves. Thanks for keeping a little more of the weird alive and flowing into the world.