Victor Von Doom always gets the shit end of the stick.

Especially when it comes to the way he’s portrayed on film.

Doctor Doom is arguably one of the most multi-faceted villains in all of comics. As originally conceived by Stan Lee and Jack Kirby, Doctor Doom had an air of mystery, tragedy, and nobility. Until recently in comics, Doom had been the type of villain that, even at his worst, you could count on to keep his word. Victor Von Doom may have been behind several dastardly deeds, but if Doom made a promise, Doom kept a promise. There were usually no loop holes.

He was not a thoroughly evil piece of shit like the Red Skull, but rather, there were moments when Doctor Doom could be construed as an anti-hero rather than a straight-up villain. (Lest we forget, it was Santa Doom who saved Christmas when Santa was injured .) 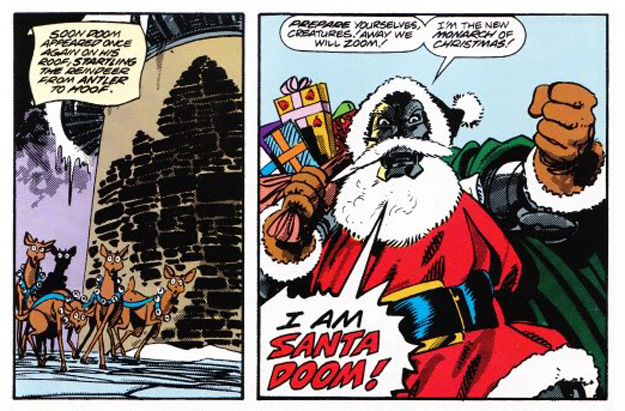 Lately, especially with regard to film versions of the character, the much-maligned Doom is often shown as a one-dimensional, vengeful megalomaniac with a deep and abiding hatred for his arch-rival, Reed Richards of the Fantastic Four.

This is a travesty meriting comic book fans to stand united in a plea for justice for Doom.

Seriously, Marvel, 20th Century Fox, whoever the hell you are… Get this shit right! Portray the beloved leader of Latveria the way he should be played!

Many of the films, television, and Netflix series based on Marvel franchises have done right by their characters, particularly its villains. Villains such as The Winter Soldier, Loki, Doctor Octopus, Ultron, and Kingpin (particularly in the Netflix series, Daredevil) have made the jump from page to screen with compelling backstories and complex characterization intact. Even if their origin stories deviated slightly from the comics, these characters were given layers and were not relegated to Johnny One Note Villain status.

Granted, there have been some clunkers in the mix. I’m looking at you, Iron Man 3. Yes, you and your shoddy treatment of the Mandarin. You had Sir Ben Freakin’ Kingsley play an intriguing villain and then turned him into a sad puppet in favor of making another actor the film’s main antagonist and introducing Extremis into plot. (That’s a rant for another time, but this drek did not go down too smooth with anyone.)

However, filmdom has had multiple chances to get Doctor Doom right and failed.

Requiem for Doom: Doctor Doom as the Anti-Hero

What makes Doom such a complex character is not just his back story, but that his character melds science and sorcery. While he has a foot in mystical terrain due to his heritage as the son of a witch, Victor Von Doom is also a man of science. Orphaned at a young age, he has no family. Since there’s no one else to take pride in his own accomplishments, Doom’s got to be his own biggest fan. He takes his science (and scholarship) very seriously, which could initially make one mistake him for a pompous douche.

While Doom’s douche-factor could be argued for or against by comic book purists, keep in mind: he is entrenched in a long-standing rivalry with Reed Richards, quite possibly one of the biggest tool bags lumped into the category of Marvel heroes. Reed Richards consistently makes decisions on behalf of others (and sometimes, the entire human race) with little more than a “My bad, dude” when decisions backfire, leaving others to reap more of the fallout than Richards himself. If you’re going to do battle with your enemy, sometimes, a little bit of your enemy rubs off on you.

Doom’s most selfless act in the comics, was his drive to use science to open a mystical portal to free his mother from Hell. Mama Doom met her demise as a result of a botched deal with Mephisto, making 666 Torment Avenue her address for all eternity. Doctor Doom, Best Son Ever, made multiple attempts in multiple universes to free his mother from the clutches of Mephisto. Put that in your Hallmark card and smoke it next Mother’s Day.

Yet, all of these interesting facets of Doom’s character have been largely overlooked on film. In both the 2005 and recent film adaptations of the Fantastic Four, Doom’s complex backstory is swept under the rug and he’s  just a generic villain with a hard on for Reed Richards. Boo.

What Could Have Been: Alternate Doom in Film

Doom’s sorcery skills could have made him a perfect foil for Dr. Strange (another mystical Marvel doctor!) in that character’s upcoming film. However, the films opted to ignore that fantastical (pardon the pun) aspect of the character, as well as his status as a ruler of Latveria. (You say “dictatorship,” Doom says “enforced monarchy.” You say “tomato,” Doom says “tomahto.”)

Rather than serve up yet another tired-ass reboot of the Fantastic Four, either Marvel Studios or 20th Century Fox could take a radical detour and give Doom his own film. It would be a novel concept, giving a villain his own film, tying together his backstory. While nearly all of the Marvel franchise films have been entertaining, they are admittedly formulaic. A Doom movie could be an opportunity to chuck the formula and do something just a little different.

Rather than attempting to skew younger, it might be wise to opt for a slightly older Doom and put an actor like Christoph Waltz in the role. He’s got the acting chops, Oscar cred, and a German accent! What’s not to love? With the stigma having been removed from comic book movies, this could actually be a plausible scenario.

Regardless of his actions, Doom’s intentions are often good. While recent comics have shown him capable of rather cruel acts, classic Doctor Doom is not nearly as dark as he appears at first glance. No, he’s not the cuddliest supervillain, what with all that metal armor and a mask to hide his disfigured visage. But Doom does love puppies. 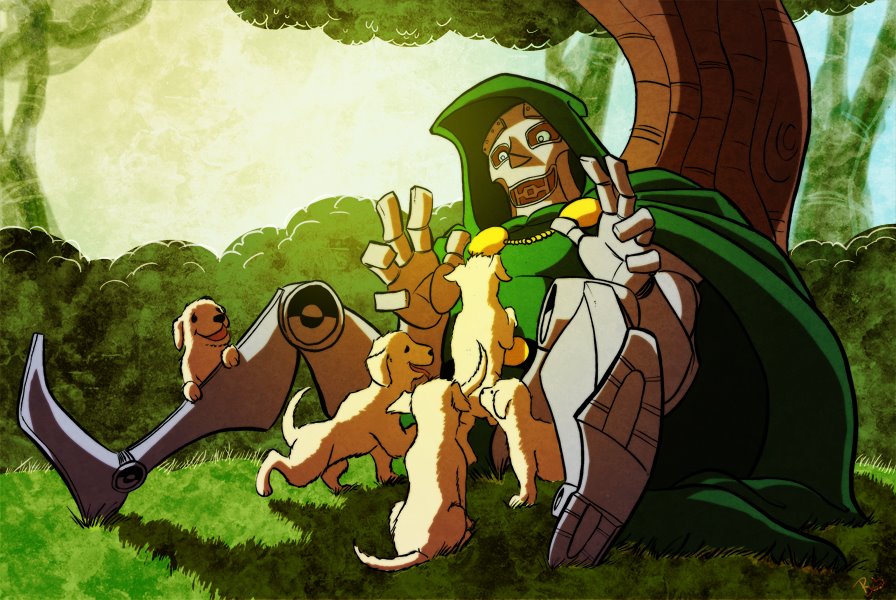 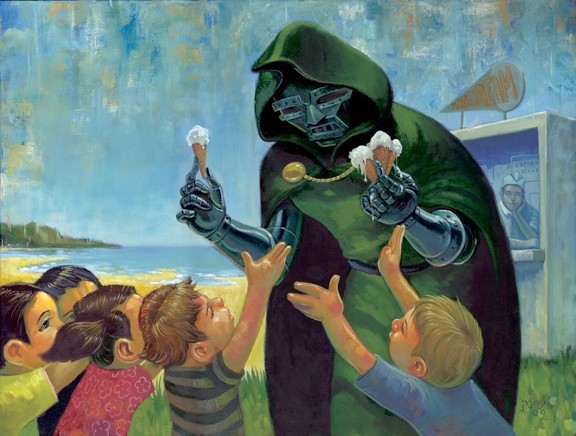 And yet, these images still depict him with more dignity and dimension that film versions have to date.

Do the right thing, Hollywood. Give Doom his due.