Updated June 2014: This blog post was originally published on March 25, 2009 — five years before Philadelphia’s Swiss Cheese Pervert escalated his activities and began driving around the region, flashing his cold cuts and asking unsuspecting women if they wouldn’t mind watching him get his rocks off while he diddled himself with dairy.

The Swiss Cheese Pervert was eventually apprehended and plead guilty to indecent exposure and harassment charges. He is currently on probation for eight years. Below is the account of the early days of the Swiss Cheese Pervert and his humble beginnings as just another creep on Craigslist. Let it be a cautionary tale that today’s Craigslist ad can lead to tomorrow’s more brazen attempts at confronting people with a handful of ham and a fistful of Feta. Below follows the original post on Delightfully Dysfunctional from March 2009.

Craigslist, that great provider of hilarity, gifted me with this utter gem this morning: (As a word of warning, this link (NOTE: Now removed) includes some very NSFW photos, one of which is this weirdo’s dong wrapped in a slice of Swiss cheese. I kid you not.)

Jesus. I couldn’t even make this shit up.

For the link-phobic and those who are lactose-penis intolerant and would prefer to read without visual accompaniment, here are some highlights from the original Craigslist posting, complete with commentary:

BWAAAAAHHAAAAHHAA!!! Oh, boy!  That’s rich!! Can you imagine hanging out with this dude, thinking you’re going to just watch TV, grab a beer or something and he’s got his junk wrapped up like Chicken Cordon Bleu?

But wait… It gets better:

“I tried many different kinds of cheese, like American, Provolone, chez whiz, jack, and cheddar, but settled on Swiss as the best. First and foremost, if ever a picture of cheese is used, most of the time they use a representation of Swiss cheese. But also because of it’s eye patterns, texture, and the way it feels against my penis….”

I love the rationale this guy uses. According to him, his justification for finding Swiss cheese so attractive is that when one requires a model of aged dairy, the image of Swiss cheese is called forth as its most stellar representation. By this guy’s standards, Swiss cheese is like the Playboy Playmate of cheese. 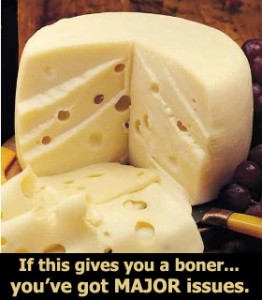 But wait! It gets even better!

“Some of the crazy things I used to do, was wrap a pound of slice Swiss cheese around my penis, wrap a bag around it, and secure it to my penis with rubber bands, then put my pants up, and go to local malls to check out the girls there. It was always my hope that a group of girls or a single girl would come up to me, and ask me about the bulge in my pants, in which I would tell her it was Swiss cheese, and ask if she was interested in doing it for me. It never happened tho.”

Oh, boy. We’re dealing with a genius here. Did it not occur to this mook that wearing an entire pound of cheese wrapped around perhaps the most disgustingly warm part of his anatomy would smell kinda funky? To hell with Drakar Noir and Polo! You’ll be beating the girls off with a stick when you wear the new, highly aphrodisiac scent of Cheese Dick!!

I mean, REALLY! This brother stuffs an entire deli case around his meat wand and and trots to the mall hoping that chicks will be checking him and his batch out. Are you SERIOUS?! If you’ve seen a picture of this cat, this guy is a CLASSIC case of one of those heinous dudes who think that just because they’re packing a wad in their shorts, chicks will FLOCK to them. Sorry, chief. We ladies look at what’s above the belt and the rest of the package… Not just THE package. Ew.

What the hell goes through someone’s head while doing this? He’s fixin’ up a batch of dick d’oeuvres in his shorts and is probably thinking, “Yeah. I bet the ladies will be checking me out. Ooooh, baby! I can’t WAIT for a whole gaggle of them to come up and ask me just what big daddy’s packin’. They’re going to be SO turned on! Hmmm… Should I bring some Russian dressing with me just in case I meet a nice Jewish girl who has a hankering for a Reuben?” 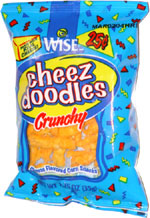 Thankfully, our friend the cheese afficionado clears things up by disclosing that he, in fact, does not eat the cheese after gettin’ busy with it. Well, that just makes it so much more normal now!

“One last note, I do not like cheese, except for mozzarella, and that is the one cheese I have never used on myself.”

Nice to know he draws the line somewhere.

“So no I do not eat the cheese after I am done using it for pleasure, it is discarded. I am always asked that question too.”

Uh… How many people does this guy actually tell that he likes to play with his Cheez Doodle to neccessitate a number of people asking him whether or not he eats the cheese after he’s finished?  To think that there are starving people in the world that might actually enjoy that cheese for its intended use. Wow. Talk about wastefulness during this recession.

On second thought… Dude, I don’t care if you don’t eat the cheese after you’re done with it, there’s no way in hell I’d eat a sandwich at your house. Or eat a sandwich ever again, for that matter. Suddenly, the condiment “Miracle Whip” takes on an entirely new — and significantly more disgusting meaning. Yick.

Seriously. The human race never fails to surprise me.  Nor does the fact that this Craigslist posting came out of Philadelphia.

As utterly fucking weird and disturbing as this dude may be, here’s hoping he eventually finds a woman gouda-’nuff for him that can tolerate his fetish!   (Sorry.  Cheezy pun…. Literally.)