Imagine an event so magical and monumental that it involves months of planning and preparation. An event that promises an enchanted evening filled with romance, formal attire, dancing, multiple regrets, and a drain on your bank account.  If you think I’m talking about a wedding, think again.

The prom has long held an important place in the high school landscape. (Umm… Carrie, anyone?) However, the importance of the prom appears to be growing, along with the price tag attached to it, as well as the lengths students will go to ensure they have a date for the big event.

First there’s the story about the kid who killed a girl because she wouldn’t go to the prom with him. Then there’s the kid who enlisted the aid of the local police to ask a girl to the prom. Clearly, these are kids who have placed far too much importance on one damn night in their high school lives. So, you’ve got one poor girl who’s dead just because she made the choicel to say no to someone and another girl who was shit-scared (although the story had a happy ending) as the result of an elaborate “promposal”

For the uninitiated, promposals are over-the-top ways to ask someone to go to prom with you. Curmudgeon that I am, I’ll admit, some of these promposals are really sweet and creative. Others are clearly too expensive, time consuming, and seem designed to guilt someone into attending the prom with you.

Prom vs. Weddings By the Numbers

A survey by CNN Money revealed that the average cost of what teens and their families are spending on prom night is just a little under $1,000. Contrast that with the average cost of a wedding in the U.S. — roughly $25,000, although it’s reported that most couples try to keep their wedding budget around $10,000. 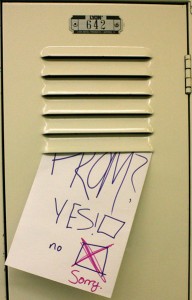 I did some digging and found a 2011 study that showed that the average teenager earns between $170 (females) and $177 (males) per week while working summer jobs. Adjust that figure for 2014 inflation and you’ve got kids making between $178.54 and $185.93 each week during the summer. (I’m assuming that this is before taxes.) If those same students are able to pull down that same weekly wage for the rest of the school year, they’re grossing around $9,300. (Again… Before taxes.)

You’ve got students throwing over one-tenth of their pre-tax earnings on one fucking night. Granted, they don’t have to pay a mortgage, contribute to the household food bill, however, they may be paying their cellphone bills and kicking over some cash on SATs or college applications.

Compare that to what the average American adult makes each year. StatisticBrain notes that the average American made $42,380 in 2012. Adjusting that for 2014 inflation and you’ve got $43, 616.55. Based on the average amount people spend on weddings ($25,000) and assuming the happy couple goes Dutch on kicking in some coin for their nuptuals, they spend around one-third of their combined annual income on a wedding. If you favor the stat that most couples try to limit their wedding budget to a cool 10 grand, then they spend only around 8% of their combined annual income on a wedding — less than what individual students spend on their prom.

Whether CNN Money figured in the cost of promposals into their $1,000-per-student figure remains uncertain.

Promposals place more of the prom pressure onus on guys to get creative and woo their intended with a whizbang of a display. And that shit best be on-point, son! Because you know that if your prom date only got 99 red balloons asking her to go to the prom and her friend Kayleigh’s date managed to finagle a bi-partisan flash mob consisting of members of Congress asking her to the prom on behalf of Johnny Football, you’re going to look like a first class dingus. 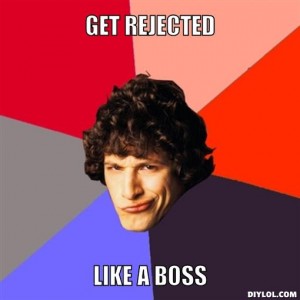 In a world that is being increasingly divided into stark “over-achiever” and “participation trophy winner” brackets, this kind of pressure can be pretty daunting.

The bulk of promposals seem to be levied by high school-age guys. Having been one of those broads with cajones enough to try — and fail — at asking dudes out to the prom,  I’m waiting to see a promposal from a smart, savvy Sadie Hawkins-minded gal make the media. Nevertheless, regardless of gender, rejection hurts. When you factor in a very public and potentially pricy proposal, it ups the ante that much more.

It’s hard enough to muster the courage to ask someone out, let alone ask someone to an event that’s hyped up more than the Oscars. Today, not only do you need to scrape up the fortitude to ask someone to the prom, you have to A.) get creative and B.) throw a little bit of coin at it, too.

Back in my day, rejection was free (less the cost of a pint of Ben & Jerry’s to drown your teenage sorrows).

If kids today can’t handle being rejected for the prom, imagine how bad they’ll lose their shit if they don’t get accepted to their first choice college or the first time they get turned down for their dream job right after graduation.

Beyond the added pressure promposals put on students, there’s another more insidious component to them: guilt. Chances are, if you know someone has pulled out all the stops to ask you to the prom, you’re less likely to say “no.” And, typically, the ones on the receiving end of a promposal (and this guilt) are female students. In theory, teenage girls should feel strong enough to tell someone that they don’t want to go to the prom with them. However, in reality, they may feel guilty and, in turn, pressured to say “yes” to someone who has gone through the trouble of crafting a grand gesture of a promposal.

It’s funny, but schools are more apt to ban female students from wearing pants to the prom (despite not having a prom dress code in place) than they are to put the kibosh on promposal hijinks. A number of schools across the country have gone to great lengths to require public school students to wear uniforms to create a more “inclusive” feel and take the focus off of pressure to dress a certain way or detract from a display of family income. However, promposals put the element of pressure back in the school setting in a way that has far more of an impact than wearing designer labels or a band t-shirt to class.

So, What Do We Do About It?

As far back as I can remember, prom has always been an important event. However, stunts like this just highlight the worst aspects of what’s supposed to be a fun night. Rather than friendship and youthful romance, a focus is placed on grand meaningless gestures and artifice. It’s all about how much you spend and “buying” the best date with a promposal. Machiavellian strategies have been applied to a rite of passage and a simple high school function.

I’m not begrudging anyone a fun experience or a memorable prom night. But students don’t need to be paying through the nose or prompting their parents to fork over some cash to foot the bill for the “mini-wedding” of their dreams. This goes for both guys and girls.

The end to promposals and overblown, overpriced, frivolous shit starts with parents telling their kids “no.” Let them whine, cry, and stamp their feet all they want. A parent rejecting their child’s demands will be a helluva lot less painful than shelling out a shit ton of cash to have Suzie Cheerleader or Johnny Football turn them down after they’ve spent more time and money on a promposal than they did their English final project.

Speaking from experience, a little rejection is good for the soul. You can’t always get what you want. But you learn to deal with it and move the fuck on.