Death. Taxes. The Undertaker maintaining his fabled winning streak at Wrestlemania.Three things that you assume are  inevitable.

Yet, on April 6th, 2014,  on “The Grandest Stage of Them All,” the Undertaker’s 21-0 streak came to an end with Brock Lesnar putting a blemish on the legend’s perfect record. Fans were stunned. Hell, the match’s finish was so stunning that it was probably a contributing factor in the death of 93-year-old beloved Hollywood actor, Mickey Rooney (R.I.P.).

Seeing the looks on the faces of fans at the Silverdo—-err… Superdome said it all: 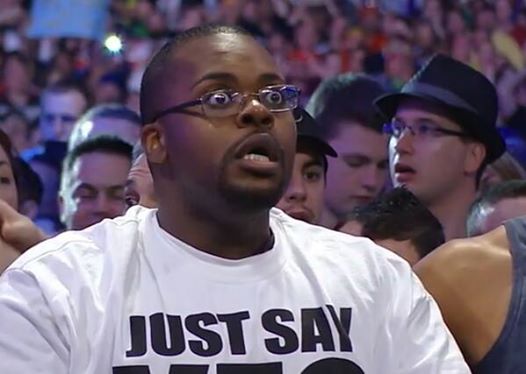 I had a similar look on my mug sitting on my couch.When I finally came to my senses, I unleashed a torrent of expletives. No one could believe it.  Lesnar beat the Undertaker and The Dead Man made a sad, slow, trudge up the ramp before he disappeared behind the curtain.

Now that the (literal and figurative) smoke has cleared, I understand just what the end of Taker’s streak means for wrestling fans. His career has spanned over 20 years, dating back to a time when a lot of current WWE fans — many of whom have children of their own — were still kids themselves. The Undertaker and his Wrestlemania streak were a part of our collective childhoods. In our adulthood, The Undertaker was the last vestige of a by-gone era of wrestling. Taker’s reign bridged the gap between the colorful and endearingly cartoonish days of the Hulk Hogan era, the Stone Cold Steve Austin-helmed Attitude Era, and sports entertainment’s current era.

It may sound melodramatic, but watching Undertaker’s streak end was the wrestling fan’s equivalent of seeing your childhood pass before your eyes and come to an abrupt halt.

Look, we all know that wrestling is “fake” in that the storylines are scripted and the matches are choreographed. Yet, the athleticism of the performers is real, as is the talent it takes to draw viewers into a storyline and to cheer for one guy and boo the other. (“It’s still real to me, damnit!“)  The current era of wrestling is all about hyper-realism. Wrestling today is less Tim Burton’s Batman and more Chris Nolan’s Dark Knight, taking the fantastical and implausible and making it darker, bleaker — and in turn, more realistic since we’ve all been conditioned to recognize that all endings aren’t necessarily happy.

To that end, our favorite wrestlers are a lot like Disney Princesses: Both are characters in an elaborately-woven story that provides a link to timeless tales of the past and a current cultural framework. (Not to mention, both have their own action figures, dolls, and a shitload of merchandise.) Their respective audiences believe in them and attempt to identify with them. 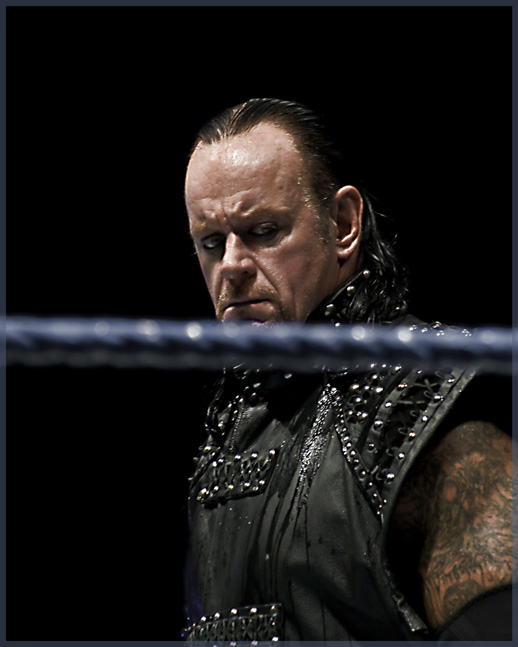 It’s more than a little ironic that a happy ending to the match would have seen a 7-foot tall goth refugee from a Clive Barker film standing victorious over the musclebound “Vanilla Gorilla.” To wrestling fans, not seeing Taker sit bolt upright after having been on the receiving end of an opponent’s finisher felt as gutting as it would be to an audience of children who had clapped their hands and said they believed in fairies, only to see Tinkerbell’s light extinguished forever.

In an age of rampant douchebaggery, the Undertaker’s ability to pull off a win despite insurmountable odds was something that even the most jaded smart mark thrilled to see. (Except, I suppose, for that one dude who yelled “You suck!” at The Undertaker after the match came to its close. There’s a man who plainly revels in his douchedom.)

The end to Undertaker’s streak, however, felt like more than a loss. It felt final.

In recent years, Wrestlemania retirement matches such as Ric Flair vs. the Undertaker and Shawn Michaels vs. the Undertaker pit “the streak” against a beloved wrestler’s storied career. As the man who retired so many legends, as the defeated Undertaker himself hobbled up the ramp to the backstage area, fans were struck by the awareness that this was (likely) his last match.Maybe what stung the most was that the fans themselves didn’t get a chance to say “goodbye.” Not just to The Undertaker, but to an entire epoch of wrestling.

No one saw it coming.

At the outset of the match, Taker came out in full regalia, wearing an elaborate black and red duster. The swirls of smoke, eerie theme music, and line of caskets marked with the names of his 21 bested Wrestlemania opponents lent a surreal touch to his ring entrance. For two decades, fans became well-acquainted with Undertaker’s carefully-orchestrated ring entrances. They were a Wrestlemania staple. Yet, for some reason, the schtick never got old. I chalk it up to it being a throwback to the wrestling that fans of my generation grew up with. No matter how many new faces appeared on the roster or who held the championship, Undertaker and his streak were something fans could count on every Wrestlemania.

Does anyone else miss Mantaur?

Don’t get me wrong. I’m not pining for the days of Mantaur and The Gobbledy-Gooker. However, sometimes, there’s something a little comforting about revisiting those turkeys of wrestling’s past while taking a stroll down Memory Lane.

Undertaker, his druids, and the sporadically-present urn were fixtures of a wrestling fan’s childhood. (Chances are, you probably had at least one Undertaker action figure in your collection.) In a business predicated on finishing moves, watching the Undertaker’s streak come to an end was not just an end to an iconic era of professional wrestling, but, for many fans, like a little piece of childhood coming to a hard stop.

So, next year, there will be one less constant in the Wrestlemania equation. Wrestlemania will still go on, but it’ll certainly be different.