Seth MacFarlane, Family Guy creator and voice of trash-talking stuffed bear Ted, met with mixed reviews for his turn as emcee at the 85th Academy Awards on February 24, 2013. Critics derided MacFarlane’s melange of crude humor and Old Hollywood song-and-dance, calling him out on the red carpet for transgressions against Oscar night decorum and possibly, humanity.

Blogger / editor Andrew Sullivan referred to Seth Macfarlane as “fantastically untalented.” TIME entertainment critic James Poniewozik noted that “MacFarlane was uncomfortable, smarmy, unfunny–and not even bad in any memorably creative way” before conceding that “he’s got a genuine love of show tunes and a decent set of pipes.” And Spencer Kornhaber, a senior associate editor at The Atlantic;  the New Yorker‘s Amy Davidson; and Linda Holmes of NPR all cried varying degrees of sexism and perpetuating negative stereotypes with regard to MacFarlane’s Oscar quips.

Even if you’ve only seen one episode of Family Guy, it’s apparent that tipping society’s sacred cows is pretty much MacFarlane’s stock in trade. Can these critics — or even the Oscar telecast-producing Powers That Be — honestly say that they were surprised — nay, shocked —  by MacFarlane’s infusion of irreverent humor to what has, in recent years, largely been an overblown, pretentious, and thoroughly bland affair?

Amidst other taboos, MacFarlane (with some help from Kristen Chenoweth) performed a song at the end of the Oscars ceremony poking fun at the nominees who didn’t win. Supposedly, during Hollywood’s equivalent of prom night, it’s a big no-no to refer to non-winners as “losers,” even if it’s meant in jest. Factor in the current obsession with the “Oh, pish! Everyone’s a winner!” mentality, and the MacFarlane / Chenoweth rendition of “Here’s To the Losers” must have made for a real clutch-the-loaned-out-Harry-Winstons moment. (Kind of makes you wonder if having nine or more Best Picture nominees is the Academy’s version of a participation trophy.)

Since when did we get so fucking sensitive? Since when are we possessed of such delicate sensibilities that making jokes about Rihanna and Chris Brown, or (even more ridiculously) Abraham Lincoln, constitutes as a violation of all that is right and decent in the world?

The fact that Law & Order: SVU is mining the Chris Brown / Rihanna story for episode fodder is reason enough to make the duo a punchline. (Pun intended.) Factor in Brown’s own willingness to swing at anyone with a Twitter account or Rihanna’s poor dating choices, and fame plus a repeating strand of bad decisions should rightfully prime certain celebrities for ridicule.

And why not? While entertainers are more than entitled to live their lives as they see fit, they are not above reproach. In our post-Puritanical, royalty-starved society, we often fail to remember that barely a century ago, the acting profession was not held in as high regard as it is now. Actors were viewed as entertainers – at best – and when a performance failed to please the audience, they were pelted with tomatoes. It was the job of an actor to entertain. By contrast, many of today’s entertainers must be handled with kid gloves lest their feelings get hurt. There are no tomatoes to be dodged when you’re wearing Marchesa.

Despite this push towards propriety, MacFarlane’s Oscar song-and-dance number, “We Saw Your Boobs,” was dubbed “sexist” by critics. In the song, MacFarlane ran down a litany of actresses who bared their breasts for the camera. MacFarlane’s gleeful singing was more “Thanks for the Mammaries” than a tribute to Oscar host of yore Bob Hope’s signature song, but then again, this is 2013 and the Hayes Code is a distant object in the rear view.

Critics called out MacFarlane’s song as being one of several supposedly misogynistic items nestled within his 3 hour, 35 minute hosting gig. New Yorker columnist Amy Davidson was one of the most vocal among these critics, saying:

‘We Saw Your Boobs’ was as a song-and-dance routine in which MacFarlane and some grinning guys named actresses in the audience and the movies in which their breasts were visible… What made it worse was that most of the movies mentioned… were pretty great… The women were not showing their bodies to amuse Seth MacFarlane but, rather, to do their job. Or did they just think they were doing serious work? You girls think you’re making art, the Academy, through MacFarlane, seemed to say, but all we—and the ‘we was resolutely male—really see is that we got you to undress. The joke’s on you.

What Davidson fails to recognize is that many of these actresses were in on the joke themselves (Charlize Theron being a particularly good sport) and played along, having pre-taped their “reactions” earlier. Is it a crime to not take yourself completely seriously?

Jennifer Lawrence: Oscar winner who did not show her boobs.

On the flipside, why is it that critics with such a sense of propriety seem to insist that whipping out the ol’ milk wagons is essential to crafting a great performance? Sorry, but showing your tits is not integral to a role. Bette Davis never interpreted “Now, Voyager” to be a signal to unlatch her bra. And even Mae West, queen of innuendo, never aired her ample assets on film. As for actresses who do bare their breasts for a role, hey, it’s their prerogative. However, I don’t feel it’s necessary to defining an “authentic” performance. (And apparently, neither do basic cable network censors who re-air these films with scenes depicting nudity removed from the final cut.)

As a female, I will admit that it seems to be more common for actresses to flash the camera for roles of some gravitas than it is for actors to hang dong to be taken “seriously” in a role.

However, MacFarlane has nothing to do with these decisions. He’s merely an observer whose song made a valid point. If you have a problem, take it up with filmmakers who deign nudity to be an important part of making a scene “real.”

For now, let’s just say, “No, honey. It wasn’t necessary, but you just showed us your tits. Thanks!”

MacFarlane was also put on blast for comments deemed “racist,” as well. One joke involved pretending to mistake Denzel Washington for Eddie Murphy (“I loved you in the Nutty Professor movies!”) while another joke uttered by alter-ego Ted brushed up against Jewish stereotypes (“I was born Theodore Shapiro and I would like to donate money to Israel and continue to work in Hollywood forever.”).

It’s pretty obvious that these weren’t malicious statements, but rather played off of the unsettling undercurrent of racism that still exists within the United States. Despite how progressive a nation we believe ourselves to be, one needs to look no further than the 2012 presidential campaign trail for a prime example of thinly-veiled racially-charged sentiment. A gander at racist tweets from average citizens that were posted following confirmation of President Obama’s second term indicated that it was not his stance on social or fiscal matters that served as a basis for strong dislike from folks in certain regions of the country, but rather the color of his skin.

Again, this was MacFarlane merely stating the obvious and poking fun at closet racists.

Ditto for the Jewish jokes. The Anti-Defamation League issued a statement which said:

When one considers the global audience of the Oscars of upwards of 2 billion people, including many who know little or nothing about Hollywood or the falsity of such Jewish stereotypes, there’s a much higher potential for the ‘Jews control Hollywood’ myth to be accepted as fact. We wish that Mr. MacFarlane and the Academy Awards producers had shown greater sensitivity and decided against airing a sketch that so reinforces the age-old canard about Jewish control of the film industry.

Man, and they say Jews are supposed to be known for their humor! (Plunking down my Half Jewish Card, I claim immunity.) What the ADL is glossing over is that MacFarlane was poking fun at anti-Semites. Conversely, you don’t see Mel Gibson issuing any press releases for the jabs MacFarlane took at him. This year’s Oscar host is simply an equal opportunity offender. 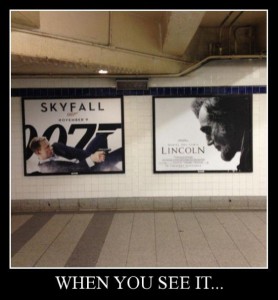 And apparently, MacFarlane managed offense “too soon” with a joke about Abraham Lincoln’s assassination over 150 years later, claiming that that “the actor who really got inside Lincoln’s head was John Wilkes Booth” when contrasting portrayals of the Civil War-era president as played by Raymond Massey and Daniel Day-Lewis.

Despite what detractors may have said about his stint as an Oscars’ host, it looks like MacFarlane will have the last laugh. Ratings for 2013’s televised filmdom fete were up a solid 11% from last year’s broadcast, pulling in 40.3 million viewers – one million more than last year’s Oscars. Among those 40.3 million viewers was a higher percentage of males and adults in the 18-34 age range. Typically, the Oscar viewership is an estro-fest with 62 % of those watching at home being possessed of two X chromosomes. This year, MacFarlane drew 34% more males (ages 18-49) than last year’s broadcast, while 16% more men between the ages of 18 and 40 tuned in this year as opposed to in 2012.

With promos having billed this as “an Oscars that guys can enjoy,” the ratings are proof that having MacFarlane host the ceremonies succeeded in bringing some more sausage to the table — or at least a more accessible, down-to-earth touch that we unwashed masses of either gender could enjoy.

In spite of the fact that critics like to believe they hold the most sway, box office numbers and Nielsen ratings indicate that often, critics’ tastes and those of the general viewing public rarely dovetail. In fact, the critics seemed to be more genuinely offended by MacFarlane’s performance than actors or Awards attendees themselves. Way to be a wet blanket, guys!

Overall, it seems as if critics had already made up their minds beforehand that they would attempt to rip Seth MacFarlane’s Oscar hosting duties to shreds.  Since MacFarlane said that there is “no way” he would host the Oscars again, perhaps the critics can help the Academy select a suitably bland, inoffensive host for next year’s ceremony. I hear Pat Boone’s calendar might be open next February.