Ah! The Internet! Not only has the World Wide Web made this world a little smaller, technology has also presented each of us with many an opportunity to say, “Thank God I’m not them.” 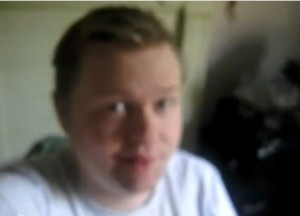 Case in point: The goof who decided to send a video introducing himself to his fiancée’s best friend and broaching the delicate topic of having a three-way. And unwittingly posted it publicly on YouTube. (Note: The original video has since been removed by the poster from YouTube, however, the UK’s DailyMail had the foresight to grab a copy of the clip before the original went tits-up.)

As far as I’m concerned, this is a horrible breach of etiquette. What happened to the days of introducing  yourself in person to the woman who would be one-third of your uncomfortable sexual tryst? Doing so via digital means is just so uncouth and impersonal. (And what’s with the sub par film quality? What are you working with there, buddy? A 2MP phone camera, or did you just smear Vaseline on the lens?)

We’ve already ascertained that Zack (the blundering would-be Don Juan who accidentally posted the clip) is not the sharpest tool in the shed, what with not being able to distinguish a “Send Message” button from a “Humiliate Yourself On YouTube” button. That said, let’s talk about this guy’s game.

As for the intended recipient of this video, one can only imagine her reaction upon seeing this splashed about on YouTube: “Wow. I always wanted to have a three-way with Samwise Gamgee.” 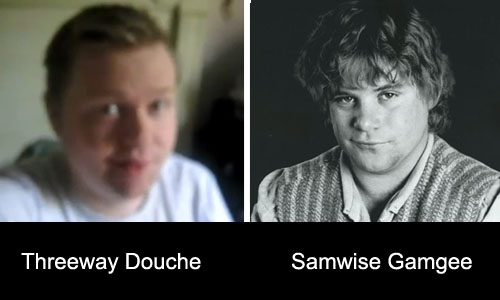 Talk about playing it cool, on the subject of three-ways, he notes: “Which is something I’ve never done in my life before, obviously.”

Or maybe he was planning on whipping out a few of these scenarios to spice things up:

As for timing, this is where he really tries to play it cool:  “It could be this week. It could be next week… Or whatever, you know.”

Which is a nice segue from the dude’s self-assured bravado (“we could do things that were never done in a threeway”) and utterly awkward passivity.

And uh, I just figured it would be something we could do sometime.”

Someone really needs to write an etiquette book on how to properly conduct yourself before, during, and after a three-way.