President Barack Obama should consider himself fortunate that VH1 did not tabulate the votes on November 6th, 2012. If so, there would have undoubtedly been some ballot box manipulation and abject partiality as displayed by the network’s glaring denial of the people’s choice where it concerned the “America’s Hard 100” countdown.

Over 34% of fans who voted on VH1’s website cast their ballot for goth metal quartet Type O Negative and their breakthrough 1993 hit, “Black No. 1.”  The tongue-in-cheek ode to goth chicks and their preferred shade of hair dye was the overwhelming winner of the fan vote, besting such mighty, metal contenders as AC/DC’s “Back in Black,” Dio’s “Holy Diver,” and Guns N’ Roses’ “Paradise City.”

Type O’s nearest competitor, Bon Jovi’s “Livin’ On A Prayer,” garnered a paltry 11.4% of the vote.

The clear winner, Type O Negative, should have taken the “No. 1” slot on the countdown.

However, that was not the case.  When the episode featuring the Top 10 of “America’s Hard 100” finally aired, “Black No. 1” was dropped down to “Black No. 2” and Bon Jovi’s “Livin’ On A Prayer” prevailed, taking top honors and the numero uno position on the countdown.

And so did several other viewers, particularly those who created a petition to take VH1 to task for ignoring the popular vote.

Fast forward to 2012 and perhaps VH1 just wanted to recycle the same video package they did for the song back in 2006.  You know the drill: “And now… Taking the Number One spot on our countdown….You voted for Bon Jovi’s “Living On A Prayer! Wheeeee!!!”

It’s not that I have a particular dislike of Bon Jovi or the band’s toothsome namesake.  Bon Jovi is a good band with some catchy tunes.  Living in  close proximity to New Jersey, I can honestly say that Jon Bon Jovi seems like a pretty swell, non-douchey guy. I don’t dislike Bon Jovi… but I sure as hell don’t like them as much as VH1 does.

Upon closer examination, VH1 and their sister network VH1 Classic seem to have a raging Bon Boner.  Not only did they place the band and “Living On A Prayer” at Number One on two separate countdowns, they’ve also run and re-run a show on the Top 10 Bon Jovi videos, Maybe the network is lobbying hard for Jon Bon Jovi to star in a redux of the abominable “Rock of Love” series, stepping in for (the actually douchey) Bret Michaels, should the singer ever split with his longtime spouse, Dorothea.

Who knows.  The point is, the fans voted for Type O Negative by a landslide only to have VH1 turn around and wipe their asses with their votes.  Type O Negative may not have the household name recognition of Bon Jovi among casual metal or music fans, however, it was not casual fans who voted in the poll, nor sat through the countdown hoping to see their favorite band emerge victorious. 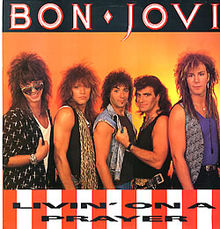 As a metal fan myself, I can safely say that most hardcore metal / hard rock fans prefer Type O Negative to Bon Jovi.  In terms of a strictly metal legacy, Type O has far more in common with Black Sabbath than Bon Jovi who, as of late, shares more turf with Taylor Swift as pop rock with a dab of country.  As evidenced by the poll, Type O’s following remains dedicated, even after the untimely death of the band’s lead singer, Peter Steele (rest in peace, Green Man), in 2010.

Considering that VH1 Classic is host to the documentary series “Metal Evolution” and Eddie Trunk’s “That Metal Show,” it’s a shame that their pollsters do not know or respect their audience, particularly when they ask them to choose a winner.  Bon Jovi is not a bad band, however, they were not the band that won the poll, despite what VH1 wanted viewers to believe.

It’s easy to say, “Hey, man.  Calm down.  It’s just a poll about rock bands.”  And you’d be right.  However, it’s the principal behind unfair voting manipulation that gets my goat, particularly so close to a time when presidential elections were held in the United States.

Fortunately for me, the guy I voted for retained the highest office in the nation by a large margin. However, if the candidate I didn’t vote for walloped President Obama in the election the way the President trounced his competitor, I’d have to accept that it was what the bulk people of the United States thought was best for them and this country.

If you view Bon Jovi as a major party candidate and Type O Negative as a third-party candidate, it’s frustrating to see a band with more mainstream recognition sans fervent backing or voter turnout recognized as a winner when, transparently, they were not. Bon Jovi just happened to be the darling of the VH1 Powers That Be who tallied those votes.

Granted, this is an extreme example.  A VH1 Classic poll does not hold even a fraction of the earth-shattering weight of a presidential election.  At its crux, however, the issue is one of respecting the will of the people and the importance of having some level of faith in the system of tallying votes honestly and accurately. In that sense, VH1 failed miserably.

Now enjoy a clip of the true winner, Type O Negative’s “Black No. 1”: