Despite ’80s fashion making a comeback in the 2010s, for every stunning floral blazer or peplum skirt that has reappeared, there are some fashion trends best left in moth balls.   Music videos of the 1980s serve as a fine guide as to what not to wear when attempting to choose a modern ensemble with an ’80s flair.   Surprisingly, some of the best (or worst) examples come not from women in rock videos… but men!

Join me on a fashion odyssey through time.  Together, we shall gander and guffaw at the garment gaffes of ’80s musicians and learn that some retro chic should stay in the past!

Exhibit A: John Waite in “Tears” 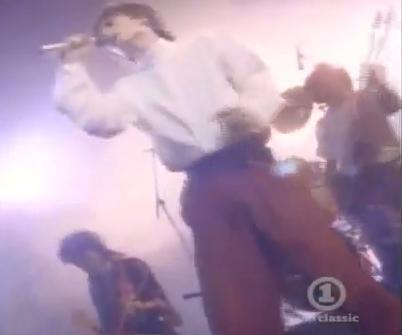 Those pants. The damage they do.

Allow me to preface this by saying that I think John Waite is one of the most underrated vocalists of his generation. The man has a beautiful voice, but sadly no fashion sense, as evidenced by the video for his 1984 single,  “Tears”.

The opening shot sees Waite in a cage that resembles a prison cell.  It isn’t until he kicks free of the cage that we see just why Johnny Boy was thrown in the couture clink.  Apparently, John Waite’s “stylist” (and I use that term loosely) culled his wardrobe from the Misses Career Separates department at J.C. Penney.  The end result resembles a cross between Dorothy Zbornak and k.d. lang.

Everything about his look is high:  High-necked blouse.  High-waisted trousers.  He must have been high to agree to wear this!

The granny blouse is bad enough.  But THOSE PANTS! Not only are they high-waisted and maroon with a thick black belt, but they have an almost genie-like balloon quality to them.  (If I was John Waite, I know what one of my three wishes would be.)

At least the song is catchy. I found myself singing along and changing chorus to “Those pants / The damage they do / You’re breaking my heart with those pants / And that blouse is heinous, too”.

Making matters worse is John”s unfortunate Dorothy Hamill ‘do.  He may have the figure skating legend’s iconic hair, but sadly, John Waite does not possess Ms. Hammil’s grace.  His dancing is as painfully white as the shoes he’s wearing.  (He’s wearing white shoes, for God’s sake! With maroon pants! WHITE SHOES!) As if his stilted, side-to-side “dancing” throughout wasn’t cringe-worthy enough; at 2:38 on the video clock, John attempts a pirouette.  He whiffs, misses, and staggers in place to complete the circle.  It’s pretty bad.

Now I know why this song is called “Tears.”  I weep for poor John Waite having to endure such a fashion faux pas. I want to pat him on the back and give him a cookie and a copy of Harper’s Bazaar.

Exhibit B: Alphaville’s Marian Gold in “Big In Japan” 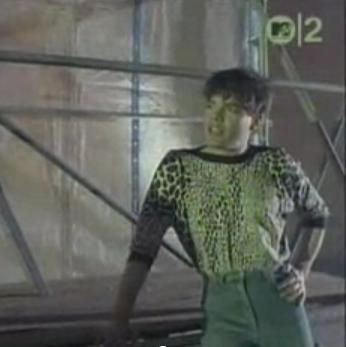 Somewhere, there is a hipster pinning this look to his Pinterest page right now. Pity him.

German synth-pop group Alphaville initially called themselves Forever Young.  Instead, they opted for Alphaville and used their original moniker as the title of their biggest hit, “Forever Young.”  Although it was released in 1984, “Forever Young” received a relatively recent resurgence in popularity having been featured in Napoleon Dynamite.

Ironically, in their video for their other hit, “Big In Japan,” Alphaville’s lead singer Marian Gold dresses like Napoleon Dynamite if he was unleashed in Forever 21.

Okay. I get that for parts of the video, Gold and his Alphaville cohorts are dressed in pseudo-samurai garb.  They’re trying to be conceptual and I can respect that.

No wonder why the chick gave him the brush off.

As hideous as his “Big In Japan” look may be, I’m sure there is some hipster dude somewhere that will add Marian Gold’s skintight mom jeans and leopard print top to his Pinterest page.

As if it couldn’t get any worse, Alphaville’s lead singer accessorizes his look with many, many creepy faces. This culminates at 2:57 on the video clock.  After a frenzied string of eye bulges and bizarre smiles which would normally be accompanied by the words “we’re gonna need a bigger boat,” Gold goes for the big finish with the “Smile. Smile. SMILE!…. Don’t smile.” sudden break.

Exhibit C: Gene Simmons of Kiss in “Tears Are Falling” 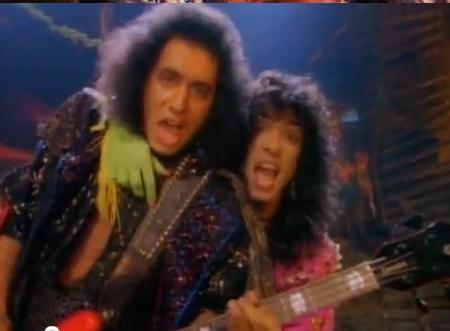 Kiss is one of my favorite bands of all time and the first band I ever saw play live.  Gene Simmons (along with Eric Carr, rest in peace) remains my favorite band member.  Although I may be in the minority here, I happened to love their music in the ’80s and maintain that they had a better band lineup after they took off the makeup.

As much as I loved the music of the band’s glam period, Kiss’s ’80s fashion looks were a disaster for Gene Simmons in particular.  Bruce Kulick, Eric Carr, and (especially) Paul Stanley were able to make the neon, fringe, sequins, and Working Girl shoulder pads work.  Gene Simmons, however, could not.

When you’re a big, hulking, swarthy brute like Gene, it’s kind of hard to make the fashion transition from “The Demon” — complete with spiked gauntlets and a metal codpiece — to Liberace’s body guard, decked out in a sequin duster with fringed epaulettes and purple satin trim as worn in Kiss’s 1985 video for “Tears Are Falling”.  This may pass muster if you’re a willowy wisp or under 6’2″… However, when you’re  well over 200 lbs. at close to 7′ in platforms, fringe and sequins don’t really make the most of your natural attributes. Unless your name is Trigger.

Factor in the unitard paired with spike heels beneath said duster, and this is just not a winning look for Gene.   Making matters worse, he should have used a deep conditioner / anti-frizz combo before filming that day.  The end result is a truly awful case of helmet hair.

Trust me.  I understand what it’s like to have naturally wavy hair.  But when you’re in a video for a song called “Tears Are Falling” that relies heavily upon rain as a metaphor, you need to anticipate that coiffure conditions are not going to be optimal.  Heat! Humidity! Moisture! All very bad things when you’re working with curly hair to begin with, let alone curly hair that hits above chin length.

As much as I admire Gene’s chutzpah (Hey! I’m part of the tribe, too! Half Jewish on my father’s side! Mazel tov!) and his knack for mugging the camera in a good way with his signature winks and tongue wags; Simmons gives John Waite a run for his money in the area of woeful dance moves.  At exactly 1:00 on the video clock, Gene executes a stumbling turn on his stiletto heels.  Ouch.

Please, Gene.  Leave the dancing to Paul.  (Not that perfect Paul Stanley doesn’t hit a snag or two in the video, himself.  Observe at 0:15 seconds into the video. As Paul’s lady friend is tearing down the curtains, Stanley stands in the corner and looks as if he’s taking a whiz on the wall before dramatically turning to face his interior re-decorator…. Oh, well.  I still covet his awesome rhinestone jersey in the “Crazy, Crazy Nights” video.)

Nevertheless, I will give Gene some credit for the fabulous statement necklace he’s rocking in the video.  Statement necklaces are in now and seemed to be on-trend back in the mid ’80s.  And despite his atrocious ensemble, Gene at least looks like he’s having fun and carries himself with confidence.  And confidence is the best accessory any man, woman, or androgynously clad musician could have in their fashion arsenal!