In an effort to become the blogosphere’s Ken Burns of blunt-force head trauma, I present to you the third installment of “Objects I Have Been Hit in the Head With.”

The events here take place a little more than a year after I got beaned in the head with a door off its hinges. Things changed in that relatively short span of time. Instead of finding ourselves cast as cartoonish sibling adversaries, my brother and I had started to develop a real friendship.

It was the summer of ’92 and my brother was involved in Little League. He had just been made first baseman for Fiscus & Lewis, a team named for a local masonry company. (In lieu of cool mascots or intimidating names like “The Maroon Marauders” or “The Teal Terrors,” Scranton Little League teams were named for regional sponsors.)

Having bungled one game already after being handed such a sacred duty, my brother was determined to do right by his coach and teammates. He began practicing like it was his job. Considering it was the summer and he was only 10 years old, Little League pretty much was his job.

I didn’t have anything better to do, either, and decided to help him practice in our front yard.

It was a familiar summer scene: Mom sat on the grass in her lounge chair, soaking up the sun and baking to a golden bronze. Occasionally, she’d pick her blonde head up from her crossword puzzle to see what my brother and I were up to. It reminded me of when we were younger kids, playing school with Mom as she used a little chalkboard and colorful magnetic letters to make learning fun.

Now, my brother was learning a different skill. We alternated on working on his batting and catching. While my brother was a natural athlete, I was the complete opposite. Still, with Dad at work during the day, I was the only game in town and willing to try to help him improve.

My brother just nailed the pitch I had thrown, sending the ball flying into a shrubbery. I told him I’d retrieve it.

He was in his zone, trying different batting stances while I looked for the ball. He didn’t see me when I trotted up the hill, recovered ball in-hand and just a few feet behind him as he worked on his swing.

That’s when my brother’s bat accidentally connected… With my face.

The end of the bat smacked hard against my jaw with a loud crack.

Realizing what he had just done, my brother dropped his unintentional weapon to the ground.

Viewing the scene from her orange-and-white lawn chair, Mom flung her sunglasses off and screamed. “Lana! Are you okay!?”

I turned my head slowly towards her. “Ow?” I replied. It was more a question and less of an exclamation. The force of the blow hadn’t really registered. I felt something hit me. I knew I should be in pain, but I wasn’t. I felt a bit of a sting near my jaw, but the sensation was confined to the skin where the bat had made contact and was not a throbbing bone bruise.

Mom got up and inspected my jaw while my brother apologized profusely. I was okay. There was a small red mark, but that was about it. Fortunately, my brother had been using his yellow plastic practice bat that day. If he’d been using the regulation aluminum BomBat or a wooden bat, I might not have been so lucky. It wouldn’t have been too much fun to walk around for the rest of the summer with “ellivsiuoL” imprinted into my cheek.

It wouldn’t be the last time I’d be hit with a bat. Although, the next time, I was voluntarily hit in the leg.

That same summer, my parents had somehow managed to pick up five tickets to see the local Triple-A baseball team, the Scranton/Wilkes-Barre Red Barons, play. Most of my brother’s friends already had tickets to go with their families or weren’t available the night of the game. So, my parents let me offer the fifth ticket to one of my friends to come with us.

That weekend, one of my “friends” from my old public school days had come over the house to hang out.

My family and I didn’t plan on Boring Friend’s father telling her she “had to” sleep over at our house, displacing my brother from his room for the night. (Boring Friend’s father probably had some slam-piece spending the night in his kid’s room.) Mom was not a fan of sleepovers, let alone impromptu ones where the kid told her she had to stay over. Taking pity on the girl, Mom let her spend the night even though she was not happy about it.

And neither was I.

Boring Friend was one of those friends you can tolerate in small doses. They’re cool to talk to on the phone for a half hour or hang out with on the playground when other friends can act as a buffer or coax more interesting qualities out of that one friend. In lengthy one-on-one scenarios, however, Boring Friend was pretty hard to suffer.

And if I found Boring Friend’s extended stay hard to deal with, you can only imagine just how much my brother was loving it.

It was noon the next morning and Boring Friend was still in bed. Unshowered. I had already been up for several hours at that point, as was the rest of my family.

An hour and a half later, Boring Friend finally got her ass up, ate breakfast, showered, and had time for a quick phone call with her father who recommended she stay over yet another night. 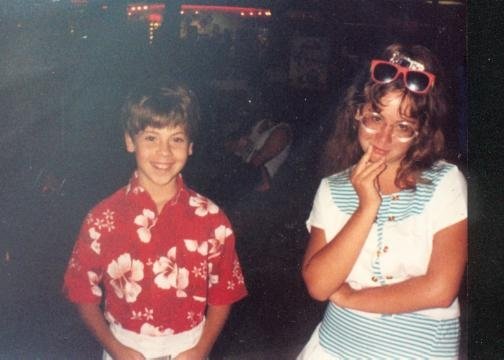 My brother and I circa 1992. I deserved to be hit with a bat for wearing two pairs of glasses.

“She’s seriously worn out her welcome,” I said to my brother once I was out of earshot. “Who the hell stays over at a person’s house and sleeps alllll day in a stranger’s bed?!”

“And it’s my bed she’s sleeping in!” my brother declared, his voice full of righteous indignation. “When Mom hears her father said she should stay over tonight she’s going to hit the roof.”

“Seriously, dude,” I replied. “I do not feel like dealing with her for another whole day. And I sure as shit don’t want her to come to the game with us. We gotta get her father to pick her up and take her home.”

An hour later, after lunch, Boring Friend parked her ass in my room.

“So,” I said, having run out of things to talk about. “Wanna go outside and play for a bit before the game?”

Boring Friend sighed laboriously. “No. I think I want to take a nap.”

I’d had enough at this point. This bitch needed to go. “I’ll be right back,” I said. “I’m going to grab some snacks.”

I briefed my brother on the situation and we hatched a plan that would send her packing. It involved my brother bursting into my room and attacking me like a deranged madman in front of Boring Friend. The plan hinged upon me agreeing to be clubbed in the leg with a baseball bat. Not just any bat. The dreaded aluminum Bombat.

“Don’t worry. I’m not going to whack you in the knee or anything,” he reassured me. “I’ll hit you in the thigh where you’ll have enough meat to cushion the blow.”

I nodded, steeling myself for what would go down in approximately 15 minutes. I had reservations, but they were eclipsed by the thought of spending another night with the immobile mass now stretched across my bedroom floor attempting to get her nap on.

I brought back my snacks, which Boring Friend gobbled down with gusto before flopping back down into a prone position. 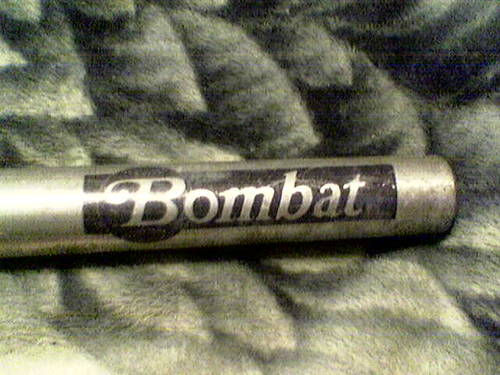 The BomBat: A weapon of mass destruction in the hands of a 10-year-old.

Just then, as planned, my brother burst into the room, spouting a flurry of obscenities and wielding the Bombat.

Boring Friend leaped from her spot on the floor, looking on in in horror as I was manhandled.

As I was sitting on the floor, my brother grabbed my leg like he was about to put me in the Figure Four. He dragged me out of my room by my leg and into the hallway. He raised the bat high above his head and brought it crashing down across the inside of my leg. (The kid had really worked on his swing that summer and had some real power behind that bat!)

I screamed in pain, tears coming to my eyes. It hurt a lot worse than I thought it would. (My brother later told me that it had to be convincing if we really wanted to Boring Friend to leave.)

My parents came running. Dad pried the Bombat from my brother’s hands while Mom helped me to my feet. I was wearing shorts that day and a huge red welt had appeared on the inside of my leg.

As I had hoped, my brother had told my parents about the plan beforehand. Mom turned to Boring Friend and said, “I see Raph is in one of his ‘moods’ again. You should probably tell your father to pick you up. I don’t want him to go nuts on you, too.”

Boring Friend nodded and got on the horn with her father. My brother had picked up the phone in the other room and listened in on the call. He and Mom felt a little bad as Boring Friend’s father chewed her out to the point of tears, angry that she was coming home a day early (which was, in reality, actually two days later than she was supposed to be back home). It was an awkward situation.

Within ten minutes, Boring Friend’s father came to pick her up. He owned a small business in town and was kind of a dick. He didn’t utter so much as a “thank you” to my parents for allowing his daughter to spring a sleepover on them.

I felt bad that Boring Friend had such an asshole for a father. But I was really glad she was gone.

I breathed a sigh of relief as they drove out of sight before speaking. “Since we have an extra ticket, could we invite Dave to the game instead?”

My brother nodded enthusiastically. My friend Dave and I had been pals since second grade. He was pretty much considered family and like another brother. The fact that even my little brother got along with him was a true testament to how likeable Dave was.

“Oh, good!” Mom exclaimed. “I was worried we’d end up having to take that girl with us to the game. Go call Dave!”

I high-fived my brother before calling my friend. We picked Dave up en route to the game and ended up having a great time — despite the war wound I received from the BomBat.

Hey, sometimes you gotta take one for the team.