In a recent installment, I ran down a list of unintentionally hilarious moments in hair metal history. At the time, I wrongly assumed that accidental humor was the sole proprietorship of rock videos made between 1985 and 1995. 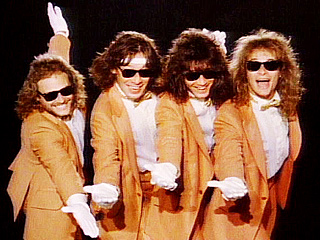 In their Van Heyday, Van Halen were the kings of intentional comedy in their music videos. A quick gander at the oversexed grandeur of “Hot For Teacher” or the costumed glory of their cover of Roy Orbison’s “Pretty Woman” and it was obvious Van Halen had a solid sense of humor.

Then, Van Halen — or “VH” to legions of fans too disenfranchised to bother with writing out the band’s full name — started taking themselves waaaay too seriously. I ain’t talkin’ ’bout love — or the Sammy Hagar years, for that matter. (While Dave was a much more fun, showmanship-oriented frontman, VH made a lot of great music with Hagar.)

No. I’m talking about the decline that began when the band replaced Sammy Hagar with Gary Cherone (formerly of Extreme) as Van Halen’s lead singer.  Cherone’s installment followed a brief reunion with Roth, which lasted all of several minutes on the 1996 MTV Music Video Awards .

The only good material to come out of Van Halen’s Gary Cherone years were the interviews with Eddie and Alex Van Halen kvetching about Roth and Hagar like two refugees from The View.

Eventually, Hagar came back to the fold.

Then, the band kicked out Hagar yet again. This time, they told him to take longtime bassist Michael Anthony with him.  (The former Van Halen-ites ended up forming Chickenfoot together in 2008.) 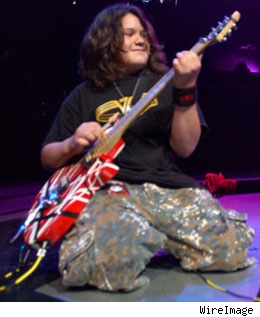 If this was any other kid who hadn’t sprouted pubes yet, he wouldn’t be playing in Van Nepotism…err… I mean “Van Halen.”

That’s when things got really weird. To replace Anthony, Eddie Van Halen brought in his then-15-year-old son, Wolfgang on bass.

That’s right. No one said, “Hey! I wonder what Billy Sheehan’s up to?” or “How about auditioning some battle-tested studio players for the gig?”

Instead, Eddie brought in a high school sophomore, citing that the addition of his son would have a “positive affect” on the band. (“Positive affect” must be a synonym for “nepotism” or “someone who won’t offer an opinion that clashes with Eddie Van Halen’s.”) To Wolfie’s credit, he’s a competent bassist, but he’s certainly not going to make anyone’s Top 50 list. However, the youngest Van Halen lacks Michael Anthony’s background vocal chops which always lent a nice bit of harmony to VH’s classic tunes.

Fast-forward to 2012 and Van Halen has reunited with David Lee Roth. The band is gearing up for the release of their first album with Roth since 1984, titled A Different Kind of Truth.  One listen to “Tattoo”, the first single from this upcoming album and the “different kind of truth” that becomes apparent is that these guys aren’t back together for “a love of the music, maaaan.”

The song itself sounds like recycled ’70s and ’80s VH riffs — but not the really influential, iconic riffs Eddie cobbled together in his prime. This is more like leftovers strung together to form a backdrop for the song’s lyrics.

Lyrically, this one reeks of Roth, featuring a lot of the incoherent babble he became fond of spouting out in the post-A Little Ain’t Enough years of his career — which hit its nadir when he started doing country covers of classic Van Halen tunes. Dave sounds like wants to break out into a scat at any moment, but Eddie probably called for a moratorium on “Boze-dee-boze-dee-bop…Diddy-bops” in the reunion contract.

Unfortunately, “Tattoo” is not a tribute to the late Herve Villechaize. It probably would have been better if it was. Instead, we get Diamond Dave’s musings on body art after watching an L.A. Ink marathon, serving up lines like:

Swap-Meet Sally
Tramp Stamp Tat
Mousewife to momshell in the time it takes
To get that new tattoo
Tattoo, tattoo…

Little secret
To make you think
Why is the crazy stuff we’d never say
Poetry in ink?

Mind you, I may have some of the words wrong as there’s no official documentation. However, Roth and Van Halen seem to be capitalizing on the trend-factor of tattoos among the perimenopausal set as a means to recapture their youth. By engaging in what was once forbidden and now considered acceptably rebellious, everyday folks can be a glamorous “rock star” by getting their own portable body art. 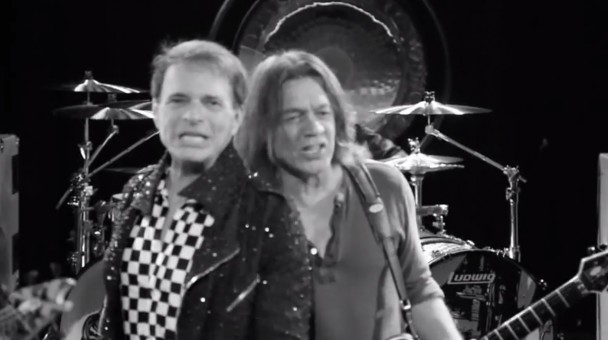 Dave shows off his snazzy Haband duds while Eddie tries not to look like Neil Young.

I’m guessing DLR doesn’t do too much shopping at Wal-Mart, otherwise, he’d rethink what he wrote. Seeing Tweety Bird tattooed on some haus frau’s cankle or a parade of poorly-executed tribal tramp stamps riding high above a cellulite-riddled ass would make anyone — even Diamond Dave — re-evaluate encouraging middle-aged chicks from getting bad body art to feel young again.

Beyond the implied visuals “Tattoo” conjures, the video’s visuals are nothing to write home about, either.  Van Halen went for the grand-daddy of unimaginative video themes: the live/not-live performance video.   I guess they wanted “Tattoo” to be kind of artsy since it’s  shot in black-and-white and occasionally flashes to a split-screen so you can observe the maximum amount of members making fools of themselves. They do a pretty good job of it, too.

Eddie Van BumFight looks like Mickey Rourke’s older, less-jacked cousin. Unlike Mickey who at least has the good sense to own his now-grizzled visage, Eddie’s making faces at the camera like he used to when he was still pretty 20 years ago.

The not-so-special effects in the beginning make it look like Diamond Dave’s lip-synch tracking is off. It also appears that Roth’s various ensembles were culled from Haband’s new Liberace-inspired line and attacked with glittery bingo markers.

Alex Van Halen mercifully gets to hide behind the drumkit for much of this one, relegated to his usual role of keeping the beat and as Eddie’s yes man. (Psst! Alex! You don’t have to do this! Eddie really isn’t your brother. You were left by gypsies!)

Wolfie also manages to stay out of view for most “Tattoo,” praying his potential prom date doesn’t see him with Pops, Uncle Alex and rock’s answer to Bob Fosse.

If “Tattoo” is an indicator of the things we can expect from this pseudo-reunified Van Halen, the only thing they may succeed in doing is laser-removing the band’s legacy.