I have a very thick skull. This can be said of me in both a literal and figurative sense. On numerous occasions, I’ve accidentally butted my boyfriend’s head with my own. It barely registered with me, but sure gave him a headache.

Consequentially, my boyfriend’s pet name for me is “The Juggernaut,” a nod to the musclebound villain of the X-Men franchise who wears an over-sized helmet and possesses the mutant ability to smash things with his fists and head. (This pet name is actually more endearing than it sounds.)

I’m not sure if having a hard head is genetic or if it’s something that has gradually built up over time. Throughout the course of my life, I’ve been hit in the head with a shit ton of objects which could lend credence to the latter theory. It could also account for why so many crazy thoughts run through my head.

Crazy Thought #4,578: Why not run down the list of items that have made contact with my head through the years and the stories behind them. Better yet, why not turn it into a four-part series!

Mind you, this four-part fiesta isn’t because I’m trying to squeeze the maximum amount of blog fodder out of a singular subject. No, Dear Reader. I’m doing this for you. I realize I’m long-winded and you, my on-the-go friend(s), want something quick, entertaining, and easy-to-digest in one sitting. We both win!

Surprisingly, I’ve never had a concussion. (Knock on wood.) That puts me ahead of half the NFL, most boxers, and a few characters on Friday Night Lights. That said, my recollection of events is still surprisingly good. Join me for a walk down Memory Lane, won’t you?

It was a chilly, Northeastern Pennsylvania winter afternoon when I found my 11-year-old self confronted by my mother, my brother, and a hefty platform boot.

I was planning on making my escape from my family’s apartment to visit a friend and classmate who was arguably one of the biggest sluts I ever met.

I had known Slut Friend since third or fourth grade, where she would regale me with tales of making out and getting felt up by dudes a good four years older than her on hayrides and trips to the mall.

The preferred cigarette of 11-year-old tarts

In hindsight, Slut Friend wasn’t really much of a friend. Ours was an Eddie Haskell/Wally Cleaver kind of friendship. There weren’t too many kids in our apartment complex at the time, so I guess I was her only option on the friend buffet table that she could brag to about her sexual conquests — at 11 years of age.

I was probably more of a patsy than a friend. Once, Slut Friend had me smuggle her cigarettes in my bra so that her mother wouldn’t find them. Then, Slut Friend would head over to my place — a couple buildings over — to retrieve them once she passed inspection. She knew her stash would be safe with me since I didn’t smoke and didn’t have any desire to.

My desperation for any sort of friend made oblivious to the fact that I was more of a nicotine mule to Slut Friend than an actual pal. My only other option for a playmate in the complex was my younger brother — and that wasn’t happening. At the time, he and I fought constantly.

He was also the biggest tattletale around.

One thing I will say about Slut Friend is that she and another girl in my grade (who was perpetually clad in spandex and long, tye-dyed sweatshirts — we’ll call her “Spandex Girl”) can be credited with turning me into a metal-head. 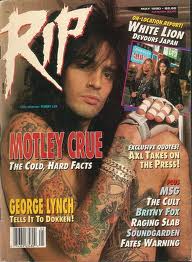 Slut Friend had a ton of pin-ups of Bon Jovi and Poison covering the walls of her room. (When she wasn’t using me as her nicotine mule, Slut Friend also used to tape money and extra cigarettes behind some of the posters in her room, too.)

Actually, it was Slut Friend’s friend, Spandex Girl, who gave me my very first metal magazine, an issue of RIP which featured an article — and centerfold! — of Motley Crue. In hindsight, maybe Spandex Girl did a better job of turning me into a metalhead and was a better friend Slut Friend. Spandex Girl was pretty damn cool.

But, I digress! It was winter. It was after school. And I was bored.

I decided to head over to Slut Friend’s house to play and listen to albums (on cassette!). Mom, rightly so, was not a fan of Slut-Friend and didn’t want me hanging out with her.

I made it as far as the front door before my brother screamed, “Mooooommmm! Lana’s going out!”

“Well, stop her!” Mom shouted from the back room, sending her little minion to thwart my plan.

My brother planted himself in front of me in the door. He was quick, but I was bigger and stronger. (At the time, I was 5 feet tall. Pretty imposing for a 5th grader. While genetics may have gifted me with a hard skull, they also played a cruel joke on me since I stopped growing at 5’1″.)

I swatted my kid brother aside like a fly and ran out into the hallway that lead outside our apartment building.

My brother, however, was tenacious! He picked himself right back up and darted in front of me, using his arms to block the doorway and buying Mom enough time to come tearing ass through our front door and yank me back into the house by my heavy winter coat.

“Let me go!” I screamed with futility. Half the apartment building must have heard me. 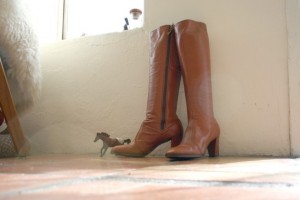 A fine boot to be clubbed in the head with

Being figuratively hard-headed, I tried to break away from Mom and my brother yet again. The Dynamic Duo had managed to bum-rush me back into my room. I was still struggling wildly to get out. Mom stood over me and my brother was now sitting on my chest in an attempt to subdue me.

On the way to my room, my brother had picked up one of Mom’s snow boots that had been drying out in the hallway.

It was a rusty-orange leather affair with a tall, stacked, platform heel — a vintage item from the ’70s and pretty snazzy, if I do say so myself.

It was a fine boot to be clubbed in the head with. 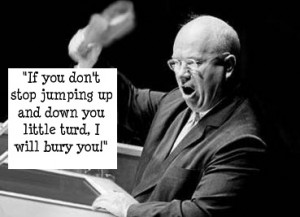 Mom had a preternatural sense of balance — and style — and wore those suckers out in the snow without ever slipping even once. Even as I flailed and thrashed like a baby seal, trying to prevent the orange onslaught from raining down upon my head, Mom kept her balance. Granted, she had an assist from my brother who pinned me down while Mom wailed me in the noggin like she was Kruschev and I was the podium.

Nevertheless, I had been beaten into submission and agreed to spend the remainder of that cold winter afternoon in my room. By the time I had ventured out for dinner with my family, everything had blown over. Such was the case with my family. You could be screaming mad at one another one minute and an hour later, everything was cool.

And I didn’t even have a headache. Not too shabby.