I make no bones about the fact that I love the hair bands of the ’80s. Yes, I know it’s cheesy and “uncool” to claim allegiance to the memory of a time when dudes used more Aqua Net in a five-year span than I will use in a lifetime.

Although I still find myself rokken to Dokken with greater frequency than most, sometimes, you can’t just turn a blind eye to some of the unintentional hilarity found in the bulk of the videos of the ’80s. Hair metal videos are a veritable goldmine of this substance.

If you absorb each frame of the ADHD-spawning jump cuts that are music video mainstays, you’ll notice some moments of unintentional hilarity captured for posterity. For every duck face a lead singer executes or every obnoxious “o”-face a guitarist makes to impress just how emotional soloing makes him, there are even more egregious displays of bands caught in the moment doing ridiculous things that the director or editor questionably decided to leave in.

Presented here are my own personal “Top Three” moments of unintentional hilarity in hair metal videos. Trust me. There are many more, but these are just three that spring to mind and are easily accessible on YouTube. Mind you, I happen to really like a lot of these songs and bands. Yet, there’s so much blatant playing to the camera in these videos that the offenders cited here make William Shatner seem understated by comparison.

That said; sit back, relax, and prepare to be horrified… Unintentionally, of course. 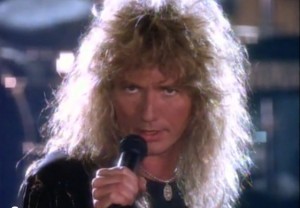 But, yonder in the distance, bassist Rudy Sarzo comes from behind for the win. Sarzo eye-fucks the lens like a champ with only a fraction of the screen time Davy Boy gets. Coverdale almost had him for a moment when, at 2:55 on the video clock, he opened up his mouth like he was going to swallow Tawny Kitaen’s head whole. Yet, Sarzo sealed the deal and came away with the hands-down most unintentionally hilarious moment of the video at 4:15 when he licks his bass guitar. It was a bold move, especially for a background player when Coverdale (and Kitaen) were the obvious focal points of this piece. Sarzo completely went for broke and instead of playing a lick on his guitar, actually LICKED it. Brilliant. 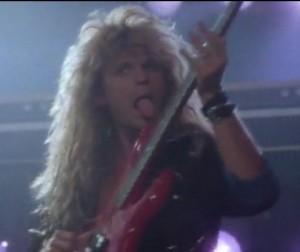 Added bonus: This video becomes even more fun when you A.) play Where’s Waldo with Tawny Kitaen’s nipples at 2:19 in the video and B.) change the pre-chorus to “Because I know what it means / When your career don’t amount / To a lowly hill of beans.”

Nearly every single one of Poison’s videos contains some unintentional hilarity, however “Every Rose Has Its Thorn” takes the cake. Unlike most of Poison’s videos which feature the same, tired, “live” performance schtick, “Every Rose” features real live footage of the band playing various shows on tour. The video itself is supposed to be poignant, showcasing the rigors and “harsh reality” of life on the road.

And that’s where the hilarity comes in.

In “Every Rose,” Poison come across like such a pack of pussies that they spend half the video trying to show how tough they are. They’re casting furtive glances at the camera while exhaling cigarette smoke at the lens. They’re smashing instruments on the stage. And Bret Michaels pitches a cup of water at a blackboard, probably because he’s pissed he has diabetes (pronounced: die-uh-bitt-uhs).

When they’re not being all rage-tastic, every member of the band gives Scarlett O’Hara a run for her money in the histrionics department. Rikki Rockett is the sole exception to this and seems pretty normal. (Considering this guy ended up finding out how Richie Kotzen tasted after getting cuckolded by his one-time fiance, that’s a pretty tall order.)

The Poison dudes are seriously dainty in the footage spliced together for “Every Rose.” C.C. DeVille gets picked up by a roadie like he should be dancing in Swan Lake and Brett Michaels opens up the video displayed on a bed like Sleeping Beauty. The pose is so obviously staged it’s laughable. Bret’s hand is pressed against his forehead like he’s just recovered from a fainting spell. Really. How many people do you know sleep like THIS unless they’re a Disney princess!? 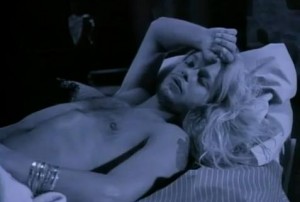 The most hilarious part of the video, however, is bassist Bobby Dall (Poison’s token black-haired member) captured completely stinking drunk at around 2:56 – 3:04 on the video clock.

Bobby Dall crawls around pathetically on the stage like he just lost a contact before the roadie has to hoist him to his feet. The Dall-ster can’t stand up straight and remains floppier than a Weekend At Bernie’s refugee while the roadie struggles with him. Even better, Bobby starts making these bizarre hand gestures as if he’d suddenly been possessed by the ghost of Harvey Fierstein’s grandmother or extending his pinky for high tea with the Queen. It’s precious: 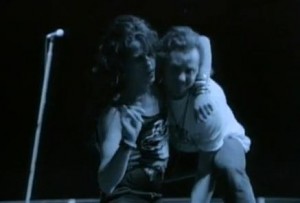 “Cherry Pie” is probably the most emblematic song of the hair metal era. It’s the song that fans of the genre can point to as a prime example of how fun and catchy hair metal can be. For detractors, it’s Exhibit A of hair metal’s shallow, sex-soaked frippery.

Unlike the other videos on this list, the video for “Cherry Pie” is meant to be funny. (Oddly enough, it’s the second video on this list that features hot model chicks who ended up marrying — and divorcing — the frontmen in the videos they appeared in.) All things considered, it’s visually appealing in its simplicity with the band appearing against a stark white backdrop, playing their instruments and acting goofy around a lot of shiny, red props that randomly pop up throughout the video.

The only failing in the “Cherry Pie” video was on the part of the director who neglected to tell Warrant that there’s a fine line between funny and embarrassing.

It looks fine when Bobbi Brown (the hot blonde who eventually became Mrs. Lane) does it in the video. Hell, it looks acceptable when a 50-year-old barfly does it when trying to get free drinks at last call, showing that cherry stem trick she learned before her tits eventually drooped on top of the bar, sopping up tears of regret and spilled Banker’s Club gin.

When Erik Turner does it, it looks just plain wrong. 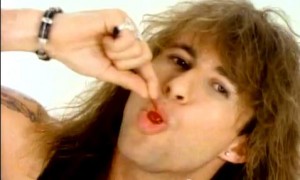 This will get you thrown out of your parents’ house. Expect to come home to all your worldly possessions strewn across the lawn if you do this.

The lone Warrant guy who “gets it” in terms of being funny is guitarist Joey Allen (the blonde dude with the obviously receding hairline that he’s trying to camouflage with bangs) who has a good deal of fun with hamming it up for the camera. (Allen totally owns at 2:04 on the clock.) He comes across like the kinda dude you would have a good time hanging out with.

In a video filled with humor of the intentional and unintentional variety, there is one moment that stands head and shoulders above the rest.

At 2:13 on the video clock, lead singer Jani Lane winds back his arm in what most students of rock n’ roll would assume will be a classic maneuver known as the “Elvis Windmill.”

You can “assume” something will happen. That something that does happen really puts the “ass” in “assume.”

Lane pitches his arm behind him with gale force, thumb up upon closer inspection. He winds his arm back 180 degrees behind him and proceeds to jam his thumb up his ass. 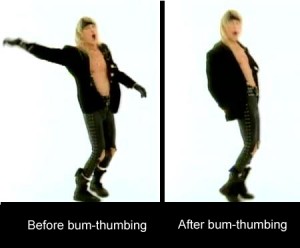 Even better, this is the portion of the song where he punctuates the prelude to the guitar solo with a loud, David Lee Roth-esque exclamation of “WOOWWWW!!!” (Which, having had a rectal exam before, is certainly the reaction you have the first time that cold, fickle finger of fate invades your leather Cheerio, let me tell ya.)

But, “Whoa-oh! Can we rewind to where we’ve been” just a bit? Jani Lane just thumbed his bum in the middle of the video for no particular reason. I mean, the title of the song is “Cherry Pie”… Not “Chocolate Cream Pie.” The dude just flailed his arm backwards and gave himself a rectal exam, right through the ol’ black spandex.

There must have been some method to Lane’s madness since Bobbi Brown ended up marrying him and she was on the set when Jani gave himself The Shocker.

Pondering this deeper, I wonder if Jani Lane thought it would be funny? (Sadly, Lane died this past year, so there’s no way to ask him what was going through his mind when he made this video. R.I.P.) Allegedly, he hated singing “Cherry Pie” live in concert, feeling that he had written much better songs than the one that became synonymous with Warrant and quite possibly the hair metal/pop metal musical genre as a whole. I wonder if that loathing of the song was actually a heaping helping of regret, remembering this was the video where he practiced amateur proctology on himself for all the world to see. (Which makes it even more odd considering he utters the words “trained professionals” shortly afterwards in the song, independent of any chorus or verse. I wonder what sort of “trained professionals” he was referring to.)

Either way, the dude gave himself a thumb in the bum. That’s pretty damn hilarious, whether it was intended to be or not.