Thanksgiving used to be a low-maintenance holiday. Now, with everyone in a mad rush to jump into an early grave, Thanksgiving has become the pre-game show to Christmas. Worse yet, many employers use the three-day Thanksgiving work week to bust the balls of employees and try to squeeze five days worth of work into three. That’s if you happen to have a job that closes for Thanksgiving and Black Friday. Some mega-corps (i.e. Wal-Mart, Target, Best Buy, Toys R’ Us, etc.) aren’t even closing the full day for Thanksgiving. Some employees are expected to wipe the gravy and cranberry sauce stains from their mouths and report to work Thanksgiving evening for an early start to the Black Friday madness.

That brings us to the real reason behind Thanksgiving: Consumption in mass quantities.

Being predisposed to cynicism, I’m not a big fan of Thanksgiving. These days, it seems that the revised meaning of Thanksgiving is cramming as many food items down your gullet in a 24 hour period with short breaks to incorporate naps, football, and (now) shopping — or some permutation of the three if you happen to be particularly ambitious.

Sometimes, folks pause just long enough to contemplate the positives in their lives and manage to wax Hallmark poetic for a spell before running to the local mega-store and dueling to the death over the last $15 DVD player.

All hijinx aside, Thanksgiving offers very few surprises. The menu usually sticks to the same traditional fare and looks a little something like this: 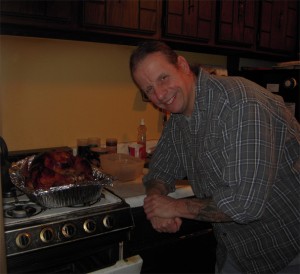 My boyfriend in his commemorative 2010 Turkey “Before” snapshot

Some people are rabid turkey fans. Not fans of rabid turkeys, per se (which could really liven things up), but just enthusiastic poultry connoisseurs. My boyfriend happens to be one of these people. He takes pride in the hours it takes to cook the bird and the end result, which usually has a crispy, blackened skin. Every year, I have to take a commemorative photo of him with his turkey before and after he carves into it.

Personally, I don’t see the allure of turkey. It’s a lot of work with little reward. Even the best turkey is kind of dry and flavorless. I won’t even begin to touch the horrifying new trend known as “terducken” — which is basically The Human Centipede of food: stuffing a turkey with a duck that’s stuffed with a chicken. Ugh. No thanks.

You can’t have sex with this turkey.

Screw the turkey! (Not literally. Although, my boyfriend remarked the other day how most turkeys look fake and plastic — and that his turkey is the type of turkey you could have sex with. I’m going to assume he was going for a Mae West-ian “A model is just an imitation of the real thing” analogy and doesn’t have any nefarious plans for “stuffing” the turkey.) For me and quite a few other people, stuffing is the real star of the meal!

Stuffing — in its myriad of forms and flavors — is really hard to screw up and gives you some nice options to play with. You could make a hearty oyster stuffing or a pineapple desert stuffing. Even a simple cornbread or vegetable stuffing is pretty damn awesome. My personal favorite is a spicy apple-sausage bread stuffing. Even though I adapted to a pescatarian diet these past few months, I’m going back on the meat wagon (Heh. I said “meat wagon.”) and plan on cramming a bucket of this stuff into my gob for as long as the leftovers last. Stuffing is just that damn good.

You can, however, have sex with THIS turkey.

Mashed potatoes are hit or miss. Sometimes, you get stuck with the instant variety that taste like cardboard. Other times, you get the real deal that are full of flavor and have a nice, creamy texture. Some people get fancy with their taters and go for garlic or cheese. This works, too. In some unfortunate instances, there are folks who have deluded themselves that their mashed potatoes are masterpieces but are much closer in taste and consistency to glue.

In all cases, even the most palatable mashed potatoes can be made even better with the addition of gravy. Even a shitty canned gravy can make things a bit better. A homemade gravy can be good, but why risk it? Go to Boston Market or Popeye’s the day before Thanksgiving and see if they’ll hook you up with a mini-vat of the good shit to go. (HINT: Sometimes, if you flirt with the dude behind the counter, they’ll throw in some extra cornbread for free. It’s good to snack on while you’re slaving over a hot stove the day before Thanksgiving!)

I’m lumping some of the more popular Thanksgiving casseroles like Green Bean Casserole and marshmallow-studded Sweet Potato Casserole together here. They can be equally good — or equally bad — depending on how they’re prepared. While a good Green Bean or Sweet Potato Casserole can be just as good as stuffing, it lacks the “you can’t fuck this up”-ability of stuffing. It’s very possible to screw up a casserole by making it too mushy. Wilted yams drowning in a sea of candied sauce to the point that they taste like sugary wads of wet toilet paper. French fried onions devoid of all crunch having sat in their sad pool of mushroom soup for far too long. It can be a pretty dismal affair if casseroles are overdone. 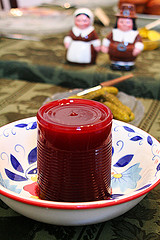 The only acceptable cranberry sauce is sauce that comes from the can. It can be generic or brand name. It doesn’t really matter. It’s when you start getting fancy with putting in real cranberries that things can go horribly wrong. Don’t get all snobby with your palate. Suck down that cranberry sauce as God intended it to be: shaped like a can.

Who the hell don’t love pie?! Whether it’s store bought or homemade, you can’t lose with pie. I like to mix it up with some store bought varieties and then make two homemade Pumpkin Pecan pies — one of which my boyfriend traditionally consumes in its entirety straight from the tin before the conclusion of the Macy’s Thanksgiving Day Parade. It’s one of those efforts that I don’t see much of a return on. (I probably get to consume 1/4 of the second pie compared to his one-and-three-quarter pie ratio.) But hey, he sucks it up and goes to his contractually obligated haunted hayride at Halloween (my holiday), so baking pies for him to eat in one sitting on Thanksgiving (his holiday) is the least I can do.

On one hand, if you happen to like Thanksgiving food, knowing what you have to look forward to is great. On the other hand, if you don’t like Thanksgiving food, you’re screwed. You either have to cook for invading relatives demanding traditional Thanksgiving food like bar patrons screaming for the local cover band to play “Freebird”… or, you have to get up early and plan to invade the home of a relative, praying the whole ride that your host has managed to put forth edible versions of turkey and all the trimmings.

How good or how awful your host’s offerings may be determines how much of an acting job you will have to put on while finishing a compulsory helping of each item before the tryptophan kicks in. 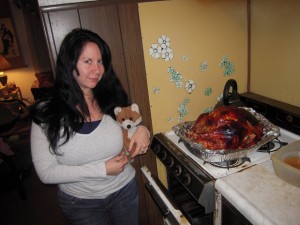 Thankful for “That ’70s Kitchen”

If you’re a vegan or vegetarian, Thanksgiving becomes even more of an uncomfortable situation. You can count on having to explain your dietary preferences and/or moral objections to portions of the meal (depending on your reasons for shunning meat and/or eggs and dairy). If you fall into any of these categories, the positive side is you’ve just gotten yourself out of having to hack into a dry bird like the rest of those poor saps. Awesome! However, at least one or two relatives will give you the hairy eyeball for having pulled a Thanksgiving “Get Out of Jail Free” card if the food sucks.

When I was a kid, we never had turkey for Thanksgiving. Mom was one of those rare folks who would switch up the Thanksgiving menu. Sometimes it’d be Cornish Hens, other times lasagna. You never knew what you would get at the Cooper house. I didn’t appreciate that sort of wild unpredictability until I got older and found myself surrounded by folks who adhered to the mantra that “It’s just not Thanksgiving without the turkey.”

For years, I would ask my mother, “Why can’t we have a turkey for Thanksgiving like everyone else!?”

She would always reply: “Because I cook the dinner and I hate turkey. It’s dry, it’s disgusting and it takes all damn day to make.”

Now I see the wisdom of Mom’s words. Actually, I find myself turning into my mother more and more as the years pass. Particularly when it comes to turkey.

Let’s face it. Thanksgiving isn’t about gratitude. It’s about effort. Expending hours of effort on a dinner that lasts a fraction of the time to eat than it takes to make. Chances are, the stuff you’ll end up with as leftovers is probably the stuff nobody wanted, leaving you to try to get creative with leftover turkey or other items in the days ahead.

And that level of food creativity equals more effort.

My advice is to take the day for what it’s worth: A long weekend (if you don’t work for a douchebag company) and an opportunity to come away with some mildly amusing stories to pass down about how awful Uncle Jimmy and Aunt Sally’s cooking was, or — if you’re lucky — a fond memory or two to share.