September 2nd, 2011 marked the last day that Philadelphia’s 94.1 WYSP was “The Rock Station.” Recently, an article in the Philadelphia Business Journal announced that Philly’s AM band sports talk radio station, 610 WIP, would be taking over the 94.1 FM frequency. The takeover would be an effort to compete with Philly’s other dual-band sports radio station, 97.5 FM The Fanatic (which is virtually a simulcast of the AM band’s 950 ESPN frequency).

That’s just peachy. Just what Philly needs: More sports talk radio to encourage the Big Fan Patton Oswalt stereotype this town has become known for. Moreover, CBS Radio just put more people out of jobs by putting one station on two frequencies, all in the name of ratings — or desperately trying to boost them.

Although Philly has two rock-oriented ratio stations on its FM dial (93.3 WMMR, which plays a mix of current and classic rock; and 102.9 WMGK, devoted solely to classic rock), it’s sad to see a station with a history like WYSP’s go. At one time, the channel was host to Howard Stern’s syndicated radio show before he (wisely) made the jump to Sirius in 2006. When Stern made his move, a good chunk of the station’s ratings went with him as they desperately tried to plug in more talk radio into their formula. While Danny Bonaduce gave the station a successful (and local!) morning talk show format , other drive-time DJs came up a big bust.

As sad as WYSP’s decline has been, it hasn’t been completely unexpected nor anything a lot of other radio stations haven’t faced in recent years. Most rock radio stations seem as if they haven’t updated their playlists since the late ’90s. When the “newest” band you hear thrown into the mix is Nickelback, it’s time to re-evaluate what you’re throwing up onto the airwaves.

It’s a rarity to hear any new songs on the radio by newer bands — or even older bands or artists. All you hear are the same five Led Zeppelin tunes (none of Robert Plant’s new Band of Joy material); a mixed bag of grunge hits which rarely deviates from Nirvana’s “Smells Like Teen Spirit,” Pearl Jam’s “Jeremy,” and your choice of one other mid-’90s single by the Red Hot Chilli Peppers, Stone Temple Pilots, or Soundgarden; and a similar mixed bag of ’80s hits which usually includes Motley Crue’s “Dr. Feelgood,” Def Leppard’s “Pour Some Sugar On Me,” and Guns N’ Roses’ “Welcome to the Jungle.” While these songs are indicative of these bands’ best work, a little variety or imagination thrown into the playlist wouldn’t kill the programmers.

Instead it killed radio. 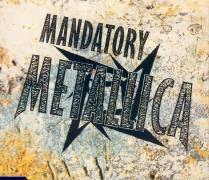 One of the worst things to happen to rock radio

Throw in that staple of rock radio, Mandatory Metallica — dedicating at least an hour of programming to slobbing the knob of a band whose best days are at least 15 years behind them — and it’s one more exhibit of the innovation sorely lacking in rock radio today. Just set that sucker on autopilot for an hour once or more per week and don’t worry about getting creative.

The problem with rock radio today is its utter lack of creativity. The Payola scandal of the 1950s gradually robbed many DJs of the right choose their own playlists for fear that they were unethically taking cash to put certain songs into heavy rotation on station playlists. Throughout the ’70s, DJs still held some dominion over what got on-air, but that stopped as soon as the corporate mentality began permeating radio stations across the country.

The current method of creating radio station playlists is still subject to Payola, only the cash is put in different hands. According to the current model, DJs now only have one or two free slots — provided they’ve already played the approved on-air material — to throw in some song they love or a new band they’ve discovered.

Commercial radio has reduced the DJ to being just a warm body in a booth, cranking the volume and changing discs on a playlist of tired songs without room for anything new — or anything old that may hold artistic merit — that isn’t on some out-of-touch suit’s approved list of songs. This is who decides what makes the cut on rock radio. And this is part of the reason why commercial rock radio sucks a fat one.

There is no risk to be taken when it concerns those all-important Arbitron ratings. Any risk has been even further eliminated by switching to automated formats, taking out the need for that “warm body in the booth.” The bean-counters and their demand for dough and double-digit market share have superseded the vox populi of the request line — a radio tradition that has found itself heavily moderated or nearly phased out altogether.

This trend towards homogenization accounts for why a radio station in rural Montana will have the same playlist as one in metropolitan New York City. There is no taking into consideration for local flavor, giving local bands a chance, or even giving unsigned bands a platform on commercial radio — even just a small corner. Instead, you hear the same thing across the country.

This is why countless radio stations are consolidating and/or simulcasting. Rather than re-evaluate what is wrong with the current model and take a risk to revamp it and make it better by giving more creative freedom to DJs and others with a genuine love for music, it’s much easier to take the safe route and cut corners, cut jobs, and cut the level of originality to a stale format that the bean counters feel is safe for profit margins.

In turn, many bands and record companies also follow a formula, hoping to expand their chances of having a single picked up. In the wake of American Idol and other televised contests to pick a new flash-in-the-pan puppet that record companies can trot out to the slaughter and make a fast buck off of until they reach their expiration date, A&R reps no longer have to pound the pavement looking for new talent. You don’t see record label reps hanging out in clubs or keeping an ear to the ground for new talent that people are excited about.

Instead, television does the work for them.

Younger bands without an experienced PR machine at their beck and call and lacking in business/social networking savvy run the risk of getting lost in the shuffle. Then again, considering the way the music industry treats bands signed to labels in this day and age of the Faustian 360 Deal, younger bands and artists probably fare better taking their fate into their own hands rather than placing it in the hands of the record companies.

And of the newer bands on major labels or smaller nationally distributed labels, there is a definite sense of homogenization. Instead of scouting for “the next big thing,” there is an oversaturation of sound-alike bands that milk many a rock subgenre until nothing but formula remains, right down to a band’s image. One look at all of the newer rock bands sporting requisite sleeves of shitty tattoos and side-swooped haircuts that would make Donald Trump envious is enough to make even the biggest proponent of rock music want to throw in the towel. You may as well empty out the spit bucket, too, once you hear the paint-by-numbers format of many newer metal songs: “Blah-angry-blah-scream-rant-scream” precedes “This is the melodic chorus that we sing in one-part harmony before the angry-blah-screaming starts up again.”

Yeah. I’m beginning to understand why radio DJs end up sticking with the classics. At least they have proven longevity.

The underlying problem plaguing the radio and recording industries is that no one is willing to take a chance on anything new. Rather than fostering talent and watching it grow, the industry cannibalizes it once a new trend has emerged and they want to dispose of the evidence. Instead of a label picking up a band that brings something new to the table, they will look and see what the other labels are pimping and find something as close to the other labels’ emerging talent to have a competing “product” to toss out there, rather than looking at overall quality. In turn, the airwaves become saturated with mediocre, sound-alike bands. 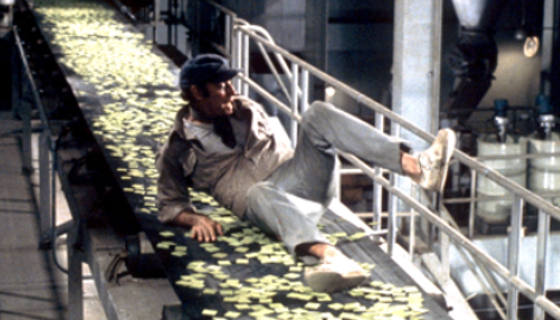 Soylent Green: An assembly-line proccess & made from people… Just like the radio/recording industry!

Not only have radio and major labels become the Soylent Green of music, they have also become dinosaurs responsible for their own impending extinction. Laziness and number-crunching is killing radio and the music industry, sucking it dry of any creativity. All the art has been artfully removed by viewing music as a “product” rather than allowing it to evolve organically or for listeners to decide for themselves what they want to hear.

Thankfully, the internet exists, allowing people to hear what truly speaks to them, so long as they’re willing to seek it out. Music fans have become their own A&R reps, promoting their favorite bands online. There are also a few internet radio stations willing to lead the charge and help bands promote their music with little desire to turn a profit.

The days of a band starting out hoping to gain mass appeal or a career that will allow them to ditch that day job and play music full-time are gone. It’s a labor of love, in many cases for artists who just want to be heard and online or satellite radio (which is slowly starting to see homogenization creep in) disc jockeys who want to ensure there is some variety on the airwaves, rather than some unwieldy behemoth dictating what music and art has “mass appeal,” rather than local or personal appeal.

It’s a shame that future generations will never be able to get up in the middle of the night and turn on free radio to listen to a DJ based out of their own home town who they can rely on to drop some new candy in their ears. They won’t know that someone else out there — maybe less than a mile away — is up at that same hour, picking out a bunch of songs for other night owls to hear. Sure, they can turn on their satellite radio or internet radio and listen to music being broadcast from thousands of miles away, put into an automated rotation; but they won’t know the simple joy of calling into the station to talk to the DJ and requesting a song they really want to hear and maybe even hearing themselves on-air requesting it.

Is this really progress or just dehumanization?