There are a disturbing amount of people who need a costume to ride a bike. If you’re training for the Tour De France, I understand that it may be important to put on your little shorts and bright yellow Under Armour as you veer into traffic with total disregard for the rules of the road. However, unless you are Lance Armstrong, there is no reason for you to cram into a pair of nut huggers with little patches on your recreational afternoon bike ride. It’s not Halloween, chief.

Then, there are those people who make it a point to tell you they are going to the gym. You’ll be at work and they’ll start talking about their post-5pm agenda: “I have to go to the gym after work. I feel like shit if I don’t work out.”  Terrific! I admire your dedication to physical fitness. Less than a minute later, that person will reiterate just how how essential their gym time is to their very existence: “I feel like I can’t breathe if I don’t get to the gym.” (I actually overheard someone say this once. I wanted to hurt myself — and them.) 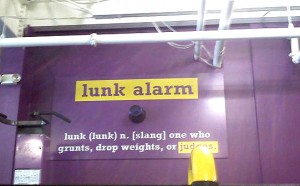 Planet Fitness’ “Lunk Alarm”: You’ve GOT to be kidding me.

Instead, Planet Fitness and other chains should have an alarm for obnoxious patrons trying to use the gym as a pick-up joint, making it very uncomfortable for people who are there to actually exercise. Chances are, the guy who is super jacked didn’t get that way because he was mackin’ on the honeys. I’d rather share a gym with that guy than a cadre of cretins who train the “glamour muscles” and admire how their Tap Out shirt accentuates their doucheness — or the chick who hops daintily on the treadmill in pastel spandex, lifting two-pound barbells and staring vacantly around the gym, looking for someone to notice how cute she looks and strike up a 20 minute conversation as a line forms to use the equipment.

People like this are the reason that I choose to exercise at home. Barring the odd day where I want to read, write, or shove my face into a trough of Ben & Jerry’s, I generally don’t mind training. I don’t LOVE it…but (most days) I like it.

I’ll be the first to admit that vanity plays a big role in my reason for working out. I’m short (5’1″) and without regular physical activity, I have the tendency to look like a dorm room refrigerator if I spend too much time with Ben, Jerry, and Ronald McDonald.

I also like working out to increase strength. I’m a bit stronger than your average girl and enjoy lifting heavy weights. There’s a bit of a rush knowing you can take care of yourself or beat most of the guys in a push-up contest.

Weight training is my primary focus, but I throw in some cardio, too. I switch it up with a mix of Zumba, Carmen Electra’s Aerobic Striptease DVDs (there’s nothing quite like slapping your own ass in the privacy of your living room) or the Gazelle, as shamelessly hawked by Tony Little and his magnificent ponytail-and-baseball-cap combo.

To keep me motivated during my workouts, I need to listen to music. I’ve put together several iPod playlists to get me moving — a nice mix of upbeat dance/pop music for cardio and and angry metal for lifting.  Sometimes, I just forgo the playlists and set my iPod to “shuffle” and see what moves me from there.

Through the magic of “the shuffle,” I’ve discovered that the most unusual songs can get me amped to pump some iron. For instance, sometimes I like doing my routine to a mix of New Edition members’ solo projects. There’s nothing quite like doing squats to Bobby Brown’s “My Prerogative” or curls to Johnny Gill’s “Rub You the Right Way.”

One weekend afternoon, I was on the phone with my brother (who, along with my sister-in-law, is a professional dancer and licensed Zumba instructor. Yeah, I know. Shameless plug for the family). 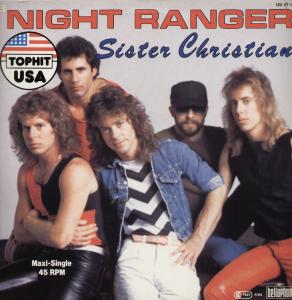 Apparently, it’s not okay to work out to Night Ranger… Even if you scream out “Motor in!” after each rep.

“Man!” I said. “I was on fire pumping out the incline reps yesterday! I just put on my headphones and started cranking “Sentimental Street” and totally kicked my own ass.”

For one, brief shining moment, my choice of workout music was validated.

Then it came to a screeching halt.

“What the hell did you just say?” asked my boyfriend.

“Dude,” I said to him. “I was lifting to Night Ranger’s ‘Sentimental Street’ and it was really kick ass.”

He looked at me with utter disgust. “No. You do not work out to ‘Sentimental Street’ and you definitely DO NOT work out to Bobby Brown.”

Screw Planet Fitness. My own apartment isn’t even a “No Judgement Zone.” Apparently, there’s something wrong with me getting my swell on to Night Ranger’s lesser-known power ballad. (I was also informed that it would be equally unacceptable to pump iron to “Sister Christian,” too — even if I did scream out “Motor in!” at the end of every set.) Much like Pee Wee Herman, when confronted with the knowledge that he had unwittingly infiltrated the private club of the Satan’s Helper’s motorcycle gang, “No one hepped me to that, dude.”

“What’s he complaining about?” my brother asked from the other end of the receiver.

“He thinks my choice in workout music sucks,” I replied.

“Dude! That’s bullshit! I work out to Bobby Brown all the time!”

“See,” I said, raising an eyebrow at my boyfriend.

“Why don’t you two clowns listen to some real music when you’re training.” (It was more of an imperative than an interrogative.)

To put this in context, my boyfriend goes to a no-frills, hardcore lifting gym and is one of those rare souls who enjoys working out with zero vanity behind it. If he has an injury, he works through it or works around it.  He’s also something of a musical elitist and workout purist who doesn’t need no stinkin’ MP3 player to get him jazzed for a good clean and jerk.  His workout ethic is quite admirable and simultaneously maddening, at times.

“Really, chief?” I said smarmily, my eyebrow in a near-permanent state of raise. “Alright. Please educate me as to what is the ‘correct’ music to listen to when working out. I didn’t realize that there was a universal standard.”

He ran down an acceptable list of bands to listen to while pumping iron, which included:

That was pretty much about it.

“What about Slipknot?” I inquired.

“I’ve never listened to a Slipknot song before. I don’t know.”

“Did you ever hear KISS’ Revenge album? ‘Unholy’ is a great song to lift to. So is ‘War Machine’.”

He never heard Revenge but conceded to “War Machine,” as it used to be ECW wrestler Tazz’s ring entrance song.

Petitioning for one of my favorite bands, I asked him where he stood on Motley Crue.

Suddenly, it became obvious as to why I am in charge of making mixed CDs for any long road trips with my boyfriend.

I decided to press the issue further. “So, why is it wrong to work out to Bobby Brown?”

“No it’s not. I’ve never smoked pot. Ever… You just don’t understand The Doors and you never will.”

“Dude,” I continued. “The Doors is stoner rock and everyone knows it. I don’t see how you can Hulk out to ‘Light My Fire’, if you’re going to sit there and say ‘My Prerogative’ won’t get you gassed.”

“I’m not telling you what you can and can’t do. All I’m saying is that I don’t see how that can get you motivated.”

There was no way I was going to win this argument. It was completely subjective.

Ultimately, you are the one working out for whatever reason you are doing it for. Whatever music or motivation gets your ass up and off that couch is solely up to you. If Elton John or Bobby Brown make you want to do bent over rows until the cows come home, then that’s just as valid a choice as cranking out military presses to Metallica’s “Enter Sandman.” Personally, I think there’s room for a little bit of both on everyone’s iPod.