For years, I counted rock stars among my personal heroes right up there with Mae West, Tupac,  Larry Flynt, and my parents. The term “rock star,” before it had been co-opted by the general public, roped in against its will into that awful chasm of cliché, “party like a rock star,” used to stand for someone who was brilliant within their chosen career path, played by their own rules and made their own rules which they adhered to with unflinching integrity (regardless of any questionable moral constraints).

Rock n’ roll is now a cliché. It used to stand for rebellion and a dubious set of ideals. Now, it stands for formula and conformity. Take a look at the requisite sleeves of cheesy tattoos and hair plastered to one side of any given band dude’s face. Good luck trying telling one band apart from another. Go ahead and name me one member of a rock band in the past 10 years wh 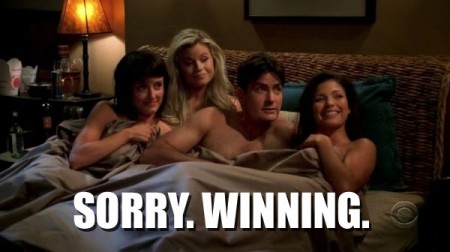 o has emerged as a culturally recognized entity. You probably can’t because most rock bands are relatively interchangeable. And the ones who have withstood the test of time have fallen prey to the dark, concert-promoting overlords whose Sauron-like eye peers over amphitheaters nationwide, dooming themselves to a life of over-touring and nauseating market saturation to pay back those massive “360 deals.” Having sold your soul to the (record) company store isn’t very “rock n’ roll.”

Moreover, the guy is a walking sound byte. I used to pump my fist in the air at concerts. Now, I did the ol’ air-punch when I had read (and later watched) Sheen’s interview where he said “O.D.-ing is for amateurs” and that his level of partying makes Frank Sinatra, Keith Richards and Mick Jagger look like “droopy-eyed, armless children.” Okay, so maybe those statements are awesomely arrogant, however, I applaud Charlie Sheen for being the genuine article. He’s speaking his own truth. It may not be the absolute truth, but he’s not afraid to speak his mind. I, for one, celebrate this movement. 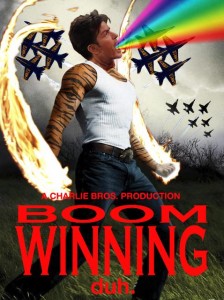 The general public is strongly divided on him. While some find him obnoxious, others love him, particularly for calling out hypocrites. Of course, this has led to detractors decrying his drug use (hey, the guy took a piss test on television and came up clean!) and label him bipolar. Again, pointing out the hypocrisy of this, Sheen notes the “cure” for bipolar disorder is prescription drugs, a legal version of what people have condemned him for taking. Look at the prescription drug problem running rampant and it’s clear that casual prescribing of legal drugs yields just as bad — if not worse — of an addiction rate than street drugs.

It’s not so much the fabulous bacchanal of a bender that people are coming down on, though. Hell, Lindsay Lohan has gotten away with much worse than Charlie Sheen. I think people take issue with the fact that the guy says what he is thinking without filtering it. That is the ultimate cultural taboo: Not suppressing your feelings. We’re taught to hold our tongues and bite back our words (usually after taking a nice fistful of Xanies to make any of those uncomfortable human urges go away). Sheen himself has said, “I don’t think people are ready for the message I’m delivering.” Yeah. They’re probably not. Somehow, being a straight-shooter is grounds for lumping you into the “heap load of crazy” category and speaking your mind must mean that there’s something “wrong” with you. Granted, Charlie Sheen, reeling in $2 million per episode of Two and a Half Men has more of a luxury than most people to say what he wants. He’s able to have more of a forum than most, but it doesn’t mean his bosses like it.  They would probably love to see Sheen’s streak of WINNING! come to an end.

On top of that, while there are a ton of people who want to high five Sheen for having two live-in blonde “goddesses” under his roof, there are just as many haters who don’t like the fact that the guy is having a good time. Of course, less than 24 hours after Sheen’s interview aired on ABC, his twin sons were taken away from him, despite the fact that he did not test positive for drugs. Of course! Sheen is vilified, but how come no one had questioned why he was awarded custody of his kids in the first place? Sheen’s ex-wife’s stint in rehab has been conveniently glossed over with the main focus being on Charlie’s rock star lifestyle. 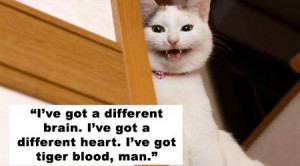 Personally, I find Charlie Sheen to be an inspiration. Some may call him a loose cannon or bipolar (Actually, he’s “bi-winning”: He wins here. He wins there. Bi-Winning, baby!). I admire the guy for his complete lack of pretense. He refuses to be used, which is a hallmark of a winner. How many times have we all come up with a losing hand, looking back in 20/20 hindsight only to say: “Damn, I didn’t take care of myself. Again.”? Charlie Sheen pisses on that sentiment with pride because he’s just cut through all of the bullshit. He’s said, “I don’t live in the middle anymore. That’s where you get embarrassed in front of the prom queen.” And he’s right. When you refuse to stand on either side of the line, you look like a chump. Sheen has crossed over to the side of the line we’re supposed to stay away from and realized that this is what works best for him. He’s gone on record saying that he’s 45 years old, has five kids and is tired of getting dumped on. You can only sit there and have someone pour shit on your head for so long before you either drown, or wake up and smack that pitcher of poo out of the person’s hand and break the cycle.

He has a high opinion of himself and doesn’t allow any outside factors to decimate his own self-worth. That’s a winning philosophy we’d all be a lot better off adopting. Maybe there’s a little bit of “tiger blood” in all of us, we just haven’t realized it yet. Rock n’ roll may have let me down, but I think I may have found a new hero in Charlie Sheen.