Weirdness and celebrities go hand in hand.  Which is why it seems even weirder when you slap a celeb’s picture on the packaging of edible goods.  For some unexplained reason, I happen to get a big kick out of seeing a star’s picture on something so “ordinary” as food.  Some celebrities you look at and can scarcely believe they eat, let alone would lend their likeness to something fit for human consumption.

While I have yet to see Tom Cruise Zeton Bites Intergalactic Snacks, Lindsey Lohan Crack Drops or Madonna-flavored Whore-eos, over the years, I’ve peeped a few interesting items on my food shopping excursions. Considering that I tend to attract weirdness (probably due in part to my own weirdness) and consider myself a pop culture junkie, I have a small collection of celebrity-themed food oddities taking up residence in my pantry. Here are a few of the items in my collection for your enjoyment and entertainment.

Exhibit A: Box of Bret “The Hitman” Hart Cereal 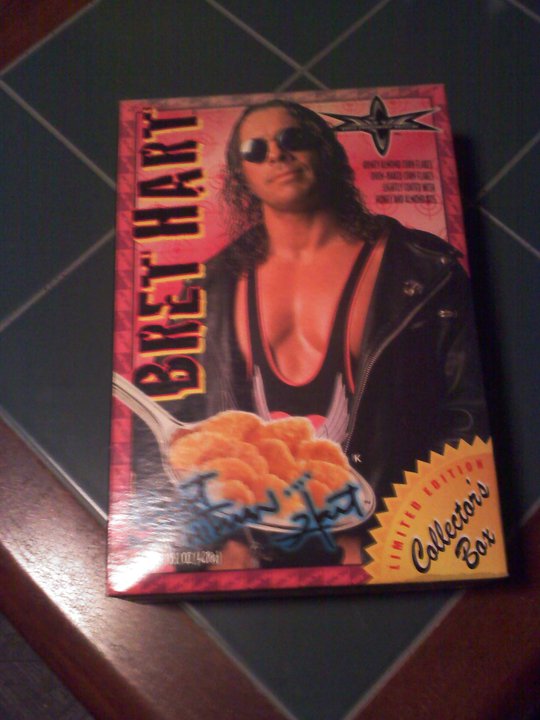 At this rate, the box probably tastes better than its contents.

I used to be a huge wrestling fan.  I would watch it religiously every Monday night for hours on end.  It’s been a solid two years since I’ve watched wrestling with any sort of regularity.  In its present state, professional wrestling is almost as fun as watching a corpse putrify.  (Only putrifaction stinks a lot less.)

Speaking of things that probably aren’t pretty good, right around now would be a good time to unveil a celebrity-themed food relic I have lingering around my kitchen: my box of Bret “The Hitman” Hart cereal.

Once known as “the Excellence of Execution,”  Bret Hart was the scion of legendary wrestler Stu Hart.  The elder Hart was a legend in his own right and also trained countless Canadian wrestlers in his Calgary school ominously known as “The Dungeon.”

Through the years, a lot of bad things befell the Hart family.  Most of these bad things stemmed from the world of professional wrestling itself.  Alas, pro wrestling didn’t seem to love the Harts back as much as they loved their craft.  Nevertheless, Bret Hart retired from active ring duty a few years before suffering a stroke.  After making a full recovery, he decided to step back into the ring for some strange reason that could only be explained by a hefty paycheck.

Nevertheless, Bret Hart is still widely revered as one of the greatest professional wrestlers of all time.  Unlike his WWE cohort, “Stone Cold” Steve Austin, Hart never found his way onto a box of Wheaties.  He did, however, get his own pink-and-black box of cereal bearing his name which I promptly scooped up off of the shelves years ago to add to my collection of wrestling memorabilia. I never opened the box to try Bret Hart’s cereal (lest it decline in value, as I believed at the time) so I can’t say for sure whether it was “the best there is, the best there was, or the best there ever will be” as far as tasty breakfast offerings are concerned.  However, after hanging out in my kitchen unopened for the better part of a decade, I’d wager that the box probably tastes better at this point. 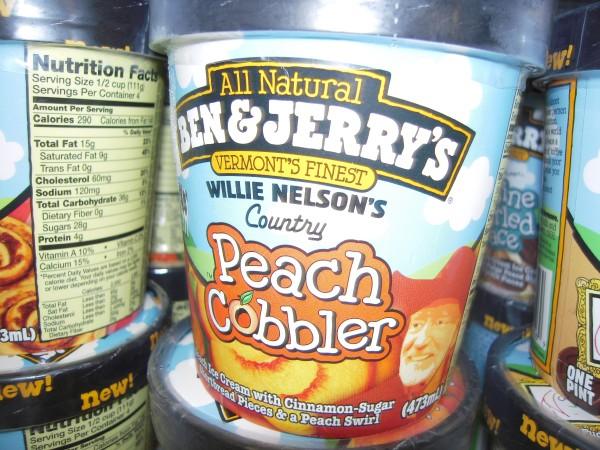 Willie isn’t the first celebrity to appear on a pint of Ben & Jerry’s.  Stephen Colbert and Jerry Garcia have each appeared on the packaging for ice cream flavors named for them.  When I saw Willie hanging out in my grocer’s freezer, I found myself getting significantly more excited than I did seeing either Cobert or the deceased Grateful Dead frontman on ice.  (Insert your own Walt Disney “on ice” reference here in regards to the latter.) Maybe it was because both Colbert and Garcia’s flavors were a bit more traditional that I didn’t get all that stoked about their Ben & Jerry endorsement.  By contrast, Willie’s flavor was something out of the ordinary, a creamy peach ice cream with peaches and rich, cinnamon-sugar shortbread cookies crumbled up and swirled throughout. 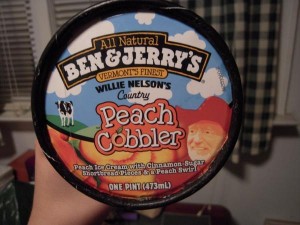 Willie’s got your cure for the munchies!

Or maybe it was because I was kind of stoked to see Willie being his rebel self and hiding out from the IRS in the ice cream section of the freezer.  It was good to know that the Redheaded Stranger and clean fuel-proponent would be collecting a paycheck for allowing his face to grace a container of ecologically sound ice cream.  And knowing that Willie is rather friendly towards “green living” of an entirely different sort, it’s kind of comforting to see his mug on a pint of ice cream you can plow through after a round with the munchies.

The latest piece to join my collection of celebrity-themed food oddities came on my most recent jaunt to Rite Aid.  I practically live at Rite Aid and frequently find a lot of decent bargains while roaming its aisles.  In the past couple months, they’ve been stocking this awesome, generic brand of boxed cake mix and canisters of icing in various flavors for just $1.00 a piece.  What’s not to love?! (And don’t judge dollar-box cake mix until you try it.  Truthfully, this stuff whips up with a lot less lumps than Betty Crocker or Dunkin Hines in the batter before baking and tastes just as good, if not better.) 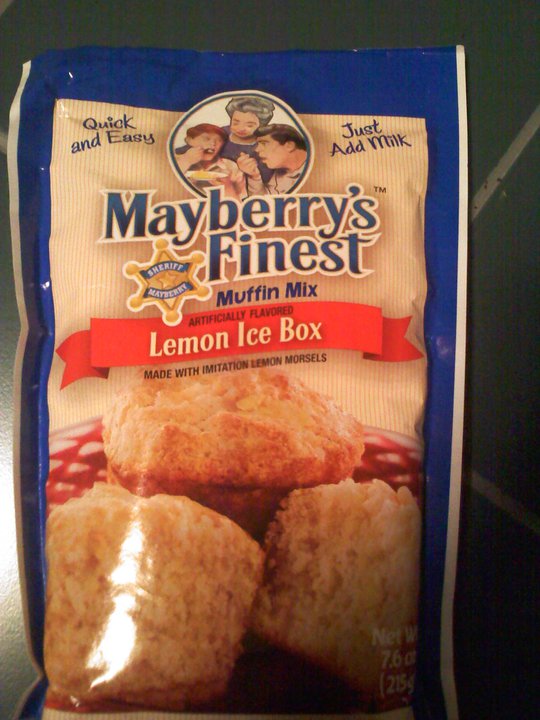 Admittedly, I can be a completely lazy shit at times.  This was one of them. I didn’t feel like going through the additional step of icing my box-baked cupcakes in the imminent future, so I decided to pick up a dollar box of muffin mix instead of cake.  (In terms of icing, cupcakes are about all I can handle.  In the past, my attempts at icing a cake have been woeful, looking more like a pack of rabid dogs sprayed the cake with their mad foamings rather than a smooth, application of frosting.  And forget about trying to “decorate” a cake with words or other flourishes…Oh, it’s bad.)

It wasn’t until I got home and took a peek at the packaging that I realized I had picked up some of Mayberry’s Finest muffins.  Having logged a disturbing amount of hours watching classic television shows, the name “Mayberry” rung a bell. I brushed it was a mere coincidence.  Yet, sure enough, glancing at the top of the packaging, there were Opie and his pops, Andy Taylor, huddled around Aunt Bea and enjoying a heaping helping (D’oh! Wrong show!) of her home-cooked delights. Bearing The Andy Griffith Show seal of approval, the package of muffin mix came emblazoned with its own little sheriff’s badge marking it as “Mayberry’s Finest.”

I have yet to rip into the muffin mix and bake up a batch à la Aunt Bea, but I have no doubt that with Opie, Andy and his spinster homemaker aunt’s ringing endorsement, these Lemon Ice Box Muffins will not disappoint.  (And for the record, I fully intend on saving the empty packaging afterwards.)