You used to be one of my favorite actors.  What the hell happened?

No.  Seriously.  What the hell happened?  You used to epitomize suave sophistication on the silver screen, even under the most debaucherous of circumstances.  In your iconic, Oscar-winning performance as Hannibal Lecter, you elevated the horror genre above mere plebian status, proving with your portrayal that horror could be both intellectual and visceral at the same time.  Yes, I even loved you in your early role as a psychotic ventriloquist who was just a tad too attached to his little wooden boy in “Magic.” Even when your character offed Burgess Meredith (which, even in a horror film is nearly unforgivable), I overlooked it because, well, you were Anthony Hopkins and you were awesome. 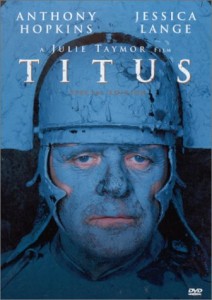 As the title character in Titus, director Julie Taymor’s adaptation of Shakesperean staple, Titus Andronicus, you exhibited a sort of grace and nobility in grief, madness, and revenge — seamlessly moving from each stage to the next and perfectly defining the character.

You emitted an aura of tragic gentility in The Remains of the Day, as well as the sorely underrated Hearts in Atlantis as a kindly psychic/telekinetic on the lam and as (one of my favorite authors), C.S. Lewis in the beautiful (and equally underrated) biopic, Shadowlands.

It was your performances in each of these films that solidified you as one of those rare actors who actually deserves praise and acclaim.

Until recently, that is.

Lately, Sir Anthony, I’ve been pretty disappointed with your Johnny One Note performances.  Whereas in the past, you took on a greater variety of roles that stretched your substantial acting talents, as of late you’ve been playing these creepy, horny old goats.  Yeah, yeah.  I know Hannibal Lecter put you on the map as something of a twisted, upper-end-of-middle-aged sex symbol who knew exactly what sort of wine would go with such epicurean fare as freshly sauteed human brains, branding him as dangerously suave enough to sweep a fiesty Julianne Moore (taking over for Jodie Foster as Agent Clarice Starling) off her feet. I get that.

However, the roles you’ve been choosing and what you’ve been bringing to the table with your portrayals, quite frankly, are beneath you.

This sort of shennanigans started in Bram Stoker’s Dracula when you played Dr. Abraham Van Helsing.  Mind you, this was the first time you had ever played this sort of vaguely sexual gent who was more than slightly off his rocker.  It was something of a departure for you and I loved your portrayal of Dr. Van Helsing.  While Gary Oldman owned the film, I credit you with a large chunk of saving it from Keanu Reeves’ bogus turn as Jonathan Harker that could have sank the whole damn film like the Titanic.

In Fracture, you regressed towards a comfort zone you’d inhabited before  as a brilliant, yet diabolical engineer who shoots his cheating wife and is cocky enough to represent himself at trial.  Granted, this role was pretty much “Lecter-Lite”, but you still managed to shine.  You’d done this role before and better, but you got a by-card on the basis that, well, you’re Sir Anthony Hopkins.

Things started going further downhill when you voiced the role of King Hrothgar in the 2007 motion-capture animated stink bomb known as Beowulf.  Not even Angelina Jolie’s gilded boobies could pull this turd out of the punchbowl, peeing on the classic ballad and infusing it with far too much sexual tension and overlooking its previously prized tennants of valor and mysticism. As Hrothgar, you gave voice to a drunken king who still managed to pull in some hot, human local tail as his queen and then turn around to bone a monster and father hideous offspring from said monster boning.  Even worse, because Hrothgar wouldn’t admit to his One Night Stand O’ Shame, he cursed his entire kingdom.  You were decent in voicing the role, Sir Anthony… But I expected better.  It was too one-dimensional of a character.  An actor of your calibre should have been able to take that character and have imbued it with a more diverse range of emotion.  All I got from it was “drunken, horny old king.”

In Woody Allen’s You Will Meet a Tall Dark Stranger, you played (yet again), an upper-end-of-middle-aged poon hound who ditches his wife of many years in favor of a younger call girl, desperately trying to clutch at the strands of his youth.  Yawn.

And then, just recently, you went and did the unthinkable: You took on the role of Sir John Talbot (aka – the Wolfman’s daddy) in Benicio Del Toro’s unimaginable re-imagining of horror classic, The Wolfman.  If I were Good Queen Bess Tha Deucy-Deuce, I would have half a mind to revoke your knighthood for that alone, Sir.  However, you had to go and miterate upon the role that Claude Rains so masterfully portrayed of an estranged father who digs deep to find love, compassion, and faith in his troubled child.  You took this role and turned in a shallow portrayal of a father who cared more about trying to slam his sons’ love interests and concealing his dual identity as a wolf himself.  Ugh.  Such crap!

And now, I hear that you’re going to be playing the role of Odin in the upcoming Marvel Comics film, Thor.  If this were ten years ago — hell, maybe even five years ago – I would have been elated to hear this stroke of casting genius.  However, seeing the choices of roles you’ve been accepting as of late, Tony (may I call you Tony? I mean, you’ve gotten this far into my open letter, so I’m assuming we’re on familiar terms here), I’m approaching this with some serious trepidation.

I know Kenneth Branagh is directing the film and Natalie Portman is also playing an important role, as well, which leads me to believe that Marvel really wants to do right by the franchise.  However, with the type of turkeys you’ve been taking part in, Tony, I’m losing my faith in you to turn in a solid performance as the All-Father.

I’m beginning to worry that you’re going to turn Odin into Zeus, and as a student of the classics, world religions, and yes, comics, I’m not quite down with that.  Zeus is a womanizer to the core — which is the type of character role that you’ve been snapping up far too much of as of late. Odin, on the other hand, comes from the Norse pantheon which had no time for base hijinx.  Odin prized knowledge, honor in battle, and remained loyal to his wife and fellow Asgardians.  He wasn’t schtupping the Valkyries between draughts of mead and slaying frost giants. 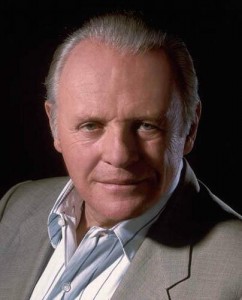 Sir Tony’s bringin’ dignity back… Those other suckas don’t know how to act.

Sir Anthony Hopkins, you have a chance to redeem yourself and your legacy by going back to your roots and making the role of Odin stand strong as a noble, yet complex figure.  As an admitted comic book nerd girl, Thor is one of my favorite books.  And I swear if you make this movie suck with yet another grey-haired, “me so horny” one-note performance, I will get up and leave the theatre and demand a refund, which I will promptly send to you to put towards your acting re-education so you can remember how to so wonderfully craft a role as you once did in films like Shadowlands, Silence of the Lambs, and a host of other films you starred in over a decade ago.

Dude, you’re 72. You’re not bringing sexy back with your choice of roles these past few years.  Yes, I know you don’t pen these roles and that’s solely at the discretion of the screenwriters.  However, you (or your agent) are taking on seriously limited fare that is beneath your capabilities. You’re teetering on the brink of character-actor territory.

I think that by pigeonholing yourself in the parts of these elderly carousers, you’re doing much more of a disservice to your legacy.  It was your sense of dignity that you brought to the roles of even the most base, or most fragile human beings that granted you that glimmer of sex symbol status.  Do us all a favor and say “I’m bringing dignity back” — which is far sexier than anything that Hollywood may want you to believe.