I’ve just downed the KFC Double Down, a sandwich that initially sounded like a joke:  Bacon, cheese, and some sort of spicy mayo sauce sandwiched between two pieces of juicy, KFC chicken coated in the Colonel’s “11 secret herbs and spices.”  Bread?  Who needs it!? Adding to the hilarity, there’s a whopping 540 calories, 32 grams of fat, and just ONE single, solitary gram of fiber in this meaty beast.  You could opt for the “healthier” grilled version with a mere 460 calories and 23 grams of fat… But why quibble over 9 grams of fat even though it’s supposedly “better” for you.  Then again, that’s like saying  half a carton of cigarettes a day is” better” for you than smoking the entire carton.

If you’re gonna gorge yourself, you may as well go the whole deep fried nine.

Having read about this artery clogging wonder, my friend Leila and I decided to make a pilgrimage to KFC to snap up one of these Double Down Meals.  She got hers with the Potato Wedges while I went the classic route with the unbeatable KFC Mashed Potatoes and Gravy.   Oh… And a Diet Pepsi.  (I’m a big fan of irony. Nothing goes better with grease and sodium than the sweet, sweet bite of icy cold aspartame.)

Stepping up to the counter to order the “Double Down Value Meal,” I mused just calling a spade a spade and referring to it as “The Fat Fuck Meal.”

Earning my “Fat Fuck” status, I decided to add a glutonous boost of flavor by dipping the Double Down into my mashed potatoes and gravy for a spicy zip.  (It’s delicious.  Really.  Try it!) 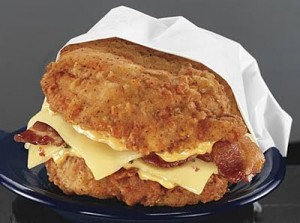 So far, it’s been over two hours since ingesting the sandwich and I have yet to be doubled over by the double down.  The Colonel’s Punishment has escaped me, thus far, and besides some faint digestive rumblings, I have yet to see the inside of a bathroom stall.  With all that grease and fat, I was expecting to find myself hunkered down on the crapper and a rectal luge to come shooting out with enough force to lift off the Apollo 13.

Mind you, I took the precaution of preparing my stomach for the onslaught of unhealthy that would soon invade my gullet like some sort of medieval battering ram powered by 1,000 angry villagers.  Having exercised some restraint with my Easter candy, I had several remaining Cadbury Eggs and Russell Stovers eggs left, among other items.  I chose a Russell Stovers Strawberry egg and one Cadbury to lay the foundation upon which my Double Down would sit.

Normally, I eat pretty healthily. I rarely eat red meat and subsist off of fruit, veggies, yogurts, grilled fish and some chicken. For that reason, when I do eat fast food, I’m pretty susceptible to The King’s Revenge and the McSquirts, my digestive system crying out “Robble, robble!” as it’s squelched into submission. Oddly enough, the Colonel has shown mercy on me and my colon.

Aside from having busted one in my office about a half hour after eating the Double Down and engulfing my cubicle in a mushroom cloud of noxious fumes for a ten-second stretch, subsequent silent blasts have yielded very little odor.

So far, the only negative thing I’m feeling right now is a slight fuzziness in my head. It’s kind of like a toned down hangover with some hot flashes.  That could be due to the mother lode of sodium in this sucka — 1,380 milligrams, to be exact.

Thanks for taking it easy on my colon, Colonel!

So, it could be that the Colonel has done to me as he’s done unto his chicken and done me right, that barrier of Easter candy helped spare me, or it could just be that lone gram of fiber in the Double Down that’s spared me from crapping my brains out.

Food snobs and health critics will vilify this sandwich.  (Well, as much as you can vilify an inanimate food object.)  However, the Double Down is delicious.  It goes down easy, packs quite a bit of juicy flavor, and isn’t quite as slathered in special sauce as you would think.  Sure, it’s greasy, but if you’re headed to KFC, you’re not exactly going there for the salads.  If you don’t mind the feeling of a slight food hangover, give this one a try.  I won’t make the Double Down a way of life, but as far as an occasional deep fried delight, this one lives up to the hype as much as a “sandwich” can.

– Dedicated to my friend, Danielle, who is across the pond and sadly, cannot enjoy the decadent deliciousness of the “Double Down” until she returns Stateside.  God speed you onwards towards transcontinental transfats, my friend!