I’ve seen the commercial with Tiger Woods looking all sad-faced and sorry. Since you’re still endorsing him, can you lengthen the five-character limit on your Tiger Woods Nike ID sneakers so that I can fit “I want to treat you rough. Throw you around, spank & slap you…Hold you down while i choke you & fuck that ass that i own” on my custom shoe?

For all of the flurry of negative press Tiger Woods has received, the man’s game on the links is still bulletproof.  Tiger may have given new meaning to “18 holes” with a tally of mistresses possibly exceeding that number.  He may even beat out Jesse James and Senator John Edwards for a coveted green jacket on the Whore Masters Tour.  But that’s not my gripe with the guy.

What he does in his private time away from the green should have little bearing — if any — on how his contributions to the sport of golf are viewed.  I’m not a fan of golf, but after the science and skill behind it was explained to me by a friend, I do realize that there is more to it than meets the eye and requires significant dedication and prowess. I’ll take watching football or MMA any day over golf (it’s still boring as hell to watch),  but barring my own personal preferences, it’s impossible to deny that Tiger Woods revolutionized golf.  He single-handedly upped the ante, turning what was once sport for saggy old white dudes into a younger, more athletic man’s game.  He opened the doors for people of all ages and races to embrace another sport.  Moreover, he did the impossible and made golf … cool.

And who better to capitalize on that new-found cool than Nike and a host of other sponsors courting Tiger to ply their products?  Today, endorsements are just as intrinsic to a sport as “the love of the game.”  You can’t blame atheletes for wanting to maximize their earning potential, even if it’s at the hands of companies who are all too willing to profit from a star’s given bankability.

Not only do athletes have to live up to their “role model” status on behalf of their respective sports and their all-powerful, overseeing associations, but they must appease their corporate sponsors to continue to rake in a tidy side income.

Trust me, I’m not crying in my cornflakes for these guys.  Being able to play sports for a living and then hawk products for an additional hundred million is hardly Shakespearean tragedy. These guys are entitled to make as much money as they can for using their talents.  It’s smart and what anyone else in their position would do.  They’re just fortunate enough to be able to do what they love for a living and make an exceedingly comfortable living doing it. 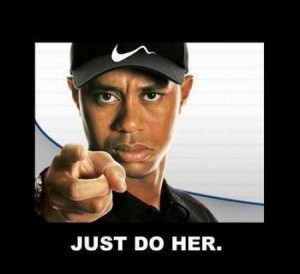 What I’m condemning here is the hypocritical culture that holds up a standard of faux morality for public figures to project.

It’s pretty crass to trot out the ghostly voice of Tiger’s dearly departed dad, Earl Woods, over this new commercial, which looks to be the first in a series of Woods’-flavored Nike ads. Earl’s voice is heard asking Tiger what he’s learned from his mistakes as Tiger stands by, breaking the fourth wall of the camera and staring with sad, puppy dog eyes at the viewer.

It’s certainly a poignant image.  Speaking as someone who has lost both parents at a relatively young age, the commercial hits home. You always wonder what your parents will say about the life you’re leading now without them there to guide you.  I can certainly sympathize with Tiger Woods on a human level about that.  But ultimately, regardless of if you have your parents by your side or not, you make your choices and learn to live with them and their upsides or consequences.

It’s just bad form on the part of Nike and for Tiger Woods to use his relationship with his dead father as a sympathy ploy to try to repair his image. Lots of other people have dead loved ones.  But how many of us have the ability to use the emotions stirred by conjuring their ghosts to score a raise or a promotion? How many of us really would stoop that low just to gain favor in the eyes of the boss?  Furthermore, in a regular, 9-to-5 environment, it’s frowned upon to bring your personal problems to work.  Yet, for some reason, we look to celebrities far removed from the concerns of the average working class person to provide us with a moral compass.  It doesn’t seem logical.

The fact that Tiger Woods agreed to this commercial in an effort to appease his biggest remaining sponsor says something about his moral fiber. (Beyond the fact that he banged every chick in a 50 mile radius who bore a passing resemblence to a Penthouse pet and sexted them with some totally hilarious messages.) The weepy-eyed look he fixes the camera with solidifies that all of the hand-wringing at his “I’m so sorry, Uncle Albert” press conference was a carefully crafted performance designed to win back his fans and sponsors. 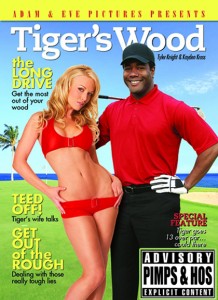 Tiger was sorry.  Sorry he lost millions of dollars in advertising revenue.

But that has absolutely nothing to do with Tiger Woods’ ability to golf like a mutha fucker.  The man is untouchable.  Why should his daliances with a parade of poonani — none of which belonged to his wife — have any effect on his legacy as a golfer?

So many people are talking about how they’re “boycotting” watching the Masters and damning the PGA for welcoming Tiger back after his transgressions. Why? For cheating on his wife?  That has nothing to do with golf. If he cheated at the game, it would be one thing, but what he does in his private life is his own business.

Where does morality enter into sports?  More importantly, why? Like rock stars with jerseys, athletes have their fair share of groupies.  Eating caviar off the tits of barely legal girls is just one of the perks of the gig.  You’d be a fool to think that the majority of these guys live otherwise.  Sure, there are a few moral, tee-totaling athletes and celebrities out there.  That’s commendable, but completely separate from what they do and how well they do it.  We shouldn’t have to be told that someone pitching Gatorade is a hero.  You can admire the dedication they put into their sport or craft.  You can apply that standard of dedication to your own aspirations.  But you’re in for a let-down and are depriving yourself of that appreciation of an athlete or celebrity if your personal moral code isn’t in lockstep with theirs.  They’re just celebrities.

Granted, Its always nice when you learn that the people you look up to are honest, humble, and “what you see is what you get.” However, it shouldn’t be mandatory to be able to recognize that even a douchebag can be a great athlete, musician, or comedian.

Is Tiger Woods a scumbag.  Yes!

Is he still a great golfer? Yes!

What do either of the two have to do with one another?

My only gripe is that I resent the lack of honesty that Tiger Woods and his sponsors have approached the entire sordid scenario with.  Rather than deliberately milking his dead dad for sympathy and welling up at his super-staged press conference, I’d rather see Tiger Woods embracing the private-life-made-public that he’s led.

Picture it: Earl Woods’ voiceover is heard asking his son what he’s learned. A shot of Tiger gazing forlornly at the camera is followed by clips of him winning the 2010 Masters, hitting birdie after birdie.  Cue another shot of Tiger’s sad face giving way to a toothy grin as he says: “I’ve learned that I’m still the best damn golfer in the game today.  And chicks love me for it it!!  Ca-ching!!!” Fade out to black.  Cue graphic of Nike swoosh.

I realize that I’m talking from a purely idealistic standpoint.  Realistically, Nike wants to show moral, sportsgear buying America that their spokesperson is a human being with frailties of  his own.  They want their audience to connect with Tiger Woods and buy the gear and apparel he’s shilling for the Swoosh-meisters.  They believe (and are likely right) that people like the illusion of a penitent celebrity who has fallen from grace.  They want to see him poised to rise like a righteous phoenix, not on the strength of his game, but from a newly-reformed sense of “morality” propelling that success forward.

And keep in mind that Tiger has to make ammends to an authority higher than any Gatorade or Nike CEO: his wife.  (HALF, Tiger!  Half of everything you own!)  If he wants to hang onto as much of his cheddar as possible, he’ll play the role of Captain Contrite to the camera for all it’s worth.

In a perfect world, though, I, personally, would appreciate honesty from celebrities and public figures.  Just be who you really are so long as you’re doing what you’re paid to do well.  Let people decide for themselves who they want to look up to and why.