It’s been awhile since I’ve posted about my poop.  I was reminded of this watching an episode of House on Monday in which the Patient of the Week was a chronic blogger who wrote about everything – except her own poop.  When the titular catankerous M.D. asked her why she didn’t, she said because it was “gross” and not something people would be interested in.  Apparently, House seems to be the only one to share my sentiments that poop is hilarious and interesting.

Everyone does it, yet no one wants to talk about it.  People are more apt to discuss their sex lives than poop, with fewer eyebrows raised as to the subject matter.  Think about it.  When you’re talking about sex, you’re not just bringing up something that is the private, personal business of yourself, but also the private, personal business of the person(s) you’re doing it with.  When you talk about poop, unless you’re pointing the finger at the local grocer who sold you Ass Blaster Bran or encouraged you to have a fiber fiesta, you’re the only party involved.

That is, unless, someone you know unleashes a particularly interesting butt nugget and you just have to talk about it.  In my family, a certain thing called “shame” does not exist.  We’re pukers, we’re farters, and we’re crappers.  That’s just the way it is.  We think nothing of taking the phone into the bathroom and talking while taking a dump.  During my high school years, I’d talk to my friends while pinching a loaf.  One occassion in particular, my friend that I was talking to on the other line was also releasing some chocolate hostages, having also been the victim of the batch of “Death By Chocolate” ice cream that he had with my family at my house the day before.  (Whoever named that ice cream sure wasn’t kidding.)

The Craptacular Spectacular ante was upped, however, when another high school friend of mine photographed a monstrous turd he had unleashed, snapping a Polaroid of the brown beast and scrawling the epithet, “The Log,” under it in bold black Magic Marker.

My brother and I were so impressed by my friend’s turd trophy that we decided that we should try our hand at preserving poop for posterity.  It couldn’t just be any turd… But a piece of dung that would make you sit up and take notice! That year, I got my first 35mm camera and in between snapping photos of people with gigantic asses bending over at the mall, I took a picture of a strange, squiggly offering that I had grunted out. 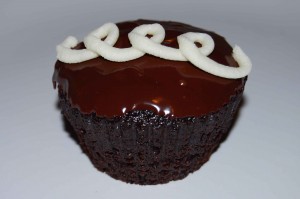 It was long, thin, light brown and formed a completely unbroken, squiggly line that curled over itself like calligraphy. I dubbed it “The Hostess” because it looked like that little, squiggly line of white frosting that decorates the top of  a Hostess chocolate cupcake.

I still have that photo to this day.  But because I’m not sure where you, dear reader, stand on the issue of poop pictorials, I’ll keep that one in my reserves for now.

While most parents would find this disturbing, mine found it amusing.  Then again, like I said before, we’re farters, pukers, and crappers of the first order.

That hasn’t quite extended to my brother’s wife and my own significant other.  My sister-in-law was aghast the first time Dad ever farted in her face and then laughed.  This, I informed her, was just his way of admitting her to the family and saying, “Hey, kid! You’re one of us!”

As for my long-term boyfriend, that thing called “lack of shame” hasn’t quite rubbed off on him after all these years.  He’ll talk on the phone while on the crapper (something he hadn’t previously found to be acceptable when we first started dating), but the topic of his turds is verboten and a source of shame.

Which is why he will hate that I’m committing this story to blog format.

Anyone who knows me or my boyfriend (or who has heard me talk about him) knows that he’s a regular guy… And he likes to stay regular.  With the aid of prune juice.  Tiger Woods may be barely hanging onto his Nike sponsorship by a thread, but my boyfriend could have a Sunsweet spokesperson contract on lock if he really wanted to (or if he was actually famous). Please believe. 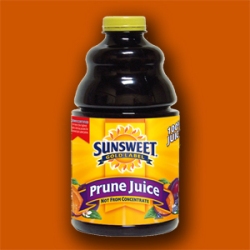 Sunsweet: You WILL respond.

Because his diet lacks in fruits, vegetables, and other sources of fiber and because he’s so paranoid about his colon becoming obstructed and (possibly putting him at risk for colon cancer — a rather legitimate fear, I’ll admit), every night like clockwork, he will guzzle two gigantic glasses of Sunsweet prune juice.  It has to be Sunsweet. No substitutes accepted.

And, again like clockwork, around 8:20PM, after dinner and a large glass of water, he spends 20 minutes in the bathroom for Round 1 of his colon cleanse.

Farting and fizzling noises emmanate from the bathroom for the bulk of a half an hour.  The cycle repeats itself again, about a half hour later, when he makes an offering of the rest of his rectal waste products at the porcelain altar.

One night, however, not even the Sacred Sacremental Sunsweet could get the job done.  A dinner consisting of leathery beef, corn, and potatoes slathered with gobs of cheese made for a blockade that would have made even the ancient Spartans proud.

He went to sleep without having squeezed out so much as a nugget.

At around 2:30 AM, Eastern Standard Time, I awoke to my boyfriend getting up out of bed, his voice lowered in an alert, serious tone:

I squinted my eyes in the dark. “What’s up?”  I was thinking maybe there was an intruder who had broken into the house during the night and we’d have to reach for the ol’ Peacemaker and blast us some burglar.

“Don’t move,” he repeated before finally dropping the bombshell: “I think I shit the bed.” 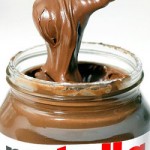 “WHAAAAAT!?!?!” I jumped out of bed and threw back the covers.  Sure enough, there it was.  A small smear of brown doo-doo butter smack dab in the middle of the bed.

I had to take command of the situation like a general. A general who hadn’t shit himself.  Now fully awakened, I had become the Patton of Poop and began barking orders.

“Alright, you go to the bathroom. I’ll clean this off, pre-treat it, and throw it in the hamper and change the sheets.  Go do the rest of your business.  Clean out your ass and get back to sleep.”

As it were, my boyfriend sleeps in the buff, making this accident possible.  I, on the other hand, prefer to sleep fully clothed.  Had I rolled the wrong way onto the brown landmine, one of my favorite t-shirts may have been claimed as a casualty of this dis-ass-ter.  I would not have been pleased.

Anyway, the stain was removed, the sheets were changed, and everyone in that room got a good night’s sleep.  Before he drifted off, my boyfriend said, “Please… Whatever you do.  Don’t tell my kids… And don’t tell your Dad.”

To be fair, I never told his kids about the time he crapped the bed…. But the next morning…. 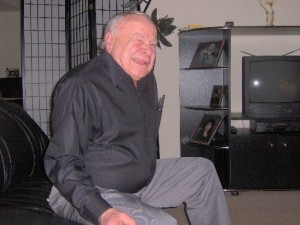 The Man, the Myth, the Legend: my Dad.

Dad and I had a good laugh about that one for weeks afterwards.  My boyfriend eventually learned that I had let the crap out of the bag when Dad called up one night.  He answered the phone and Dad’s gruff voice spoke from the other end: “Hey! How’s it going?  Shit yourself again lately?”

I could hear Dad’s laughter on the other end as my boyfriend handed the phone to me.  Shaking his head he said, “You told him, didn’t you?”  I nodded and started laughing myself.  He got over it and wasn’t really mad about it.  How can you shit the bed and not expect someone to laugh at it!?

Anyway, this isn’t my first post on poop and won’t be the last.  However, I will refrain from talking about the B.M.’s of others and will recount my own bowel battles — at a later date. Tune in next time for the saga of “I Shat the Wall and the Wall Won.”