Is America sick of John and Kate Plus 8? TLC doesn’t seem to think so as evidenced by their ad nauseum marathoning of the show this weekend in 24 hour blocks. As if the steady stream of online tabloid reports on the fertile philanderers’ daily doings wasn’t enough, TLC has gone into John and Kate overload, hyping the newest season of their reality TV show by airing back-to-back-to-back episodes.

I’ve been sick of John, Kate, and their unwieldy horde for awhile now. Mind you, I’ve never seen an entire episode of the show, but have been exposed to dozens of commercials for the series. I would cringe every time I saw one while watching Miami Ink, L.A. Ink or some of the other tattoo-related shows that used to air on TLC. Miami Ink however, has been cancelled to make room for more shows about people with Ma and Pa Kettle-sized broods like the new Table for 12 and 18 Kids and Counting. There’s yet another new show devoted to “little people” called The Little Couple which seems more like a prelude to Little People, Big World.

You can practically see some programming exec sitting in his leather swivel chair at TLC headquarters saying “Let’s get some more midgets up in this piece!” (Need I mention that the executive is probably some 40-something, uber-white yuppie attempting to incorporate what he believes to be hip, urban slang into his boardroom vernacular?)

Does anyone else remember when TLC stood for “The Learning Channel”? There’s very little “learning” to be had anymore. Hell, half of the stars of its reality-based programming haven’t learned how to use a condom yet. Now the network features programming so inane that it makes Daisy of Love look like Meet the Press by comparison.

To be fair, even Miami Ink spawned more tattoo shows, saturating the airwaves with spin-offs like L.A. Ink with Kat Von D and the short-lived London Ink. In keeping with what seems to have been a “more drama” mandate handed down by the TLC powers on high, Miami Ink deviated from its original, relatively drama-free format that focused on tattooing as an art form with four renowned artists. By the time it reached its fourth and final season, the show was more of a soap opera for heavily-inked dudes than it was about the business and art of tattooing.

Discovery seems to be the only educational-themed channel holding up its end of the bargain with a variety of eco-themed shows rounding out its schedule in addition to the ubiquitous American Chopper (which has also succumbed to the “more drama, less craft” formula).

Although it’s a separate network from Discovery, TLC, et. al., the History Channel and A&E are picking up on the current trend favoring sensationalism over knowledge. As it stands, the History Channel should just rename itself the Apocalypse Channel. Every time I turn the History Channel on, there’s very little “history” to be had. Instead, there are numerous shows detailing how the world just might end – be it by comet, Mayan prophecy, or unforeseen ecological disaster. The channel probably isn’t too far off from announcing its fall lineup including The Nostradamus Quatrain n’ Comedy Hour or The Illuminati Variety Show to tie in with whatever Dan Brown book is hitting theatres or the Netflix queue.

If the History Channel hasn’t totally fixated itself on apocalyptic speculation and it’s a slow week, you can always count on a show or two about Hitler. (Hmm… The Hitler Channel! Now that has a certain ring to it!) The History Channel doesn’t even do shows about Hitler, but more of the sensationalistic, mystically-themed exploits of the Third Reich, such as Hitler’s co-opting of Norse Mythology to pimp his Master Race. (I think I’ve seen this particular show five times already.) 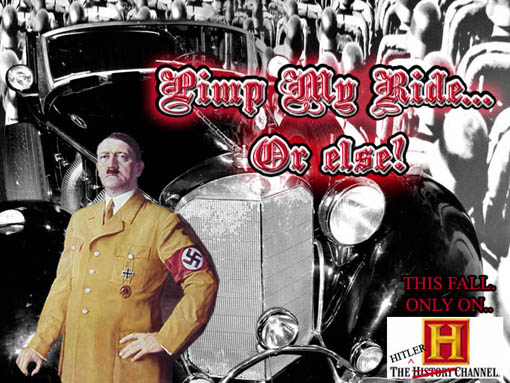 It seems that the History Channel has become blissfully unaware that there are other historical figures than Hitler. Even if they’re stuck on WWII, there are other aspects to explore about that period in history. How about a splash of Hirohito? What’s wrong with a dab of Mussolini every so often? Hell, Night At the Museum: Battle For the Smithsonian probably features more historical figures than the History Channel does right now. It’s a rather sad state of affairs when you find yourself looking to Ben Stiller as a de facto history teacher instead of a bunch of networks that claim to espouse learning.

And yet, it all comes back to John and Kate and their plus eight. I can’t fault them for wanting the network to subsidize their mansion, the bodyguard that Kate’s banging on the side, or the revolving door full of nannies and hired help who are actually parenting the couple’s kids. However, I blame the programming executives for indulging them, and in turn, using the banner of learning and education to create subpar pseudo-celebrities out of self-entitled suburbanites who have so little in the way of substance to offer to the world that they make Paris Hilton look like a Nobel Peace Prize winner. Granted, Kate seems to have a talent for emasculating her husband once or twice per episode, and John is pretty darn good at impersonating a eunuch. In light of the current events of “John and Kate-Gate,” it’s not hard to understand why John’s seeking validation from outside sources and screwing around on Kate and her Marcy D’arcy hairdo. In the immortal words of Whitney Houston, “It’s not right… But it’s okay.” 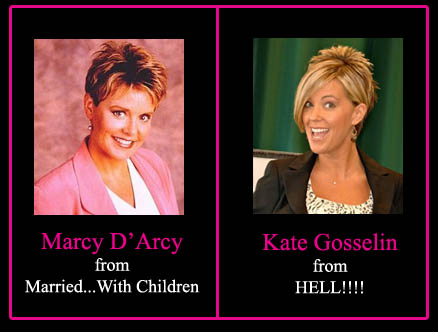 Personally, I can’t wait for a show focusing on the couple’s extra-marital affairs. They could call it “John and Kate Fornicate”! Think about it… It would be brilliant! They won’t even have to pretend to parent their children anymore! Kate could even manage to squeeze out another ghost-written book deal out of it, too!

Maybe TLC and its satellite networks should consider getting back to the basics of their programming. Better yet, if TLC is so hell-bent on zeroing in on a certain demographic, why not focus on real families that people can relate to? Chances are, if you’ve had infertility problems and can afford to seek out specialists, much less carry eight children to term and make the decision to raise them in a cozy, upper-echelon Philadelphia suburb, than perhaps John and Kate aren’t the Everyman and Woman that they’re made out to be. Rather, TLC is trying to pander to its audience by making them believe they have something in common with spoiled celebutards.

Instead of cramming John, Kate, and all the other rubber-chuckers on their lineup, TLC could set itself apart from the deluge of drek and feature shows focusing on real families struggling to make ends meet during the recession. Why not have “What Not to Wear” do a special, Salvation Army episode with Clinton and Stacy slumming it on a budget? Instead of shows like Say Yes to the Dress, why not do a show on how to put together a classy, meaningful wedding ceremony on a budget, rather than building up unrealistic expectations and going into debt before the ink on the marriage license is even dried?

It may not be glamorous to see families trying to make it on a single income, but chances are, there are a lot more people that could identify with those more pressing struggles than merely dodging fame.