Philly may be known for its cheese steaks, soft pretzels, and “water ice” (the Philadelphia terminology for the food item most people everywhere else refer to as “Italian Ice”)… but it sure as shit isn’t known for its sense of style.

To be fair, each section of Philadelphia has its own unique vibe. In that sense, it really is “the city of neighborhoods.” In addition to the distinct brand of ambiance native to each part of the city, some areas of Philly have a better sense of fashion than others.

I happen to live in Northeast Philly — AKA – The Land That Style Never Touched. With the possible exception of Manayunk, you won’t find a more shoddily turned-out area of the city. (While the Northeast owns up to its White Trash status and makes no pretense about it, Manayunk/Roxborough is home to the bizarre dichotomy of the White Trash Yuppie. Its geographical locale at the tip of Montgomery County renders it as close to a suburb as you can get while still technically being considered part of Philadelphia (which could account for such white trash snobbery). That said, the Northeast suffers from a severe lack of snappy dressers. 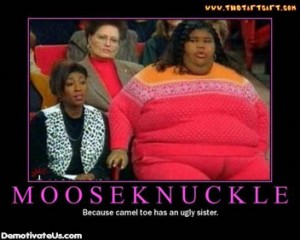 On my daily commute to and from work, I’ve seen some pretty heinous outfits. Pick up a magazine from five, maybe ten years ago. That’s what you’ll see on any given day in 2009 in the Northeast. It’s small town fashion at its worst, transposed to the big city: Printed turtlenecks with tiny patterns worn under bulky sweaters. Velour track suits. Tight sweatpants that yield a tantalizing glimpse of camel toe (or “moose knuckle,” depending on how big it is). All your old favorites are there!

And heaven forbid you actually put some thought or (dare I say it) pride into putting together your attire! If you do, you’ll find yourself treated to the Stink-Eye Supreme by some Hagen Dazs-huffing hippo with her hair tacked into a high bun whose muffin top threatens to eclipse the side pockets of her unfortunately skin tight jeans.

Conversely, for every fashion victim riding SEPTA, I’ve seen some pretty creative dressers on the bus, too. No one (myself included) busts out the Versace to ride SEPTA. (Not that I own anything by Versace. Except for a kick ass pair of sunglasses that would do Elton John proud!) That’s not to say you can’t dress well on a (very low) budget.

This past week, I saw a very “unique” ensemble worn by one of the passengers on the 84 bus. While it wasn’t the pinacle of fashion, I have to hand it to the girl for creativity.

I see a lot of crazy things on the 84 from time to time. One of the strangest I had seen over the years was the trend of “conjugal visit Polaroids.” The 84 bus passes by a local Philadelphia prison. The bus is usually packed with people coming to and from visiting their loved ones during the morning and afternoon commutes. On a few separate occasions, I’ve seen visitors on the bus returning from their visit clutching Polaroids of themselves and their favorite inmate.

One day, I had to do a double-take when I saw a girl wearing the same outfit as she was on the bus in the Polaroid photo she was clutching with her prison beau’s arms wrapped around her like they were at the prom. Only in lieu of formalwear, the girl was wearing denim capri’s and layers of pastel polo shirts and a neon tank top and her “date” was clad in the standard-issue orange jumpsuit of the Philadelphia House of Corrections. His arms were delicately draped around her waist as they stood together, her back to his chest, both smiling prettily for the camera.

The only thing missing were the requisite balloons, streamers, and trellis full of flowers behind them and it could have been a snapshot from an oddly-themed prom. Forget “A Night Under the Stars”! Here comes “A Night Behind Bars”!

This wasn’t the first time I had seen the Conjugal Visit Polaroid on the bus… And it wouldn’t be the last.

Apparently, some of the visitors really get creative when they know they’re going to have a photo opportunity with their beloved behind bars. On their way back from a visit to the penitentiary, one woman and either her sister or her inmate-boyfriend’s sister had brought several young children with them for what would presumably be a family portrait. Both girls and all of the kids were wearing matching red t-shirts.

Lo and behold, one of the girls was clutching a Polaroid. My curiosity piqued, I looked over and wouldn’t you know it, but it was yet another Conjugal Visit Polaroid. In the photo, the girls were holding their kids on their laps and seated at the feet of the only person in the photo not wearing a red t-shirt. One of the kids was sitting on the inmate/boyfriend/brother’s lap. It struck me that this could be the family Christmas card if you Photoshopped Santa hats on everyone in a red shirt and a white beard on the inmate – if Santa wore an orange jumpsuit.

I don’t know if that was the original intent behind this impromptu family photo, but it sure looked that way.

That’s not to say that I’m downing the idea of Prison Polaroids. Inmates are human, too, and deserve time with their families and friends who love them. It’s actually quite nice that the family is allowed to have a memento of the person who can’t be a part of their everyday lives due to incarceration. However, I often wonder how these photographs happen the way they do. The matching red shirts (that would undoubtedly clash with the orange jumpsuit) and prom-like atmosphere in these photos certainly merits a hearty “What the FUCK!?”

While I’ve seen some doozies, this week however, I saw the most creative combination of Conjugal Visit Polaroids and fashion that I may have ever seen. Ever.

Either that, or a heralding sign of the Apocalypse.

It was a crowded rush hour ride home when a gaggle of prison visitors got on at their stop. It was standing room only and one girl wearing a hoodie had situated herself in front of me. The hood of her sweatshirt was up and I was afforded a full-on look at the back of her carefully airbrushed hoodie.

In that instant, I was kicking myself for not having my camera ready or having a good enough angle to inconspicuously capture this image for all time with my cell phone camera.

On the back of her hoodie was a giant, airbrushed portrait of the hoodie-wearer and her imprisoned boyfriend captured for posterity in their very own Conjugal Visit Polaroid. Only instead of being placed in a photo album, there it was — big as day and splattered across the back of a very dubious fashion statement.

If that don’t grab your attention as a fashion statement, nothing will!

The airbrushed photo on the back of the hoodie still had the familiar white border of a Polaroid snapshot as part of the artistically rendered design, framing the prom-like, posed photo of the two lovebirds — one of which was a jailbird.

Before I could find an inconspicuous way to snap a shot with my piece of shit cell phone of this miraculous monument to love behind bars and airbrushed fashion, the girl hopped into an open seat, the back of her hoodie obscured for the remainder of the ride.

Son of a bitch!

I may not have been able to take a picture of it, but someday soon, I hope to capture the rare, elusive prize of the Conjugal Visit Hoodie on film. Hey, if someone can get shots of Big Foot and the Loch Ness Monster, damn skippy, I will get a photo of this article of clothing perhaps more mythical than the Shroud of Turin itself. For now, dear reader, my mere description will have to suffice and the Conjugal Visit Hoodie shall remain the stuff of legend.