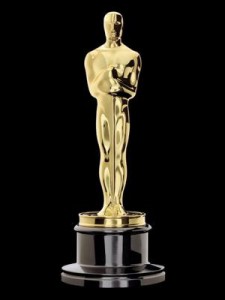 Once again, the ubiquitous awards season is upon us. Last night, it was the Golden Globes. Next month, it’s the Academy Awards. For fans of film (and fashion), it’s the equivalent of the Super Bowl.

Despite the fact that these awards haven’t offered a wildly unpredictable moment in ages, even the poorest showing of one of these fetes pulls in above-par Nielsen ratings. So, what’s the attraction? Why is it that, in spite of the fact that eight times out of ten we can all guess who the awards are going to go to, most of us tune in religiously to watch these awards shows?

One one hand, you can chalk it up to vanity and validation. That we each tune in for some scrap of superiority if our favorite film of the year wins. That somehow, if we find our personal picks in agreement with that of the esteemed Academy, it makes us better arbiters of taste.

That only explains perhaps one camp’s philosophy on awards shows. Why is it that viewers can become as emotionally invested in the outcome of who walks away with a gilded statuette as, say, a football game or other spectator sport?

Plain and simple? Because none of us ever really leaves high school. Joss Whedon nailed the sentiment perfectly with Buffy the Vampire Slayer. High school is the one, big metaphor that we can all relate to and we carry it with us (repressed or not) wherever we go.

If you want any further evidence of that fact, take a gander around your office or place of business. Someone’s always gossiping. Someone’s always blowing off work (the adult equivalent of cutting class) to chat with co-workers around the water cooler or take a personal call. Personal intrigue takes precedence over curiculum. And of course, the smokers are sequestered in their own corner near an exit, indulging their habits outside of the building and sneaking in as many drags off their cancer sticks as time allows. The only difference is, none of these smokers are playing hackey-sack or Magic: The Gathering. 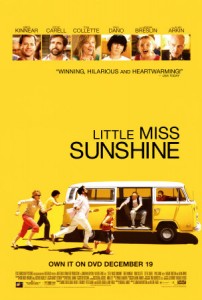 Nothing much has changed.

When you look at the Academy Awards and its continued allure, the high school correlation can best be summed up with that grand poobah Rite of Passage: the prom. Granted, Hollywood awards shows are much more elaborate than the high school prom experience. However, all of the standard props are there: The parade of formalwear, handing out awards, ill-timed music that cuts in at someone’s pivotal moment. (Consider the mood-busting power of switching gears from Journey’s “Open Arms” to “Celebrate” by Kool and the Gang as an image for integration.) And judging by last night’s camera panning to capture the expressions of Billy Ray and Miley Cyrus as the Jonas Brothers walked onstage to present an award, there’s always the glorious shame and humilliation of running into an ex at one of these things.

Although none of the viewing public at home has much of a stake in an awards show, we watch anyway. We crack snide, running commentaries with friends at our own parties at home or Twitter about it online. (Incidentally, if you want to read my mad Twitterings on the Golden Globes from last night, add me!)

It’s fun. It’s like being at the prom. And you do have the option of dressing up in formalwear in your living room, provided you keep the curtains closed so your neighbors don’t figure out you’re batshit crazy. By the same token, beyond the fabulous honors themselves, the fashion factor provides a good dose of fun. You know you do it, too and you love it when Joan Rivers takes the piss out of someone who committed the crime of taffeta or under-accessorization!

There’s something more about these awards shows that brings us back to high school and simultaneously, says a lot about each of us. If awards are like being voted Prom King, Prom Queen, or even Class Clown, even if you’re not nominated, there’s always someone you hope wins it. 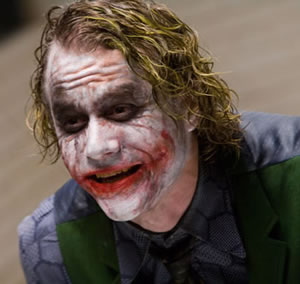 the one you don’t want to win — the one who always gets the accolades or is just the “safe” choice — gets it. Sometimes you root for the big man on campus, a film like Gladiator, which is kind of the equivalent of the nice, closet-emo jock at school who won’t let the other jocks shove kids into lockers.

On the other end of the spectrum, some of us root for the underdog – the films that aren’t dripping with costume changes or high-brow, high-concept drama that most of us find to be unrelatable. When the Junos or Little Miss Sunshines of the film world get an award, it’s like one for (in the immortal words of Gloria Swanson in Sunset Blvd.) all the “wonderful people out there in the dark.” That maybe the Academy or Hollywood Foreign Press are human after all. Perhaps they recognize that something without a big budget speaks for a silent majority.

That said, here’s to Heath Ledger being recognized at the Golden Globes in the Supporting Actor category for his performance as The Dark Knight‘s Joker. And to Mickey Rourke winning Best Actor for his role in The Wrestler. While their performances were completely different, I haven’t seen such vivid, emotional portrayals in ye 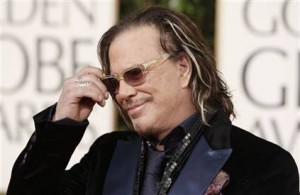 ars. Damn if Mickey didn’t look “so fine” in his purple tux with sequinned scarf and frosted highlights! Call me kooky, but I’d snatch him up as my prom date any day of the week. I’m a sucker for tastefully tacky boys with sunglasses who rock the wallet chain with formalwear. (Note: Mickey! There’s still time for me to pick up something low-cut and trashy for the Oscars! We can party at P. Diddy’s after the show! Call me!! )

As invested spectators of these awards shows, much like the experience that watching a film produces, we live somewhat vicariously through the stars on the red carpet. There’s some emotional connection with art and those who play a role in its creation. Art imitates life and therein lies the attraction. We all want to see something we can identify with. Like the people who watch to gain a sense of validation that they picked the right horse to bet on, there’s vindication in seeing that you’re not alone in your choices. That someone else recognizes the reality of what speaks to you.

And on a purely shallow note, it’s fun to comment on who looks hot or who looks like a hot mess.