Is anyone else burnt out on all this “holiday cheer”? Days before Halloween — not even before Thanksgiving – Rite Aid aisles were already clogged with tinsel, wrapping paper, and Santa Claus hats right alongside wolfman masks.

It wasn’t even Thanksgiving yet, and radio stations had been “Rockin’ Around the Christmas Tree” non-stop. One of my co-workers (who I actually like a lot, her wretched taste in music not-withstanding), has been cranking the Christmas crap on her radio for a solid eight hours since November 1st. If I didn’t have my headphones with me at all times, by now, I might have snapped and had my very own Do The Right Thing moment.  Nothing could be more rewarding than the prospect of engaging my co-worker in a boom box pissing contest, blaring the heaviest contents of my iPod as a jarring contrast to John Denver’s rendition of “Rudolph.” (While you need a “Rocky Mountain High,” to get through that one, it’s nothing compared to Paul McCartney’s “Simply Havin’ A Wonderful Christmas Time” — a song I hold to be my own personal kryptonite with the power to make me go from “zero” to “postal” in under 12 seconds.)

If the endless onslaught of Christmas music doesn’t make you want to take a blowtorch to Frosty or hurl a Yule log in his general direction, the nightmare of Christmas shopping will. For personal reasons beyond fighting through the throng of mouth-breathers lining shopping centers, willing to trample others to the death in pursuit of holiday steals n’ deals, I’m sitting out the holiday shopping debacle. Online shopping has proven to be much less of a hassle and lessens your chances of having to employ paramilitary tactics to score a bargain.

If you are, however, planning on braving the crowds, I’d like to present to you an unorthodox tactic that I have used in the past. Because sometimes, you gotta pull out the unexpected when someone starts stockpiling all the good toys.

Illustrated comic book panel-style by yours truly, here’s a gross little tale of a non-violent approach to snapping up what you want this holiday season!

A few years ago, my brother and I were shopping at Toys R’ Us. 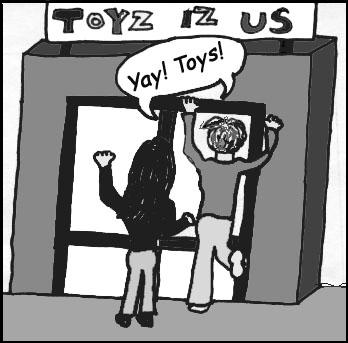 Being a big fan of both wrestling and toys, not wanting to break the bank, I made the suggestion to my brother to get me a wrestling figure or two for Christmas. Simple, cheap, and easy — like a night with a Philadelphia hooker, minus the STDs!

Since I already had a ton of wrestling figures and toys showcased on my bookshelf, my brother didn’t really know which ones I did or didn’t have. (I suppose right around now would be a good time to mention that I was at least in my early 20s at this point and my brother was in his late teens.) I would just point out which ones I didn’t have, and then my brother could surprise me with one or two of those choices.

So, we make our way to the aisle with all of the wrestling figures… 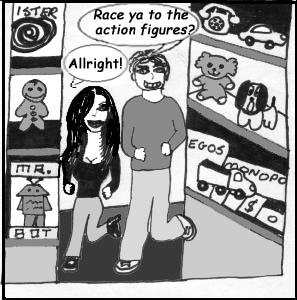 …when what to our wondering eyes should appear… 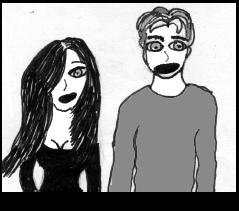 … but an evil yuppie soccer mom with a cart piled with at least $1,000 worth of toys. 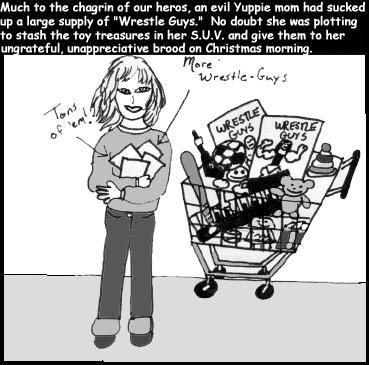 No doubt, these toys were going to be handed out to her spoiled, ungrateful kids. Images of these kids I didn’t even know, tearing open the packaging and then discarding the toys to the side in favor of something much more expensive penetrated my brain, infuriating me. I looked over at my brother and he was similarly seething.

There was no way in hell these little yuppie brats could possibly appreciate the fine detail that some of these action figures had the way that I could.  They’d probably break them in an hour whereas I would give them a place of honor in my living room. All I wanted was a wrestling action figure! Just one damn figure! And this bitch was hoarding them all!

At that very moment, I felt a bubble of gas in my stomach, the results of having downed several delightfully cheesy Gorditas at Taco Bell 20 minutes before. I looked over at my brother. We both knew what we had to do. 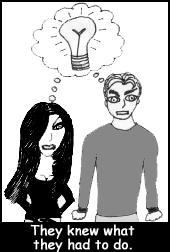 Yuppie Soccer Mom continued piling every non-duplicate wrestling figure into her cart along with the other thousand dollars worth of merchandise already in there. She even managed to put in the awesome Luna Vachon figure into the cart. This was an outrage!! It was one thing to start stockpiling current stars, but to dip into the stock of Legends figures was just too much.

My brother and I put our silent, ninja-like plan into action. We situated ourselves on either side of Yuppie Mom, able to wedge ourselves in on the display case, attempting to pick up an action figure or two. When I grabbed one that she didn’t have in the cart, I caught her glancing disapprovingly at me as I gingerly perused the back of the packaging.

There would be no remorse for what I was about to do next.

Feeling the unique symptoms of the Gordita’s Revenge thanks to the recent Taco Bell jaunt, that’s when I cut one. I ripped the dreaded SBD – the “Silent But Deadly” Fart. For those unfamilliar with the SBD, it exits the premises without a sound, but the swift-spreading cloud of gas and rotten-egg stench emitted is a foul force to be reckoned with.

I continued to contemplate the toys in front of me, gazing stoically at the ones in my hand, pretending that nothing was amiss. Smelling my handiwork, my brother, who cannot contain his laughter even at the most inopportune times, began cracking up. As tears began welling in his eyes (either from laughter or the ungodly smell emanating from my ass that was worsening by the second), he managed to squeak out, “Woo! Something smells kinda stinky!” 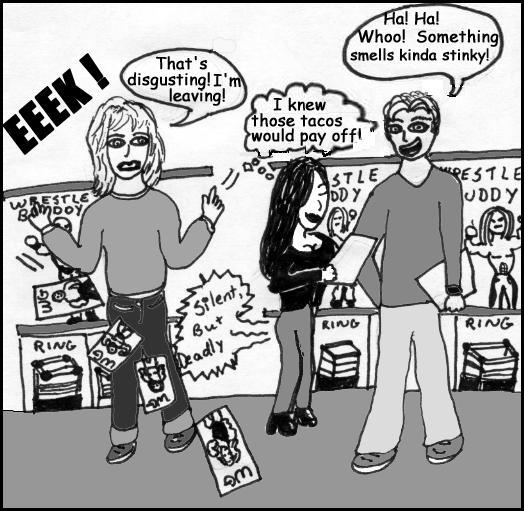 Yuppie Soccer Mom must have (wrongly) thought that my brother was responsible for ripping the juicy SBD. She shot him an even more disgusted look than the one she cast at me for looking at the action figures.

At this point, my rectal mushroom cloud was reaching Hiroshima proportions. My brother continued to laugh hysterically while I maintained a stone face. That’s when Yuppie Soccer Mom angrilly spat out, “That’s disgusting! I have to get out of here!” She looked pointedly at my brother, still doubled over with laughter before running horrified from the aisle.

As luck would have it, she left the entire cart chock full of toys and action figures in the aisle with us. Still revelling in the awesome power of my fart (Admit it! You know you do it, too! Everyone has “Fart Pride” when you rip a particularly bad one!), my brother looked over at me and said, “Let’s loot her stuff!”

“Way ahead of ya, bro!” I replied happily, already eyeing up the contents left in the cart. 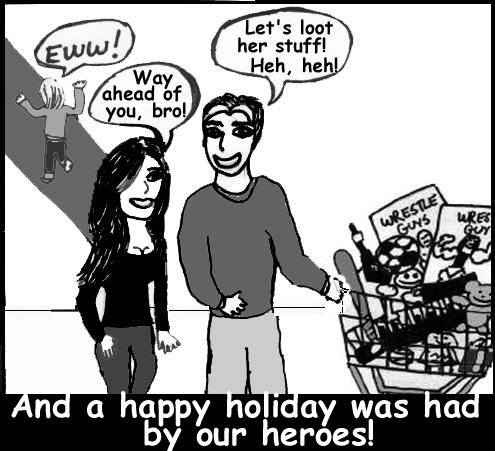 That Christmas, I got a couple of the wrestling figures I really wanted. Most importantly, I got a wonderful Christmas memory and some rather unorthodox shopping tips to share.

That said, stay safe in (or exiting) the malls or shopping centers and make the best of the holiday hell!

And don’t forget to eat your beans before you go out!!