This weekend, I was kicking back and watching TV with my boyfriend when a commercial featuring a showering centaur shilling for Old Spice popped on the tube.

[http://www.youtube.com/watch?v=06TBhGrzyN4] Asking a perfectly, normal, rational question, my significant other posed to me a conundrum stemming from the commercial regarding the implications of interspecial attraction and ensuing relations: “Do chicks find centaurs attractive?”

I paused to think for a moment. I couldn’t speak for the whole of my gender, considering that questions pertaining to the hotness quotient of half-man, half-horse creatures rarely if ever comes up. Outside of Greek mythology, one doesn’t really encounter too many centaurs hoofing it around the supermarket, department stores, or picking up some Doritos at the 7-11 to merit a good session of centaur ogling.

I answered honestly. “I don’t know. I never really thought about it.”

My boyfriend continued to muse upon the subject. “I would think that women would find them attractive. Maybe it’s something primal or that they have big dicks, but I think most women would say centaurs are hot.”

Fully engaged in this rather frank discussion, I pondered this a bit more. “I have to admit, every time I’ve seen a centaur depicted on TV or in movies, they’re always pretty hot. Speaking for myself, I think centaurs are pretty hot. I’d hook up with one.”

He was intrigued. “Do you think they’re hot because they could be ‘hung like a horse’?’”

Answering honestly, I replied, “No. I don’t really think that’s the case. I mean, size isn’t really a big deal to me.”

Pondering it further, he said, “Yeah, it would probably be physically impossible for a human to have sex with a horse. It couldn’t be done.”

“Well,” I interjected. “There was one episode of Hercules or Xena where some chick ran off with the centaur and had a centaur baby.”

“That couldn’t happen!” he replied, in total seriousness. “There’s no way that it could fit without killing the woman.”

“Maybe they played ‘Just The Tip’ or something?” I wondered aloud. (All notion of logic, reality, or the fact that this was a fictional television show we were talking about here seemed to have gone completely out the window.)

“They had to have done ‘Just The Tip.’ Otherwise it wouldn’t work.”

Trying to understand any bizarre, Freudian attraction to centaurs, I rationalized further. “I think centaurs are hot because it’s rare that you see a centaur that’s not in shape. They’re usually ripped. You never see a centaur with a big gut hanging out. Those guys are pretty streamlined.” 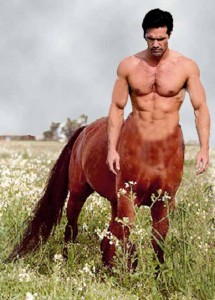 This was turning into a full-blown philosophical discussion as my boyfriend continued, affirming my statement. “Yeah. They’d have to be in good shape since they’re holding themselves upright most of the time. Any sort of a big, protruding gut would pull them forward and throw them off balance, so a centaur has to be pretty built.”

“Yeah.  They look like they take care of themselves.  That’s an attractive feature in any species.”

“You should ask some of your friends at work if they think centaurs are hot. That’d be an interesting point to bring up at lunch. I’d be curious to hear what some other women think.”

My boyfriend is rather aware of some of the odd conversational topics that crop up during lunch break. Last week’s big topic of debate was “If you had to give up one or the other for the rest of your life, would you choose to give up cheese or oral sex.?”.

The almost unanimous choice amongst the mixed group of guys and girls was to give up oral. Only one person in our group answered that he would give up cheese. (I commend this dude on having an utter goddess for a girlfriend.) The rest of us – firm in our resolve to consume dairy delicacies, pizza, and cheesecake — rationalized our decisions on the basic tennant that while you can get bad head, it’s pretty hard to fuck up cheese.

Bearing this in mind, I posed the centaur question to my co-workers. While cheese was still on the menu, apparently, I’m the only female in the group who finds centaurs hot… Or at least admits to it.  As a concillatory gesture, my girlfriends did concur that most centaurs are built well and have just the right amount of body hair.

While a few “Ha, ha! Lana’s into bestiality!” jokes popped up, no one really thought my admission to finding centaurs sexy was too “out there.” One of my co-workers admitted that she could find centaurs attractive, but she usually tended towards skinny, emo guys with piercings. Suddenly, the image of an Emo Centaur sprung to mind with a tail flopped at an angle over his back and sporting a swishy, side-swept mane as he gazed forlornly into his trough of hay and oats, neighing “Nobody loves meeeiiiigh!!!”

With that said, I pose the question to you, dear reader: Do you find centaurs to be kinda hot? Or am I just being crazy, pseudo-bestiality girl here? Mind you, this is just a “you” question regarding your own personal tastes that could make for a fun discussion. Logic does not neccessarily apply, just aesthetics… And a slightly twisted sort of mindset.