Sometimes, you just have to make your own entertainment.

Having found myself in something of a funk this week and last, I started meditating on the simple things that I can be happy about.  Sure, I don’t have another beach-side vacation lined up and I’m not hitting another show until the end of August… But there are some times when you just need to stop and appreciate the simple things in this world that have the potential to make you giggle like a mutha fucker.

This morning, on the way in to work, I kicked it old school.  It’s a brisk ten-minute walk from my house to where I pick up the bus for my morning commute.  Without fail, I listen to my iPod on the walk.  While piping my tunes through my headphones, I decided to utilize an old form of entertainment my brother and I used to use to amuse ourselves.

We were one of the rare families that grew up without cable, occassionally having to watch such important, life-defining programing as music videos (when they actually used to air them) on MTV and Beavis and Butthead at our friends’ or neighbors’ houses.

Having felt cheated out of a steady stream of music videos, my brother and I would hang out in my room, turn on the tube and crank some tunes on the ol’ cassette player (remember those things!?).  Any commercial or television programming that was on would become the “music video” for whatever song was blaring through my boom box.  The most memorable instance of this was set to the tune of Aerosmith’s “F.I.N.E.” off of their seminal 1989 release, Pump.

With lyrics like “But it’s alllllll right / Yo’ daddy says I’m / Allllll right / Your momma thinks I’m allll riight /” and “Whip crackin’ floozy / Way outta control / She got a new kinda jelly in her jelly roll,” my brother and  found heaps of amusement hearing these words synched up with 30-second shills for bran flakes (because yo’ daddy thinks they’re all right!) and in an act of pure synchronicity, a Smucker’s jelly commercial that was immediately followed by Oprah Winfrey right after the commercial break.  For that reason, I (with the possible exception of maybe Stedman) may be the only person to almost always have a mental picture of Oprah dressed in dominatrix garb as the proverbial “whip crackin’ floozy way outta control.”

Drawing upon those fond memories and taking a page out of my 11-year-old self’s playbook, this morning I started envisioning people around me and my surroundings as a music video that I happened to be walking through.  I cued up one of my random playlists full of songs that don’t really make sense together to any other person other than for the fact, at a given time and place in my life, these were songs I was groovin’ to collectively.

Using one of these playlists as fodder for my song-shuffling escapades, the instance with the most F.I.N.E. Oprah-as-whip-cracking-floozy potential was listening to Stallionaire’s “Life of the Party” and watching some old dude shuffle to the bus stop, still looking more spry than the 20-year-old pimple-faced pud who looked like he could bust out with an “OW! My balls!” any second.  Life of the party indeed!  The runner-up image for integration had to be an ’80-something white-haired woman with a wheeled-walker crossing the street to the Goo Goo Dolls’ “Slide”. (A mental picture that will surely add to my case for damnation when judgement day rolls around.)

The fun was about to stop as I reached my bus-stop destination and planned to board the hell-train to work.

That’s when I saw them.  The two guys who would set in motion the hilarity for the duration of my commute.

I noticed two young guys waiting to get on the 84.  The one guy had a normal haircut, but his friend had at least 5-inches of a flat-top afro going on.  This was the first time I’d seen someone rocking this sort of haircut in YEARS.  As in, we’re talkin’ 1994.  I made a mental note to myself that I would be riding to work with Kid n’ Play this morning and just got on the bus.

I took my usual seat in the back.  As a grizzled veteran of public transportation, the back is always where you want to be. Your options are endless.  If you want to be left alone, it’s a great spot to go undetected. Plus,i it’s a prime perch for people-watching.  Or, sometimes, the best action always goes on at the back of the bus where the driver can’t put a stop on the shennanigans because, hey, when you’re driving a 10-ton mastodon of a vehicle, you don’t always look back at your passengers. 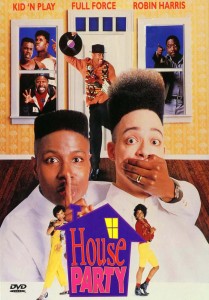 Needless to say, I hit the “stop” button on my iPod because the show was about to begin.  Vintage phrases from “House Part 1 & 2″ were being slung about, much to the chagrin of the now-seated Kid & Play, with the girls adding their own kicks to the mix, my favorite being:
“Hey, Kid?  Did you eat your breakfast yet?  Eat yo’ shit before it get cold, boy!”
and
“That Kid would forget his dick if it wasn’t screwed on.”

I sat there grinning, not quite laughing yet since I felt slightly bad for Kid n’ Play, sitting there stoically unamused by the girls’ comments, which *were* hilarious.

That’s when one of the girls upped the ante.  Standing up and busting out some old school dance moves — such classics as the Cabbage Patch and the Running Man — she and her co-horts began singing “Let’s have a House Partaaayyy-aaay!” and jumping around and dancing.

I had to bust out laughing at this.  I had tears streaming down my face I was laughing so hard.  It was priceless.

When the girls sat down, I said to them: “Hey!  You better calm down.  You don’t want Full Force to show up.”

THEY started cracking up.  One girl screamed out, “Ohhhh SHIITTTT!!  He even got the lady to crack on him!” before high-fiving me.

No one expects the white chick with the Corpse Bride t-shirt and Hello Kitty bracelets to quote House Party, much less do an accurate impersonation of Full Force’s Pee Wee.  It was my Shining Moment of Jamal, minus the dice, big booty love, and bean pie.

As everyone in the back of the bus was laughing and joking, I still felt bad for Kid and said, “I do think the hair’s cool.  He’s doing his own thing, which is pretty cool.”  The one girl felt bad and went over to apologize.  Another girl said she thought his hair was cool, too.

Basically, the general consensus was that the dude’s hair was different and no one’s seen that shit since the early ’90s, but… When you do something like that you HAVE TO expect to get heat from people.  If you’re not expecting people to bust on you for doing something VERY retro, then you shouldn’t do it in the first place.  Have a sense of humor about it!!

The girls at the back then loudly apologized as a group, with the “House Party” dancer as the (loud) mouthpiece, saying “Just so you know, the girls at the Beauty School really do like your hair.”

Another one of the girls looks up at her and says, “Shut the hell up!?  Now people know where we go to school.  You’re gonna get us killed!”

My stop was up and I said goodbye to the beauty school girls and wished them a good weekend and gave Kid some more props on his hair.

This is why I love taking the bus!  Say what you will about the joys and efficiency of driving your own car, but sometimes, public transportation holds untouched wonders for its passengers.