Sometimes, I really think that I’ve been granted that old Chinese blessing/curse: “May you lead an interesting life.”

The “interesting” portion of this phrase seems to extend itself even to my feminine hygeine products.

Two days ago, at approximately 5:15 AM, my boyfriend was getting ready for work while I still had at least a solid hour of slumber left on the clock.  While he was readying himself for his day, he took it upon himself to riffle through the bathroom garbage can and count how many tampons were in there.  Spotting more applicators than actual used tampons wrapped in a protective casing of kevlar-like toilet paper, he took it upon himself to interrupt me from my sleeping state to inform me of this.

“Lana, did you flush one of your tampons down the toilet?  I noticed that there were two applicators in the trash can and no tampons.  Where did the other one go?”

At this juncture, I was still in a semi-sleep state and it didn’t register just how CREEPY it was for him to be mining the trash can for used, bloody wads of cotton.  I was more indignant about my sleep being disturbed.

“Yeah.  That’s because one of them is IN me right now.”

“Well, there’s no tampons in the waste basket.  Where’s the OTHER one from the other applicator?  You can’t flush these things!!!  They’ll clog the toilet.”

I mumbled “Okay” and went back to sleep.

About an hour later, shortly after the alarm went off, I get a phone call from my boyfriend:  “I was wondering if you understood what I had said earlier since you were half asleep.  You really can’t be flushing these things down the toilet.”

By this time, I was much more wide-awake than when he previously began harping on me about this.  “Yeah.  I heard you the first time.  I don’t remember flushing it down the toilet, but if I did, it’s not like I’m going to do it again.”

“I just wanted to make sure you heard me and that you can’t be flushing these things.”

“Well, I’m just SAYING that you need to understand that flushing a tampon could cause serious problems and clog up the plumbing.”

“I’ve lived here for SEVEN years.  In all that time, WHEN have I intentionally flushed a tampon!?  I THINK I know better.  IF I *did* flush it, then it was because I was dead-ass tired the night before and didn’t know what I was doing.  I did not make a conscious effort to INTENTIONALLY flush my tampon down the toilet, OKAY!?”

“I’m just making sure that if the plumbing ever got clogged, that it would be you who would be financially responsible for getting it taken care of.”

“Yeah.  Okay.  You DO realize how utterly CREEPY it is that you had nothing better to do at 5:30 in the morning than go through the garbage looking for tampons, right?”

“Fine.  Whatever.  I hope you have a good day,” he said sarcastically as he hung up the phone with what I imagined to be a grand, pissed off flourish.

Fifteen minutes go by and guess what?  Ring, ring, ring!  It’s the phone again and who could it be?  That’s right, it’s my boyfriend again calling to badger me for the third time in an hour, all well before 7 AM.

“I don’t want to fight with you, but I just DON’T like you being short with me,” he said.

“Well, maybe you shouldn’t be bothering me before 7 in the morning to hassle me about whether or not I flushed a tampon.  All you had to say was, ‘Hey, I think you may have accidentally flushed a tampon down the crapper. Just be careful the next time.”  I don’t need accusations that I maliciously decided to clog the toilet with my twat torpedoes.  Furthermore, I’m on my rag.  I’m tired.  I’m sore.  I’m crampy.  I have hot flashes.  This is not the time to hassle my ass.  Not to mention the fact that it’s WEIRD that you’re looking through the garbage to personally count my tampons.”

“I’m just SAYING that you need to be more careful.”

“If I knew for a fact that I did it or did it INTENTIONALLY, then I would have NO PROBLEM admitting to it.  I don’t know if I did or not.  If I did, then it won’t happen again.  I’ve gone 7 years without flushing them.  Like you don’t make a mistake every now and then when you’re tired?  Why are you making such a federal case out of it?”

“No.  You’re not listening.  You apparently don’t understand….”

At this point, I’d had enough and cut him off. “You know what?  I don’t need this bullshit before I’ve even had breakfast yet.  If you like my tampons so much, I’ll set a couple out for you for dinner.  I gotta get ready for work.  Toodles.”  I hung up the phone on him.

I envisioned myself yanking out my tampon, twirling it around my head like Indiana Jones with a bloody bullwhip and winging it directly into his face.  My inner Donita Sparks moment provided me with a grade A mental image, complete with a shocked and appalled facial expression on the part of my boyfriend.

Thinking about this further on the bus ride into work, I mused over the ludicrous nature of this entire situation.  I told my friends at work about it, and they seemed to get a big kick out of it.  And every single one of them was struck by the same thing as I was: “Why the hell is he looking through the trash for your tampons?!”

Thank you.  At least I’m not the weird one here!

Since my personal life is such comedy gold, my friends and I had a good laugh about this.  I even had an idea for an art project, making a mobile from my used tampons that I could hang above my boyfriend’s precious X-Box so he can think of me every time he boots up his console. 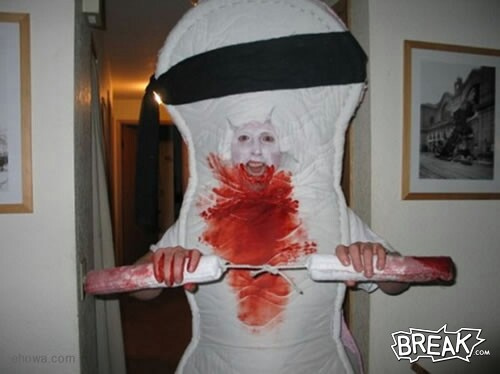 After work, I came home expecting a confrontation.  Instead, I got the mopey, cold shoulder from my boyfriend.  He didn’t act pissed off, just more distant than usual.

I go to work, thinking this thing has pretty much blown over.  I come home, grab my shower, and go to eat dinner. That’s when the continuation of the Tampon Triffle reaches critical mass once again.

Sitting down with his turkey hoagie, my boyfriend says “I hope you had a good day today…. Because you RUINED my day yesterday and today with your bullshit!!!!”

I smiled cheerily.  “Actually, I did have a really good day yesterday and today.  I don’t see why you should have let that whole tampon issue bother you.”

“Only because you got pissy with me and then hung up, after the fact that you were bothering me early in the morning.”

“You were the one raising your voice at me!”

“Only because you did it first.  How would you feel if you were being annoyed at 6:00 in the morning about something ridiculous?”

“It’s NOT ridiculous!  You could have clogged the toilet!”

“Seriously.  All you had to say in the first place was, ‘Hey, I think you may have flushed the tampon down the toilet. Just make sure you don’t do it again.”  Instead, you made a big production out of it and beat the issue into the ground like I’m some sort of idiot or that I did it intentionally.”

“You ARE being stupid about this whole thing.  Why don’t you admit that you flushed it?”

“I do make mistakes.  But I admit them when I do them!”

“Okay, so your bathroom habits are perfect?  You never worry that one of your massive, prune juice-fueled dumps are going to overflow the toilet?”

“No, because my shit does not expand with water like a tampon does!”

“I flush first and then wipe.  Then flush again.”

“Ah!! But what IF you’re tired and you absentmindedly forget.  Do you REALLY keep track of what you’re doing after you’ve unleashed a monster turd!?”

“YES!  It is!  Which is exactly how I felt for being put on trial for accidentally flushing a tampon.  So how about next time you go to the crapper, I listen at the door after you’ve pinched out a loaf and make sure that you flush it first and THEN you can wipe while I watch and make sure you flush your toilet paper separately.  Because that wouldn’t be NEARLY as weird as you digging through the garbage on a quest to discover my tampon-to-applicator ratio!”

“It’s a good thing I WAS digging through the garbage and found that out!”

“Yes.  A national crisis was averted because you were looking for used tampons.  God only knows what would have happened if you didn’t look through the trash.  I’ll go alert CNN!”

“You’re being such a BABY!”

“You’re the one who still stayed pissed about this for two whole days and then brings it up out of the blue while I’m trying to watch TV.”

“That’s because you can’t admit that you flushed the tampon down the toilet! And you’re not even sorry you ruined my day because of this yesterday!  This is a serious issue and I don’t have the money to pay for a plumber to unclog the toilet.  I want to make sure that YOU know that you would be financially responsible for paying for a plumber if that happened and I doubt you have the money for it, either.”

“Dude.  ONE tampon is not going to jam up the works.  I could see if I did it all the time, it would be a problem.  If I did do it, I did it ONCE.  You’re the one making a huge issue out of it.  If I knew I intentionally did it,I’d admit it.  But I don’t remember if I did.  I was TIRED.  Jesus Christ, let it GO already!”

Somehow, the argument was finished and I suppose everything is back to “normal.”

I came in to work today and informed my friends and co-workers about Part 2 of the Great Tampon Caper and they found it as amusing as I did.  Still, the part of the story that gets the best reaction out of everybody is how he insists that it was a true, blue miracle that he was digging through the trash and discovered that there were no tampons in there.  That he feels that he should be given a medal of honor for doing something that is beyond WEIRD.

Perhaps I should apologize to my boyfriend that no bestringed, besmirched, blood plugs were in the waste basket for him to savor.  If I had only known how fond of them he was, I could use them to flavor that marinara sauce he found to be so lacking with last night’s breadsticks. I’m sure it would have given them a robust flavor that he has never experienced.  Shame on me.

The moral of the story to remember here is that even though girls get their periods, guys can be bitches, too.