definition: The act of making exaggerated facial expressions or bodily movements to a non-existant camera in response to acts of stupidity on the part of those around you in the manner of sitcom actor, Norman Fell, noted for mugging the camera and breaking the fourth wall.

I had an interesting conversation with my brother the other night that brought about an epiphany born of a certain, sitcom character actor by the name of Norman Fell.

All week, I’ve felt like snapping at someone who asks me something stupid (which has been happening a lot lately), or telling people to “shut the fuck up already.” My fuse has been shorter than usual.  Apparently, my brother had been feeling the same way this week.  Come to think of it, so have a lot of my friends.  For some reason, it’s just been one of those weeks.  One of those long, slow, boring, and maddeningly annoying weeks.

In light of the general ambiance of this last span of seven days, my brother made a rather astute observation.

He asked me:  “Do you ever pretend that you’re on your own sitcom? Like when an asshole leaves the room, you mug an invisible camera and roll your eyes or give them the finger behind their back?”

Yeah, actually.  I do find myself doing that a lot. Even though there’s no one in the room with me, I find myself rolling my eyes or throwing my hands up at the stupidity of whomever exited or passionately procuring a middle digit aimed in their general direction.

Let’s face it.  As cool as it would be to have your own personal theme music play every time you walk into the room, it isn’t exactly feasible.  Nor is being able to break out into song at random, yet opportune moments throughout the day. Even within the confines of reality, in terms of social convention, there are still limitations. You can’t exactly tell someone to “piss off” or flip them the bird to their face, so the next best thing will have to do. In this era of reality television programming, maybe subconsciously, we all play to an invisible camera as a means of coping with the more mundane aspects of our lives.

Having grown up with first-run and later rerun episodes of “Three’s Company,” during the course of our conversation, my brother and I dubbed this phenomenon, “The Norman Fell Complex.”

For those of you unfamilliar, Norman Fell played the original landlord on the show, the catankerous Mr. Roper.  Most of the show’s early episodes’ plot lines were a direct result of the uptight, 50-ish Roper believing the ruse that super-straight Jack Tripper was gay.  While Mr. Roper was a bit perturbed, if not amused, by the thought of a “gay” man living in his rental, he otherwise would not have approved Jack, a straight man, as a tennant, living with two girls.  Hilarious hijinx ensued as Jack Tripper put up a gay facade around Mr. Roper, delighting in making him squirm with homophobia.

The highlight of these early episodes (for me, at least) was Norman Fell mugging the camera withough fail, at least once per episode.  Yeah, the slapstick antics of John Ritter were hilarious, however, Norman Fell was the Charlton Heston of comedy in terms of chewing scenery.  In an act rarely associated with situational comedy, Fell fell back upon his stage skills to toss out overly exaggerated facial expressions that completely broke through the “fourth wall” and convey his character’s message directly to the audience. 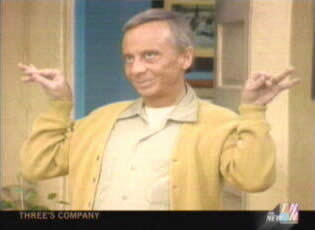 “Norman Fellation” applies this concept to every day life.  You could be in the room by yourself, moments after the offending party exits your space.  No one else is really looking, but yet, you feel compelled to give into the absurdity of the situation, heightening that absurdity by parlaying it into an act more befitting a sitcom than an actual “real life” moment.

I talked this over with a few friends and co-workers, and they find themselves doing the same thing, too.

Good to know that this phenomenon wasn’t limited solely to others I share common DNA with.

Upon further thought, I wonder if the assholes who are usually responsible for these fits of eye-rolling and general Norman Fell-ery/Fellation, ever do this themselves? Or are they just life’s equivalent of the snide customer who comes in to the shoe store to harass Al Bundy.  Are there some people out there whose sole purpose to elicit such a reaction in others?

I’ll have to remember to ask someone that the next time they annoy me to that point.